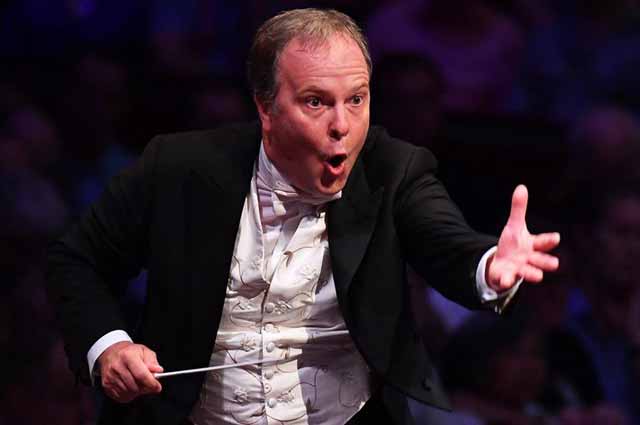 It seems that this summer’s top nation is France – whether on the pitch or in the Proms Arena – and Wednesday night’s combination of two pieces with French (and American) connections was a masterly piece of programming. The similarities between Messiaen’s Turangalîla Symphony (commissioned in 1946 for the Boston Symphony Orchestra) and Gershwin’s An American in Paris (heavily influenced by the composer’s studies with Ravel) run deeper than mere nationalities; both are strongly influenced by jazz (notwithstanding Messiaen’s rejection of the musical form), and hearing the two pieces at a sitting made for some startling connections. Both works employ lush string melodies, alternating warmth and aggression in the brass, and bluesy little woodwind solos. Uncannily Turangalîla’s love theme becomes almost a slightly warped version of the romantic theme in An American in Paris – especially when it appears in the muted trumpet in the fourth movement, or as a lush brass serenade in the eighth – and one can almost imagine a missing Wagnerian transformation from one motif to the other.

Sakari Oramo and the BBC Symphony Orchestra brought out the best of both pieces, and the brass of the orchestra deserve special plaudits for their flexibility – summoning all moods from the stern solidity of the ‘statue’ theme in the Messiaen to the louche, smoky sexuality of trumpet and trombone solos in the Gershwin.

An American in Paris was performed in a new ‘critical’ edition by Mark Clague (although there was no explanation of what this was in the programme notes). Gershwin’s early scoring for full orchestra was in evidence, and Oramo and the orchestra gave it a solidity that it can sometimes lack, but it was not short of moments of whimsy: the taxi-horns were wheezily out of tune, and the opening was sufficiently light on its feet to dodge the worst of Paris’ traffic. The changes in texture were adroitly handled, from the warm string repetitions (with splendidly Paul-Whiteman-esque wind interjections), through the swing of the bluesy bugle, to the solid locomotive drive and the bumpy final re-iteration of the main theme at the close.

Turangalîla, too, is full of changes in texture, and by and large, the performers executed these well, although there are moments where some care needs to be taken to cover the joins in Messiaen’s mercuriality, and these weren’t always slick: ‘Turangalîla 1’ felt more fractured than usual, and the busy romp of ‘Joie du sang des étoiles’ lacked the abandoned fluidity it does in some performances. That said, there were some glorious moments: the descending ‘laughing’ patterns of notes in ‘Introduction’ (from piano, brass and flutter-tongued trumpets and clarinet); the opulent strings in ‘Chant d’amour’; the fantastically chaotic close of the same movement that felt in need of the award of a penalty; the line-up of three keyboard players (piano, celesta and keyed glockenspiel), carefully placed front-stage to make the most of their spotlighted moment in ‘Turangalîla 3’.

It now seems customary to place the piano and ondes martenot at the front of the stage for this work, and it certainly paid off for this performance. Angela Hewitt’s piano playing was superb; it’s a challenging part (full of rapidly hammered fistfuls of notes), and she tackled it with the bravura and élan of a Griezmann, her right-hand-raised grandes gestes adding to the drama. The ondes-marteniste Cynthia Millar was giving her sixth Prom performance of the work, and, as ever, completely at home with her instrument, whether in the lyrical melodic lines, the grand whooshes, or the little chirps (that sounded oddly like the Albert Hall ticket-swiping machines). In all, a trophy-winning performance. Allez les Bleus!