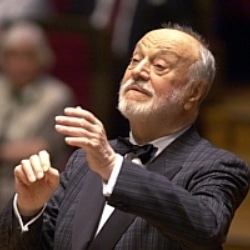 Henze has had more works played at the Proms than almost any other living composer and this was his latest London premiere.Five Messages for the Queen of Sheba is made up of short extracts from what the German composer says will be his final opera, The Hoopoe, or the Triumph of Filial Love.

The opera received its first performance at Salzburg three years ago and, with a libretto by the composer, is an amalgamation of storylines from 1001 Nights. The suite consists of five sections that Henze put together specially for the Orchestre National de France, who have an impressive track record of premieres including Messiaen’s Turangalla Symphony and works by Boulez, Varese and Dutilleux.

While Five Messages for the Queen of Sheba gave an appetising taster of the opera, and I hope we will see the full work in London before too long, it was a little dry and unexciting taken out of context. A mobile phone that went off very loudly in the middle, and must have been heard on radio and also possibly television, didn’t help.

If the Henze was short (just a twenty minute first half), the evening made up for it with Shostakovich’s longest symphony which is of Mahlerian length. The first performance of the 7th Symphony in Leningrad on 9 August 1942 was one of those legendary musical events, like the first night of The Rite of Spring, that one would have liked to have been at. Maybe, as the city was still suffering a devastating siege at the time, that’s not literally true, but to a population starved of much more than just music, it must have been an extraordinary event to witness.

Context arises again here. Great music shouldn’t have to rely on specific social and historical circumstances for its success but a work like this will inevitably mean far less to a rich comfortable audience with little genuine danger threatening it. I found that the Leningrad Symphony is not quite great enough to communicate the composer’s feelings to me in 21st Century London.

It has one of the most stirring openings of any of Shostakovich’s symphonies, which soon lapses into a dreamy, idyllic state played on solo piccolo, then taken up by the solo violin, before the distant militaristic rattle of the side drum. What follows is one of the most derided themes of Shostakovich’s output, the so-called “war machine” episode. The composer himself was aware of the dangers of this highly repetitive and simple tune, saying to fellow composer Aram Khachaturian “Forgive me, will you, if this reminds you of Ravel’s Boléro“. That’s not in itself a bad thing, I’d say.

Whatever his own reservations about this section, Shostakovich had the courage of his convictions and I think we should too. If the theme, depicting the onslaught of military might is monotonous, it portrays the banality of evil in music that builds to an incredibly exciting climax as the music spins out of control. Masur took the section at a leisurely pace that threatened boredom but eventually reached an appropriate level of excitement. The earlier themes return but now nothing is the same and the first movement ends with a chilling reminder of the ever-present military threat.

Much of what follows is less obviously programmatic. I have to say the third movement is not Shostakovich’s finest adagio, although there’s an attractive flute solo, well-played here despite some noisy intakes of breath. The following allegro is somewhat over-written and loses its way at times, before returning to the symphony’s opening theme in triumphant style.

Masur gave a well-articulated reading with fine playing by the French orchestra and some excellent solo work, particularly in the woodwind. The shortcomings of the evening were probably down to a main work that ultimately doesn’t quite satisfy, whatever its significance historically.