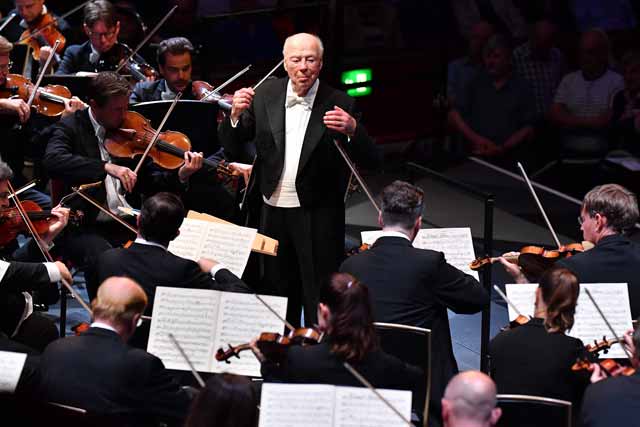 We all knew the day would come when one of the world’s most revered and admired conductors, Bernard Haitink, would take his final bow in the UK. An integral part of musical life in this country since the ‘60s, he has enriched the lives of countless musicians and audiences through his numerous appearances on the concert platform and in the opera house.

The original plan was for him to take a sabbatical – having just turned 90, no one could begrudge him a rest from his podium duties, but the sabbatical gradually turned into retirement. And what a farewell tour it’s been, culminating in three concerts given with the Vienna Philharmonic in Salzburg, London and Lucerne.

This was certainly the hottest ticket of the Proms – not surprisingly the Royal Albert Hall was packed to the rafters – with an attentive and appreciative audience. Indeed, you could have heard a pin drop throughout both performances, a stately Beethoven 4th Piano Concerto, and Bruckner’s mighty 7th Symphony.

Emmanuel Ax was the soloist in the Beethoven, standing in for an ailing Murray Perahia, and what a first-class substitute he proved to be. Given the fact he and Haitink have worked together on numerous occasions over the years, the rapport between the two was obvious. Arpeggiating the first chord, Ax’s persuasive yet delicate playing was underpinned by velvety support by all sections of the Vienna Philharmonic Orchestra. Marked ‘Allegro moderato,’ Haitink veered more towards the moderato, but his unhurried approach certainly paid dividends, as it gave the orchestral texture wonderful clarity. Ax dispatched the first movement’s cadenza with technical brilliance yet his performance was never ostentatious. He mined the depths of the dark soul which lies at the heart of the second movement, transitioning into the ebullient third with perfect ease. For an encore, he gave us a sensitive rendition of Schubert’s Impromptu in A.

Given his lifetime association with the symphonies of the Austrian composer, who else could Haitink bow out with than with Bruckner? It was also a fitting farewell given Haitink made his Proms’ debut in 1966 with the Seventh. Although our concert-going doesn’t stretch back that far, his magisterial performance of this symphony with the LSO four years ago brings back happy memories. Few conductors, if any, understand the composer’s sense of musical architecture like the Dutch maestro – his affinity and deep understanding of the score was evident in every bar.

Haitink has never been a conductor prone to grand gestures or posturing on the podium, so an almost nonchalant flick of the baton ushered in proceedings, while using his left hand sparingly to mould orchestral lines and summon up more volume. There was a grandeur to the first movement that took us aback, benefitting hugely from Haitink’s natural unfurling of the main themes. Never intrusive, or micro-managing he simply let the music speak for itself.

The inexorable build-up of the second movement felt like the musical equivalent of climbing a mountain; the chorale-like writing for the tubas providing an apt musical eulogy to Bruckner’s idol, Wagner, whose death is writ large throughout. The climatic cymbal clash and triangle trill (Nowak edition) can sometimes sound vulgar in the wrong hands, but here seemed the perfect response on reaching the summit.

Throughout the final two movements, the playing of the Vienna Philharmonic never faltered, with some remarkable work from the brass and woodwind, not forgetting, of course, the wonderfully velvety strings for which this orchestra is renowned. After the exultant climax, the audience held its breath, then let out a mighty roar of approval. Rising to its feet in unison it cheered Haitink to the rafters. Musical life in London will seem empty without him, but if anyone has earned a happy and long retirement, it’s the great Bernard Haitink.