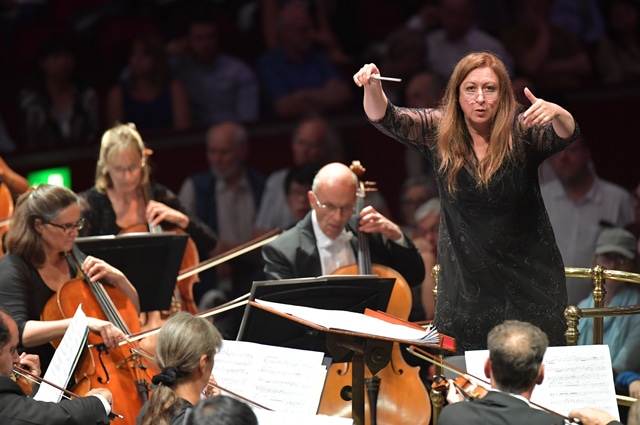 This enterprising Prom from the BBC Symphony Orchestra under Simone Young, making her Proms debut, had several things to recommend it. First, the repertoire ranged from an engaging world premiere of Bayan Northcott’s first orchestral work, via a delightful Mozart concerto and concluded with a rich Romantic score from Zemlinsky. Second, the soloists each brought something to their performances, though sadly the performances were not uniformly of the first order. Lastly, the BBC Symphony Orchestra gave committed playing under Simone Young’s efficient direction. Ultimately, though, it proved to be a concert of two uneven halves.

Bayan Northcott’s reputation as one of the most prominent music critics and writers on music in London over the past half century has perhaps overshadowed his work as a composer.  The Concerto for Orchestra, recently completed and written over the past two years, is Northcott’s first work for full orchestra. Lasting barely 18 minutes, its three brief and linked movements displayed few qualms at taking on the large scale instrumental forces at his disposal. That said, Northcott’s own programme note for the work voiced his concern that the music was “that most stringent challenge to composers”, namely to write music that “fresh and personal” and that can be “widely understood by the concert public”. The opening Allegro con brio in sonata form was a feisty number that began with brightly prominent brass above brisk, tutti strings that displayed a keen ear at work, with a constant concern for the shifts in sonority and timbre that were achievable by the snatched instrumental motifs being variously juxtaposed across an increasingly wide instrumental soundscape. If the movement was lyrical at its heart, then it sounded at times as if it longed for some sound aesthetic from the past. The central Adagio found some beauty in its sense of stillness, before its atmosphere transformed through a densely scored soundscape to something that threatened to cloy, yet avoided doing so. This dissolved into the Allegro molto finale, which transformed a muted and deftly scored full orchestral sound into a nervous tutti that variously lumbered uneasily along interspersed with more rapidly scored elements of brilliance that gave prominence to the percussion. The work was enthusiastically greeted by the audience. Northcott himself was all smiles as he took his bows on the podium and thanked Simone Young and the BBC Symphony Orchestra. Certainly, this most exacting of critics gave little if anything away as to his true opinion of the performance.

Mozart’s fifth violin concerto, performed by the BBC Symphony Orchestra with reduced forces and the brass brought forward on stage to sit immediately behind the strings, was given with Baiba Skride as soloist. Her cantabile tone, drawn with ease from the ‘Yfrah Neaman’ Stradivarius was a prominent feature of the opening movement, which was aptly backed by the orchestral strings. Occasionally the balance between strings and horns was not ideal, as the brass phrases did get momentarily lost in tutti sections. The suppleness of Skride’s playing of the exposed solo line in the middle movement was a delight to hear –  at times her tone sounded almost autumnally burnished, whilst possessing total integrity across the range due to her assured bowing and judicious use of vibrato – factors that have long marked her out within the top flight of today’s violinists. Her cadenzas (in the first and second movements) were the Joachim time-worn standards, and though excellently played, perhaps left one wanting more of Baiba Skride’s own personality in these moments. The lively Rondo finale flowed effortlessly at first, before Skride the BBC Symphony and Simone Young delighted in the tangy ‘Turkish’ (in actuality, rather more Hungarian in flavour) exoticism of the melodic leaps, rhythmic emphases and col legno effects. Prommers were rewarded with an encore, for which Baiba Skride played a solo sonata movement by the rarely encountered Johann Paul von Westhoff.

If the first half was successful in performance terms, the second half – devoted entirely to Alexander Zemlinsky’s Lyric Symphony (1922-3) – raised significant doubts. Simone Young is experienced in performing large-scale late Romantic works, such as Schmidt’s Das Buch mit sieben Siegeln, and she certainly brought enough of the requisite sweep and grandeur to be evident from the BBC Symphony Orchestra. Listening to Zemlinsky’s song-symphony concerned with that moment of separation realised between two lovers, it’s tempting to dwell on the creative love triangle formed by Alma Werfel, Zemlinsky and Mahler, her two most famous lovers. In the quest for Alma’s heart, Gustav won out, as indeed he did if you consider the position Das Lied von der Erde enjoys in public’s appreciation when compared to Zemlinsky’s Lyric Symphony. In the seven alternating songs from one partner to another, baritone Christopher Maltman and soprano Siobhan Stagg, projected their heartfelt passions and despair towards the audience, and not each other. Perhaps that was one of the issues, with the soloists separated by Simone Young’s podium, the work failed to realise its emotional potential. Both Maltman and Stagg, seemed at various points to be over-parted in their roles too, with their words losing their intensity against the generous excesses of Zemlinsky’s broad orchestration. At their best though, in the final three songs, Maltman and Stagg echoed the orchestra’s long passages to speak eloquently of the emotion of loss. If, at its close, one might sense that Zemlinsky might have being speaking through the text’s own words to himself, ‘Let love melt into memory and pain into songs’, again there was a distant echo of a Mahlerian state of mind. Truly, it’s not always easy to pinpoint the moment when love is born, but we all know for certain the moment when love has died.