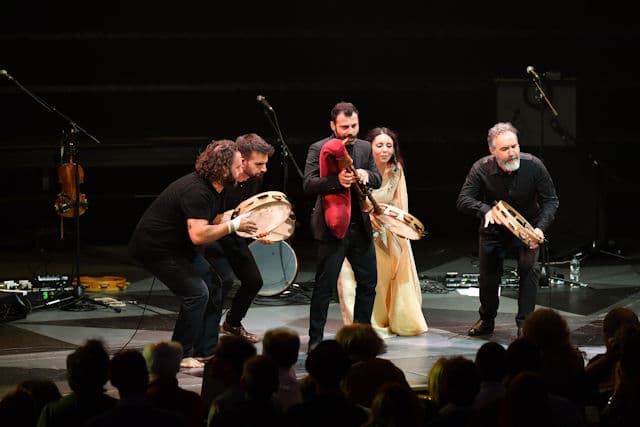 Pizzica is a music and dance form specific to the Salento peninsula, and it is part of the wider tarantella style of folk-dance, supposedly a cure for the bite of the tarantula spider; in reality its unrestrained nature is more about the purging of personal psychological poisons. Wednesday evening’s late Prom was part of Canzoniere Grecanico Salentino’s mission to bring pizzica tarantata to wider audiences and to position it as a ‘world music’ alongside Portuguese fado and Spanish flamenco.

Their style, though, as demonstrated in a breathless performance of 13 numbers, takes the original material and moulds it to modern sensibilities, and they pulled in, alongside the traditional tamburello frame drums, organetto accordion and violin, not only instruments from other cultures (the Greek bouzouki, the West-African kora and electric guitars) but amplification and electronic manipulation.

Canzoniere are certainly masters of their art, and they whipped up a truly frenzied storm of music that had members of the arena audience jigging about. One could see the attraction of the form as a kind of head-banging folk music, or even as a variant of 90s trance: music to dance to when all that is needed is a strong rhythm, plenty of texture, some solo work to admire and occasional snatches of simple melody. The flexibility of skill sets of members of the group was also admirable. Players switched from violins to frame drums; from bouzouki to Ashbory bass, and deployed a variety of unusual wind instruments (including zampogna – Italian bagpipes – deployed to play some enjoyably Byzantine chant-melody in ‘Tira Cavallu’), as well as singing in the raw-edged style that is essential to folk music. 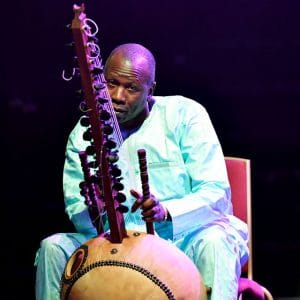 In all, though, the 95 minutes made for a somewhat relentless concert. The nature of pizzica is its almost complete lack of harmonic shift – it is not unusual for almost an entire piece (‘Intra la danza’, for example, or ‘Rirollalla’) to be based on a single drone note, which just occasionally shifts, only to return to its anchoring position; the musical superstructure is essentially Middle-Eastern-influenced minor-key material with occasional lingering on close discords. The introductions to songs were often quite mellifluous (such as the gentle bouzouki plucking that opened ‘Bella ci dormi’ or the rocking guitar pattern laid down at the beginning of ‘Ferma Zitella’), but it was not long before the trance-like rhythm set in over a one, two or three-chord pattern, and variation was reduced to the occasional riff from a solo instrument or from gutsy vocals full of passionate intensity: great for a live, interactive, relaxed festival, but stilted in the atmosphere of the Albert Hall. The endless repetitions of a two-chord organetto passage at the end of ‘Taranta’, for example, that in a party atmosphere would have been a fiery incitement to dance on, became almost unendurable.

Perhaps the most interesting and enjoyable numbers from a purely passive listening point of view, were those that included the kora, played by virtuoso Ballaké Sissoko. It’s a fascinating instrument that is capable of so much – from a guitar-like melody, to the overlapping arpeggios that a harpist might employ – and, at the opening of ‘E Chora te Anemu’, Sissoko gave us a beautiful demonstration of all of its possibilities.

Of the dancing there is little to be said, other than it was well executed. Like the music, there is little about it that is complex, but Silvia Perrone presented a stylish visual accompaniment to the musical material.