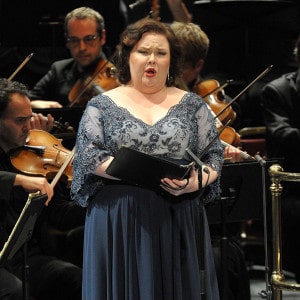 Goethe, some of whose verses (from ‘Harzreise im Winter’) Brahms set to music as his Alto Rhapsody, famously said that “architecture is frozen music”. Anyone wishing to hear what a defrosted Albert Memorial could sound like, might have listened to Triumphlied at last night’s all-Brahms evening. It is rarely performed (it was a Proms première), and probably rightly so; it has touches of Handel, Beethoven and Mendelssohn to it, but is as good as none of them – stretching three short Biblical stanzas of celebration into 25 minutes of tedium punctuated by fanfares and Hallelujas, and written in celebration of the founding of the Kaiserreich in 1871 (also buried under the weight of its own over-extension). This is not to say that it was a bad performance – The Orchestra of the Age of Enlightenment under the visionary Marin Alsop gave an excellent rendering, and The Choir of the Enlightenment turned in a well-controlled and appropriately grandiose performance. The baritone, Benjamin Appl, has a beautifully mellow voice, and he should save it for smaller spaces and more intimate works, as, like the statue of Prince Albert across the road from the Albert Hall, his barely two minutes of singing was lost amid the flamboyant over-decoration going on around it.

The evening was more than redeemed, however, by the pieces surrounding Triumphlied. The concert began – suitably for back-to-school week – with the 1880 Academic Festival Overture, which was given a brisk performance that reminded everyone what a joy it is to hear the earthy sounds of a period band playing symphonic repertoire. In truth, the instruments in the Orchestra of the Age of Enlightenment are probably a little early for Brahms, but the throaty trumpets and edgier crooked horns make a wonderfully raw sound that gave a student-celebration recklessness to ‘Gaudeamus Igitur’.

Alsop didn’t linger, either, over the performance of Alto Rhapsody, for which the men’s voices of the choir and the orchestra were joined by the American mezzo-soprano, Jamie Barton. It is a pity that these days the term ‘mezzo-soprano’ covers all lower-voice female soloists, because this is absolutely a piece for an old-fashioned contralto, and it was performed majestically as just that. Barton produces some beautifully sweet top notes, but her lower register is magnificent – the bottom A-flat was especially sonorous. The balancing of soloist, chorus and orchestra (which, in spite of pizzicato strings, contains horns and bassoons) in the final section of the work is difficult to achieve, but Alsop managed it with the delicacy that is her trademark.

The final piece of the evening was Brahms’ first symphony – often dubbed “Beethoven’s tenth”. It is certainly a tribute to the great man, but it is arguably much better than Beethoven’s ninth symphony – the thematic development is wonderfully handled, and there are surprising harmonic twists that outclass Beethoven’s writing and take the concept of a symphony forward for a new generation. Alsop made the orchestra work for this performance, and they pulled out all the stops allowing Brahms’ brilliance to shine. Again, her speeds were sometimes on the sprightly side, but the moody opening of the first movement was portrayed with subtlety, and the warm string passages and woodwind flurries of the two inner movements given nuanced degrees of light and shade. In the final movement, the majestic rendering of the Beethovenian theme outstripped, in sheer spine-tingling majesty, any of the earlier bombast of Triumphlied. A bravura performance of one of the Brahms’ Dvořák-orchestrated Hungarian Dances rounded the evening off as a perfect encore.