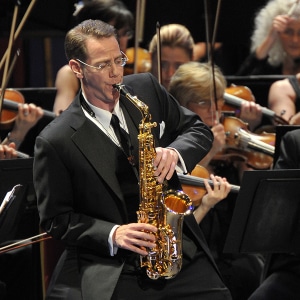 Mahler’s Symphony No. 1 in D major (1884-8, rev. 1893-8) is widely recognised as “the culmination of everything Mahler had written up until then”. In the hands of the BBC Symphony Orchestra, under the baton of Marin Alsop, it certainly felt that way, although for different reasons to those provided by many other performances. This was not a reading that played the symphony as a warhorse of the repertoire, where the wealth of ideas contained within it reached the audience’s ears as part of a heady mix that could blast them off their feet. Rather, in this immensely accomplished performance, it became possible to connect with the music on a more detailed and personal level, engaging with every phrase, idea and influence, and understanding the ways in which these were structured to create such moving effects.

From the first movement onwards the balance across the entire ensemble was exceptional, which also enabled the entire range of orchestral textures and hues to come to the fore. The net consequence was that the symphony felt a notch closer perhaps to sounding like a ‘Symphonic Poem’ or ‘Tone-Poem’, the terms with which Mahler described the first version of 1889. I was particularly struck by the sheer extent to which the orchestra soaked the third movement in irony, precisely by demonstrating such precision and balance in sound, and this reflected part of its wider strategy for creating such a coherent approach to the work. The second movement has been described as ‘one of Mahler’s few movements without a trace of irony’, but the wind sound here did seem to allude to that generated in the following movement. Predictably perhaps given its nature, the final movement was where the performance best combined balance, texture and indeed sensitivity with energy and panache, and in this way it capped a stunning account.

Immediately before the Mahler was performed, Colin Matthews awarded Marin Alsop Honorary Membership of the Royal Philharmonic Society, pointing out that in its 200-year history this had only been granted to 140 people (the first recipient was Carl Maria von Weber, and others include Berlioz, Clara Schumann, Toscanini and Menuhin). It felt like a fitting tribute to someone who dedicates so much of her time to bringing music into people’s lives through a wealth of schemes, and Matthews described Alsop as a role model for twenty-first century musicians. Given her long association with the Proms, which culminated in her conducting an outstanding Last Night in 2013, the Albert Hall also felt a highly appropriate setting for the presentation.

The first half of the concert was given over to works by John Adams and featured the UK premiere of his Saxophone Concerto (2013). It consists of two parts, with the first containing a fast and a slow movement and the second comprising, in Adams’ own words, ‘a species of funk-rondo with a fast, driving pulse’. The composer distinguishes between the ‘classical’ approach to saxophone playing with its fast vibrato, and the looser, grittier jazz style, and recognised that he was expecting a lot by taking Timothy McAllister, a saxophone player pre-eminent in the first approach, and asking him largely to adopt the latter.

McAllister played brilliantly and, though the piece is not minimalist, traces of that style do seem in evidence in the rhythms and bowing of the strings. In sum, the piece feels like a halfway house between a classical concerto and a piece of jazz, and when we consider that Glazunov’s Saxophone Concerto in E flat major (1934) lasts a mere 14 minutes, it makes us realise just how much new ground Adams is breaking with the work. He suggests that at 32 minutes it is ‘an unusually expansive statement for an instrument that is still looking for its rightful place in the symphonic repertory’, and the concerto similarly seems to be feeling its way in exploring how a saxophone can work with an orchestra. This is not intended as a criticism, and we may presently look back on Adams’ creation as a seminal work in advancing the instrument’s role, but it contrasts with his Short Ride in a Fast Machine – fanfare for orchestra (1986) that opened the programme, and which stands as such a neat and perfectly polished composition.

This Prom was broadcast live on BBC 4, and will be available on BBC 4 iPlayer for seven days and Radio 3 iPlayer for thirty days. For further information on this and all BBC Proms click here.