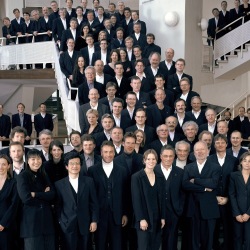 It’s taken 64 concerts to get there, but at last the Proms was host to a Mozart performance of which they can be proud.

Sir Simon Rattle‘s had a hard time of it in the German press lately, but this performance suggested that both he and the Berlin Philharmonic are still on top of the world.

In particular, the orchestra’s flexibility was very much in evidence, coping well with a typically eclectic Rattle programme of two Mozart symphonies, a London premiere and an orchestration of Debussy piano miniatures.

The evening was bookended by two Mozart symphonies in the key of G minor. Symphony No 25 (K183) opened the programme, and at once the orchestra’s intelligence, focus on the task and beautiful sound all came to the fore. The arresting four-note opening was followed by the rigorously-played violin theme. One noticed the sonic tricks created by the division of the violin sections on either side of the platform, and the unity of sound in the entire ensemble was exceptional. The horns were in great shape in their canonic entries in the development and also played the fanfares in the coda with security and confidence.

Then the violins launched into their memorable second movement theme, with bassoons in thirds providing ample support. The second subject group introduced the wonderful oboe soloist, who was to shine all evening, but the principal flautist and horns were equally excellent. The memorable aspect, though, was the combination of light and dark: even in the warmer E flat major passages, the double basses murmured worryingly underneath. Rattle brought out the drama as few conductors today really can.

The third movement was an elegantly-phrased Minuet, with the trio bringing the oboe, horns and bassoon to the fore again, and the second violins’ detailed lines were particularly notable. As a finale, though, you could not hope for more than the Berlin Phil gave here with Mozart’s big, joyous theme. No matter what anyone says, the warmth of their string sound is still unrivalled, and it was amazing that the orchestra found some quiet dynamics but managed to project into the hall better than any other orchestra I’ve heard at the Proms this year.

Talking of which, the orchestra then gave the most convincing performance of a new piece I’ve heard at the festival this season. Well, it’s not totally new: Hanspeter Kyburz’s Noesis was written in 2001, but this was its London premiere, and I was pleasantly surprised by its impact. Kyburz seems to have the best of both worlds: he has extensive training in philosophy, musicology and electronics, but is still interested in the surface affect of his works. He created the piece with the help of a computer, so that he knew how it would sound in performance. This seems to have worked, for each of the three movements of Noesis seems to have a point, but at the same time it’s highly engaging on an emotional level.

The first movement, for instance, thrives on a drama created by volatile textural and dynamic contrasts. Strings, mallets, harps and muted trumpets created a canvas of sounds, punctuated all the time by brief and sudden fluctuations of excitement. Solo clarinet and horns introduced more sounds, and all the time we were taken on a journey moving between introspection and extraversion. The second movement was a quite different matter: here the music built from nothing into a massive edifice of sound, from pizzicato cellos to big drum blasts. And the final movement is rhythmic in character, ending in huge dissonant and disjointed blasts of sound from the percussion. The orchestra and conductor excelled in this hugely difficult score, and gave as convincing an interpretation as could be imagined.

After the interval, we heard four of Colin Matthews’ arrangements of Debussy’s Preludes, in tribute to Matthews’ 60th birthday. He’s done an amazing job on these pieces, which were written for the Halle Orchestra in 2001: both the material and textures have been expanded from Debussy’s score, but the overall effect is definitely impressionistic in sound. The Berlin Phil are not on home territory with this music, of course, but Rattle is a French specialist and has coached them to a fine degree of refinement. The fluttering flutes and horncalls of Puck’s Dance, the poignant cor anglais solo in What the West Wind Saw and the eight divided violins of Dead Leaves are just a few examples of instrumental details that showed the orchestra at its best.

Finally, Rattle’s conducting of Mozart’s Symphony No 40, K550, from memory, was the best tribute to the birthday composer I’ve heard since the London Mozart Players’ celebrations in January. He knows this score intimately, and he knows how to communicate what he wants from it to his players.

The first movement was simply stunning. Even the over-familiar opening melody was exquisitely phrased with a finely-tuned shift in dynamics. The oboes were again superb, but the unity of ensemble was the most impressive aspect: the musicians seemed very well prepared. Mozart’s inventive passing of melodies from violas to second violins to first violins in the second movement was here pronounced with ease, and the Minuet was bold and muscular.

By the end of the final movement, which was again wonderfully rigorous, the orchestra was playing with a true sense of joy. So what’s the problem with the Berlin Phil at the moment? Nothing.