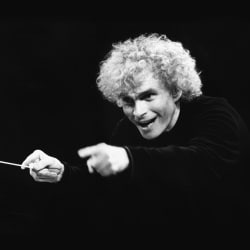 Simon Rattle’s second concert with the Berlin Philharmonic ended with the players shaking hands before they left the stage, as is often the custom in Europe.

This sense of collegiality pervaded the entire performance, which showed a security of technique and refinement of artistry from every player – something that most orchestras can only dream of.

Although this was particularly the case in the Bruckner 7 during the second half of the concert, the players’ sensitive accompaniment of Szymanowski’s First Violin Concerto was no less impressive.

It’s a fascinating work in many ways. Written in 1916, it takes its cue from the textural transparency of the Impressionist movement of the early twentieth century, particularly Debussy. The piece is in one movement and lasts 25 minutes, and although it’s not the traditional showcase concerto of the nineteenth century, Franz Peter Zimmermann captivated the audience with his overwhelming musicianship.

The beginning of the piece exploits effects on oboe, flute and clarinet, with string pizzicati underneath. Zimmermann’s first entrance was stunning, a long, yearning, lyrical line, with a poignant clarinet countermelody. This was all beautiful, and remarkably clear as there is no bass accompaniment to this part. The last two nights have been worth the price of admission for the playing of Principal Oboists Jonathan Kelly and Albrecht Mayer, and the oboe soloist was excellent here, too.

Zimmermann’s double-stopping was done with huge attack, and his racing chromatic scales in the highest register were breathtaking. There was a lovely moment in the central section when the soloist combined elegiacally with the harp and piano, only to be taken over by a tonal bloom of violins and oboes. The solo horn player also contributed greatly to the performance, adding a welcome serenity and lyricism to the sometimes empty textures. In all, it was a wonderful rendition, and Rattle held together both the structure and the local effects with his usual aplomb.

But let’s face it, we were there to hear Bruckner’s Seventh Symphony, and my goodness, it was worth it! The performance was a reminder of how distinctly the German orchestras play the late nineteenth-century Austro-German repertoire. It was all there in the opening seconds of the symphony: the cello theme, played over divided violin tremoli, was doubled by the four horns, and the result was perhaps the most beautiful sound you could hear in any of the world’s concert halls. Far from having lost their grip under Rattle, the Berlin Phil have seized his spirited performance style and now play with joy, fear and excitement.

There were many wonders in the first movment a flute solo of soaring intensity, a sharply-characterised windband section but the ending is what lingers in the memory: a blazing brass fanfare with the most hard-driven violin tremolandi I can remember hearing.

As the programme note rightly states, the second movement is geared around its instrumentation: Wagner tubas, violas and low strings play the dark and brooding opening theme whilst the flutes have a more optimistic melody later on. Again, the horn and oboe stood out as very exceptional soloists in their own right.

For me, the third movement was the single best performance I’ve heard at the Proms this year: an absolutely astounding level of technical proficiency was enhanced by an indelible emotional drive. In the Trio particularly, a rolling string motive was answered by a trumpet motto in a dialogue of the utmost fervour. The descending chromatic scales ripped along with awesome dexterity, whilst the dynamic contrasts were carefully gradated.

And so, to the finale. After the high emotion of the previous movements, the fourth seems rather merry, but Rattle made sure it was no less captivating. Quiet sparky dotted violin notes were the background to yet another magnificent oboe solo, and the horns were again secure and warm in tone. The performance was crowned by a repeated trumpet theme, piercing through the Albert Hall with great force, and the ending was loud and exciting.

Ten seconds of silence were broken by an enthusiastic ‘bravo!’, and many in the audience took to their feet. It was simply tremendous. Frankly, if the German press doesn’t want Simon Rattle for their orchestra, then we’ll be happy to have him back.