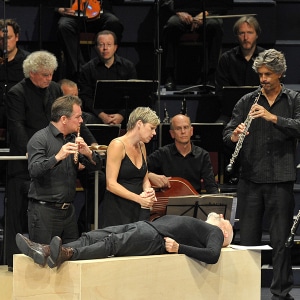 Peter Sellars’ realisation of the St Matthew Passion is rooted in his belief that in this work, “…there are no spectators, only participants. We are all present as witnesses, all called upon to testify.” In a semi-staging first seen in 2010 and which laid them out in the aisles (no room for that at the RAH) by virtue of its raw dramatic power as much as its shocking departure from the usual white-tie and tails presentation, it certainly felt that way, so much so that it would not have seemed outrageous for the audience to have been invited to join in the chorales.

Sir Simon Rattle’s direction of the orchestra – leaping between the sections, coaxing the players into some of the most remarkably virtuosic turns, and when required subsuming himself into the action – was one of the finest things he has done, and it was equalled by Mark Padmore’s tormented, impassioned yet always intimate Evangelist. You might think that just one voice – and not an especially large or powerful one – would not easily hold a capacity audience in a hall this size, so utterly in thrall as Padmore did here, but you’d be wrong. Even when his whole body was contorted with the anguish of the suffering being portrayed, you could hear every syllable, and many of the most direct moments, such as the narrative of Peter’s betrayal and the death of Jesus, were absolutely searing.

Christian Gerhaher’s Christus was, as you’d expect, poetically phrased and sung with immaculate artistry, although one might question his placing behind most of the orchestra for the first part, and high offstage for the second. Eric Owens took on the bass arias assigned to Thomas Quasthoff when the production was new, and if he did not erase memories of the great, now-retired German bass, he nevertheless sang eloquently and touched the heart in crucial phrases such as ‘Durch den ersten Trunk versüsset’ and ‘O schöne Zeit! O Abendstunde!’ He and Padmore, so vividly contrasting both vocally and physically, made for a striking stage pairing.

Magdalena Kožená was almost as affecting in ‘Erbarme dich,’ and her assumption of the Mary Magdalen role mostly worked well, although some might have felt there was too much in the way of action during ‘Buss’ und Reu.’ She and Owens certainly delivered the most assured singing. Topi Lehtipuu’s very individual, plaintive (not ‘plangent,’ please!) tenor showed signs of strain on this occasion, and Camilla Tilling’s soprano seemed less incisive than usual. Both tenor and soprano rose to the occasion in the final, heart-rending recitative.

Mark Padmore believes that the obbligato players are not merely for ornament but must engage with the text in much the same way as the singers, and it’s this engagement which is one of the most striking features of Sellars’ staging – so successful is it, that it’s likely to feel strange to see a more conventional use of instrumentalists. Thus, the oboe is not just an accompaniment to the tenor aria, but is conceived as another voice, and the violin and bass in ‘Gebt mir, meinen Jesum wieder!’ is staged as an impassioned plea from the voice to the instrument. If you’re going to bring players to the fore in this way, it helps to have the best, and here we had Albrecht Mayer, who is considered by many to be the greatest oboist in the world, shaping the lines of ‘Ich will bei meinem Jesu wachen’ with matchless skill, and Daishin Kashimoto delivering a breathtaking, bravura turn as he interacts with the bass.

The Berlin Radio Choir, by turns spectators, Pharisees and rabble, sang the chorales with reverence, especially in ‘Was mein Gott will’ and ‘Bin ich gleich von dir gewichen.’ It might have come as a shock to see them running up into the aisles of the Choir section during ‘Sind Blitze, sind Donner’ but it seemed somehow appropriate. The choristers from Wells and Winchester cathedrals made a strong impact, and of course the Berliner Philharmoniker responded to Rattle’s direction with total commitment. At the close, a long silence was maintained – a tribute to the remarkable power of what we had just experienced.

For further information on all BBC Proms click here.