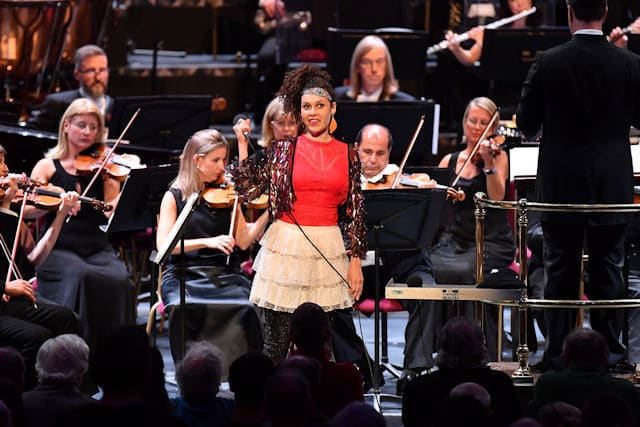 The BBC Symphony Orchestra with Nora Fischer in Louis Andriessen’s ‘The Only One’
(Photo: Chris Christodoulou)

Sunday evening’s Prom was clearly an attempt to follow through the ‘nature’ theme begun with John Luther Adams’ In the Name of the Earth earlier in the day, but most of the connections were pretty tenuous, and the BBC should really just have allowed the disparate collection of pieces to stand for themselves – which, musically, they did.

The BBC SO under its Chief Conductor Sakari Oramo turned in a confidently crisp account of Mussorgsky’s Night on a Bare Mountain (for whose rescue from obscurity we have Rimsky-Korsakov to thank). Oramo ensured pacing and dynamic contrast were to the fore, forcing the odd pause here and there, persuading the horns into the quietest of muted choruses in the slow section, and pulling off an impressive allargando for the rhythmically insistent ‘witches worshipping’ theme. The shepherd-boy clarinet and flute at the close came out of almost nothing, imbuing just the right note of pastoral serenity.

The combination of minimalism and film/television soundtrack tropes ensures an instant appeal for Louis Andriessen’s music, and his BBC-commissioned song cycle The Only One followed true to form. The five songs (interspersed with orchestral interludes) portray the development of a teenaged girl into maturity through her reaction to everyday experiences, and the piece has about it the sound of an art-house film set in small-town America. There’s a retro bluesy quality to it: the second song, ‘The Early Bird’, feels Bernstein-influenced, and when the triple-time lilt (accompanied by electric guitars and a chorus of muted trumpets) of ‘Broken Morning’ breaks into a Latin beat (complete with trumpet and maracas) its jazz roots are laid bare.

Andriessen wrote the piece for the singer Nora Fischer, and his choice here was spot-on. Fischer sings Monteverdi and jazz fusion with equal facility, and for this work she adopted an almost untrained school-musical sound for the early songs that complemented her teenage persona in spangled top and ra-ra skirt. As the character’s life became more challenging, both costume and voice-quality mutated, such that ‘Grown Up’, the angular final song, was delivered in a sober cardigan and a supported, reflective tone betraying just a touch of anxiety.

Paul Klee memorably said that ’drawing is taking a line for a walk’, and Judith Weir’s Forest does much the same thing with the short, simple opening viola and cello theme. The motif repeats recursively, sprouting musical tendrils, and expanding itself through the orchestra to create moments of wonder and great beauty. The piece received from Oramo and the orchestra a consummate understanding of its orchestration, such that the contrasting textures of fierce, busy counterpoint and homophonic grand statements – that shift through the instrumentation – were fully portrayed. The brass was, by turns, sinister and warm, the lushness of the strings carefully controlled, and the bubbling of the marimbas and woodwind approached and receded as the listener’s perspective of the growing forest changed.

Sibelius symphonies are always in safe hands with Oramo, and the performance of the fifth was textbook. Oramo took a measured view of the symphony’s mercurial qualities, using dynamic and texture to maximum effect: the initial woodwind passages sounded almost strident over the severely damped strings; the ‘ticking’ at the end of the first movement was speedy enough to keep the nerves on edge, and, despite the beautiful  wind sound at the opening of the second movement, the hidden unease of the musical material came through in the brittle string melody. The busy, uncomfortable drive of the third movement kept the tension up right to the point of the ‘swan’ theme, which was not allowed to linger. Nordic restiveness at its best.