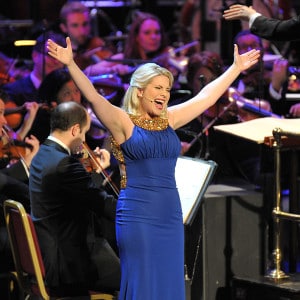 John Wilson and his Orchestra brought music by Leonard Bernstein to the BBC Proms in 2012, with excerpts from On the Town and West Side Story. In this Prom, marking 25 years since Bernstein’s death, it was unsurprising that numbers from those scores also featured prominently, but it was much to Wilson’s credit that some lesser known items made it into the mix.

Immediately evident in this survey of Bernstein’s writing for stage and screen was his great instinct for a good tune, often daringly orchestrated; no wonder some studio executives and early critics thought his music “too avant-garde”. There is no denying that Bernstein, like Bernard Herrmann, Miklós Rózsa, or Franz Waxman, elevated music for screen and stage to high art status, but unlike those others he sought to do so on his own terms, as an expression of the American dream. Indeed, Americana was the leitmotif that ran through the concert.

Was the concert a dream to experience? If one were to believe the level of audience applause then it was undeniably so. However not every item was equally successful: some were marred by occasional lapses in playing quality from the orchestra, where some scrappiness of execution could have benefited from more attentive rehearsal, whilst others suffered in the vocal department at the hands of amplification and balance engineers who needed to finesse their input to ensure complete vocal clarity to suit the Royal Albert Hall’s cavernous acoustic.

The 1944 musical On the Town kicked things off, and New York, New York proved to be an irrepressible winner with confident vocals and a heady exuberance in the orchestral playing. Julian Ovenden was not quite so winning in his portrayal of Gabey in the reflective song Lonely Town; although possessing enough smoothness of character and pathos in his voice, the lyrics took a while to register fully. By the time Louise Dearman delivered a sassy and ever-so-suggestive I can cook, too some technical adjustments had been made to the amplification which benefitted things no end.

1600 Pennsylvania Avenue, a musical written in 1976 to mark the bicentenary of the declaration of US independence, is not perhaps a work that comes readily to mind when thinking of Bernstein’s output, and the first selection John Wilson conducted from it showed just why this might be. The President Jefferson Sunday Luncheon Party March proved tough for the Maida Vale Singers to get their teeth around, and who on earth would want to experience a feast of pickled eels, ragu, spaghetti and ice cream set against the most emphatic of march tempos? I’d certainly forego another helping, but one could sense that Bernstein must have relished the absurdity of it as he put pen to paper. Lucy Schaufer brought real feeling to ‘Take Care of This House,’ arguably the heart of the whole musical, with her direct and touching use of the lyrics.

Scarlett Strallen had the requisite vocal warmth, sparkle and star quality required for A Little Bit in Love, from Wonderful Town, while Louise Dearman found another aspect to Eileen’s character though in A Hundred Ways to Lose a Man: the answer she suggested in any situation is to “throw your knowledge at him” and this advice was met with approving recognition by many women in the audience.

John Wilson and his orchestra came into their own with the lengthy symphonic suite Bernstein drew from his score for On the Waterfront; the performance, ever carefully paced, and exacting in its detailed execution captured the movie’s essence of lone heroism against a violent mass.

By contrast, much of the concert’s second half was of lighter and more crowd-pleasing fare. Candide’s overture ushered in a rather grand rumpus, though there might have been greater finesse amongst the strings at various moments. Lucy Schaufer made a brave attempt through her quasi-operatic delivery and deliberately dodgy accents to be the Old Lady of middle-European extraction who is so easily assimilated. Scarlett Strallen brought stage experience as Cunegonde to her performance of Glitter and Be Gay, for which Bernstein channelled the coloratura of Olympia from Offenbach’s Les contes d’Hoffmann. Given the humour with which it was sung and the quality of orchestral accompaniment in evidence it seems rather churlish to linger on momentary lapses in Strallen’s breathing.

West Side Story proved ever-popular with the coruscating rhythms of the rumble, before Julian Ovenden found just the right tone and approach in his delivery of Maria. Gee, Officer Krupke was at once replete with quick-fire repartee, wordplay and delicious irony as the quartet of Matthew Seadon-Young, Stuart Matthew Price, David Roberts and Jack North delighted in having a social disease.

Two relative rarities followed, first Island Magic from the 1952 one-act opera Trouble in Tahiti, perhaps the work’s only memorable aria. Again, Lucy Schaufer delighted in the characterisation that was afforded her in the description of the “terrible, awful movie” she had just seen. John Wilson’s orchestra caught the stifling exotic balmy atmosphere of the setting superbly. A not too dissimilar languidness was to be had in the song Dream with Me from Peter Pan, written in 1950. Full of simple charm and poise in the experienced hands of Scarlett Strallen, this brief delight left one wondering just why the music remained unperformed until 1975.

The finale of Candide, Make Our Garden Grow, is a gift for orchestra, chorus and ensemble that is guaranteed to prove a crowd-pleaser. The single encore, ‘America’ from West Side Story, was dispatched to equal effect.