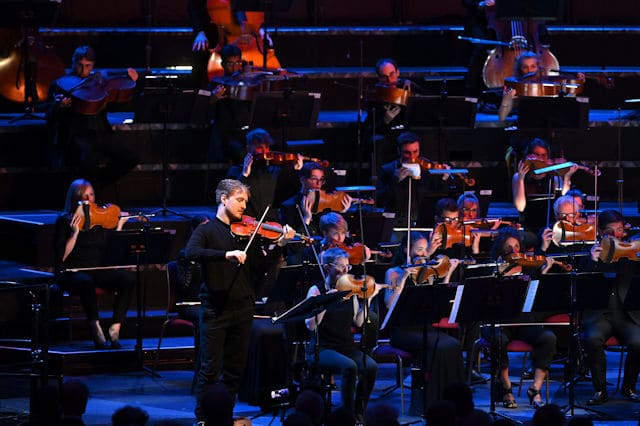 Tuesday evening’s Prom, curated by composer and lead-guitarist of Radiohead, Jonny Greenwood, was a lucky-dip of works whose minimalist inclinations ensured they hung together well.

The violinist Daniel Pioro brought a fluency and clear understanding of period, shape and direction to the Passacaglia from Biber’s C-minor sonata for solo violin, and its segue into the vivace movement of Penderecki’s Sinfonietta was a masterly move, reminding us of the busy, almost Baroque counterpoint of the latter work. The strings of The BBC National Orchestra of Wales under Hugh Brunt gave the piece a thorough workout, contrasting frenetic raspiness with the more mellifluous pianissimo passages of light bowing or pizzicato; the bouncy syncopations and vicious wafts of attack from the ‘cellos and basses that keep the piece moving were also given proper attention.

It’s rare to hear a tanpura (let alone two) played at a Prom, and their gentle twanging drone (underscored by a held note in the low strings) anchored the crystalline drops of the piano notes and the angular solo violin descant of Greenwood’s own third movement of Three Miniatures from ‘Water’ to great effect.

The instruction for Greenwood’s 88 (No. 1) for solo piano is “Like Thelonius Monk copying Glenn Gould playing Bach”, and Katherine Tinker managed to get this spot on. Although she didn’t hum along, she applied a detached quality – so typical of Gould – not only to the early sections of ‘placed’ phrases (many with their Monk-style Scotch snaps attached) but also to the furiously busy contrapuntal passages of overlapping arpeggios and runs; her dexterity with wrists and forearms to play the splashy note clusters of the closing passages was impressive indeed.

Reich’s Pulse contrasts well with his more insistent minimalist works. Its generally treble heavy quality (the only bass instrument is an electric bass whose gentle ostinato prevents the piano, strings and woodwinds from floating away altogether) imbues the listener with a feeling of contentment, and its arpeggio laden minimalism (with echoes of Copland’s Appalachian Spring) brings to mind a bright countryside vista full of possibilities. Once again, the performance was excellent, all of the players delineating well Reich’s clever transition from the busy, airy tangle of instrumental voices at the opening to the increasing arrival of homophony and the quiet alignment of musical ‘views’ into measured concord.

Greenwood’s Horror vacui, a work for violin and 68 strings, received its première with Pioro and the BBC Proms Youth Ensemble. It’s a piece that aims to reproduce, in seven movements and with traditional instruments, the different reverb/echo effects available to electronic instruments. The performance was full of fascinating sonic effects: an initial pianissimo multi-note susurration  suggesting a distant echo of all the music played so far; an overlapping repetition of a note bending phrase begun in the basses that moved upwards through the strings like the spreading of a blot of ink on wet paper – there was stamping, string slapping and the sound of players blowing into their F-holes. The solo violin part (played by Pioro with supreme poise and confidence), as with any concerto, both led and became part of the texture, and included a couple of sharp-cornered, almost serial cadenzas. Apart from one obvious close to a movement (that confused the audience into clapping) the concerto is seamless, and the listener needed the skills of an acoustic technician to appreciate the difference between each technique being presented. Without this specialist skill, one had to take the concerto at face value, and its episodic nature made appreciation of development or direction difficult; at first hearing, it felt a little like a slightly narcissistic set of experimental variations rather than a through-composed work.