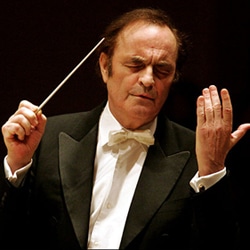 As the 2011 Proms entered its final week the Royal Albert Hall welcomed back the Philadelphia Orchestra after a five year absence. It saw them put their recent financial troubles to one side to give one of the stand-out performances of the season to date.

Sibelius’ Finlandia, immediately showed them on strong form. The darkened, overcast moods of the opening were immaculately preserved, with the imposing, overarching brass seeming to be imbued with additional solemnity tonight. The early, slow-sliding strings sounded particularly opulent, and the orchestra really succeeded in charting the transition from dark to light. By the time of the rousing ending the sound of struggle had been replaced by that of victory. Given its status and popularity, it now seems astonishing that it wasn’t performed at the Proms for over 35 years (from 1959 to 1995).

Next, Janine Jansen joined the orchestra for Tchaikovsky’s Violin Concerto in D major. She offered some expressive, vivid playing, full of melodic allusions that were to scale some vertiginous heights, in particular during the beautiful Canzonetta. The orchestra succeeded in bringing out the optimism inherent in the piece, playing with restraint to begin with before allowing it to blossom in florid style. Initially the concerto may have seemed somewhat lightweight when programmed alongside three arguably harder-hitting, heavier pieces, but the combination of Jansen and the Philadelphia Orchestra ensured it more than withstood the challenge.

Rachmaninov’s Symphonic Dances opened the second half, with the orchestra’s long-standing links to his valedictory swansong still very much in evidence. It further demonstrated their rich, full-bodied orchestral sound. The sonorous brass effusions and striking percussive outbursts were expertly discharged, while the lustrous strings soared throughout. The piece showed the Philadelphia Orchestra as a particularly fleet-footed force, able to move through musical gears in effortless style.An accumulation of orchestral surges closed the third dance, resulting in an explosive finale. The piece is emblematic of Rachmaninov’s rich musical language and tonight was communicated impressively by both orchestra and conductor.

The concert had opened with Sibelius’ condensed artistic declaration and was to close with Ravel’s La Valse, his own similarly compact musical statement. It was delivered with considerable flair, from the magical, slow-revelation of the beginning, through the cubistic rearrangements of the mid-section to the euphoric, climactic finish. It had been a performance defined by clarity, precision and potency and when they returned to play an encore of the Hungarian March from Berlioz’s Damnation Of Faust, it put the seal on a truly impressive evening.