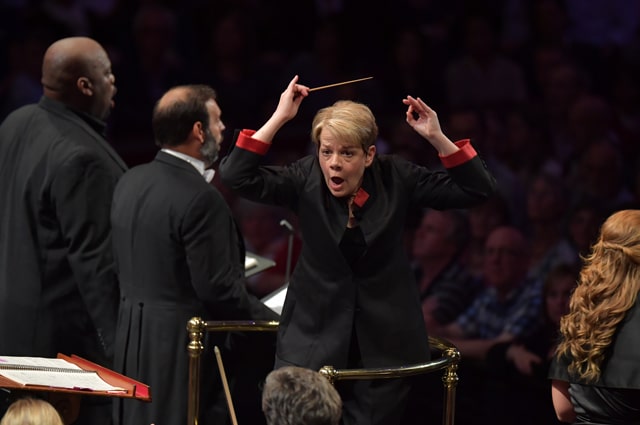 It is a rare event for the choir to be louder than the orchestra in the climactic moments towards the end of the Libera me in Verdi’s Requiem, but on Friday night the BBC Proms Youth Choir managed it. Granted, the Orchestra of the Age of Enlightenment were playing on period instruments, and the choir numbered over 250 singers (around twice the number present at the piece’s 1874 première), but it was a thrilling role-reversal nonetheless; what is usually a last supplication, almost-screamed against the overwhelming forces of perdition, became a hair-raising moment of the triumph of the human soul that augmented an already first-rate performance.

The conductor, Marin Alsop, is now a regular Proms favourite, and, as always, she executed a performance that was classic yet distinctly her own, and her understanding of the nuances of volume and tempo that the work requires were spot-on. The thrilling swells in the Dies irae were just as dramatic as they needed to be, and the slight lingerings on the little woodwind ostinati at the opening of the Recordare were delightful – indeed, the whole of the following soprano/mezzo duet was one long magnificently milked play to the gallery. The rubato pull-ups in the Lacrymosa were particularly enjoyable, and the Sanctus fugue was as light as a soufflé, and perfectly controlled, in spite of its frighteningly brisk tempo.

The choir, as remarked above, turned in a splendid performance, and it was difficult to believe, hearing the well-schooled pronunciation, that the singers were not Italian; every consonant (including the usual stray sibilants) was perfectly placed; they were resplendently loud in the Rex tremendae, Sanctus and repeated Dies iraes, and yet delivered the quietest pianissimo possible at the opening Requiem (which they sang, along with its counterpart in the Libera me, without music).

The orchestra also put in some fine work (although there was a slight problem with intonation in the violins during Sed signifier sanctus Michael), and the use of a stereophonic pair of bass drums – providing a kind of double-tap effect – in the Dies irae sections was inspired.

Although the orchestra opted to eschew the use of Verdi’s specially designed gran cassa (the massive bass drum that is usually the hallmark of a Verdi Requiem), its loss was more than adequately compensated for by the American bass, Morris Robinson, who stole the show with his sublime  voice. It is at the same time round and sonorous and golden, yet very focused, and from his opening solo line on Mors stupebit – delivered with sinister drama – the audience was aware that this was the man of the match. Anyone planning to re-visit the performance on iPlayer, should definitely pay attention to Robinson’s fantastic variety of expression in Lux aeterna, which ranges from a dark Wagner-esque tone in his statement of ‘Requiem aeternam’ to the honeyed flute-accompanied rendering of ‘cum sanctis tuis’.

The soprano Tamara Wilson also gave a brilliant performance in the final Libra me, her powerfully sweet tones perfect for the floated top B-flat as well as the over-full-chorus top Cs. The mezzo Alisa Kolosova and the tenor Dimitri Pitta also delivered good accounts, although, both of their top registers in their solo passages felt strained and less smooth (and the ‘tread’ of the tenor statuens’ passage was somehow less impressive than it can be); their blending in the duet, trio and quartet sections was, however, excellent.

However much of a party the Last Night turns out to be, this performance was a fitting final full concert of the season.