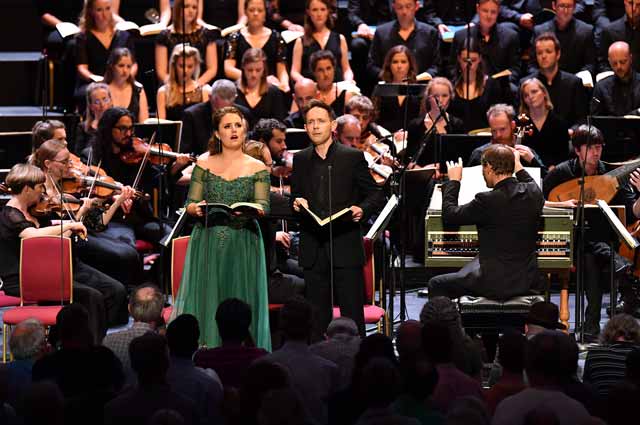 Theodora is unusual among Handel’s compositions in that it has created more of a splash in the modern day than it ever did when it premiered in 1749. The reason it was so coldly received initially is that it had no happy ending and actually saw the Christian characters suffer and die. This was unappealing, if not outright distasteful, to eighteenth century British audiences, especially since Handel’s oratorios did tend to follow the conventions of the day. For example, Jephtha, written two years later, actually altered the Old Testament story to see an angel grant a reprieve at the eleventh hour so that the Israelite leader did not have to kill his own daughter.

Ironically, in an age when the level of religious observance across society as a whole has declined, the story feels more inviting because the values associated with remaining true to oneself hold much appeal. Nevertheless, the reasons for its popularity today may be far simpler. As soon as any outright objections to the subject matter have disappeared, it is easy for the brilliance of the music to shine through because it is so exceptionally fine.

Although Theodora is an oratorio that lends itself quite readily to being staged, this performance from Arcangelo, directed from one of the two harpsichords by Jonathan Cohen, presented the work in its original and simplest form. The soloists were obviously expressive and adopted a variety of positions at the front of the stage to aid, for example, connection during the duets. There was the odd alteration to the stage instructions, which helped to bring another dimension to the performance without seriously undermining the importance of the original ones. For example, after Didymus’ air ‘Kind Heav’n, if virtue be thy care’ in the penultimate scene of Part I, the libretto reads ‘Exit Didymus’. However, Iestyn Davies remained at the front of the stage to witness Irene’s recitative in the following scene and to gaze on the chorus as they began ‘Go, gen’rous, pious youth’ because they were singing about, and metaphorically addressing, him.

Davies was on wondrous form, displaying immense sensitivity and purity in his soaring lines, while also projecting well and conveying something of Didymus’ strength and resolve. Louise Alder was equally engaging as Theodora, revealing excellent enunciation and using her beautiful and flexible tone to produce a strong and assertive sound in places and a dreamy air in parts of ‘With darkness deep, as is my woe’. Ann Hallenberg was extremely persuasive as Irene, with her mezzo-soprano being capable of producing great vibrato, yet so often feeling quite understated. Benjamin Hulett revealed an extremely clean yet warm sound as Septimius, while Tareq Nazmi brought his secure and intriguing bass to the fore as Valens.

In a notably textured, nuanced and insightful performance, the orchestra revealed strong rhythmic precision so that it could convey a certain sense of urgency (without ever rushing) while still providing an immensely sensitive sound. The chorus was well balanced with the blending and layering of lines proving particularly skilful. The singers’ sound, if anything, felt fuller when they were portraying the Christians, which made sense. It seemed as if the Heathens may have been in a strong position, and indeed celebrating, but that only a total belief in virtue and truth could ever inspire such depth of expression. Indeed, when the Heathens sang in Scene 5 of Part III their sound carried a sense of the Christians’ own about it, as they were themselves overwhelmed by the feeling of victory that the faithful saw in death.