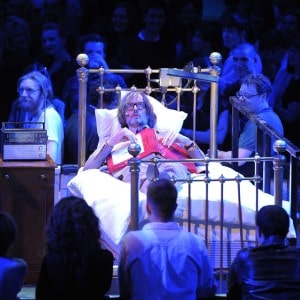 Beginning this live version of Jarvis Cocker’s Radio 4 series Wireless Nights, our spirit guide rises from the depths in a Bedknobs and Broomsticks bed, clutching an oversized copy of Jung’s The Red Book. This flashy moment delights the crowd, yet suggests a showmanship that is only intermittently followed up. “You wake up and you’re surrounded by loads of people expecting you to entertain them,” remarks Cocker on waking, underlining the main reason why the 30- and 40-something crowd have turned up for this Thursday late night prom, risking night buses home and crankiness the following day through lack of sleep.

The nautically-themed programme is largely designed to illustrate three personal testimonies of undersea night journeys: a champion freediver, a giant squid-hunter and, most dramatically, two telecommunications engineers trapped at the bottom of the ocean in a tiny sub for three days and nights. These stories are interlaced in a way that allows a narrative arc from safety to danger, disorientation, soul-searching and back to safety again. Musically, this is mirrored by a journey from the ‘oral comfort blanket’ of the shipping forecast theme Sailing By, the overture from Wagner’s The Flying Dutchman, plenty of Debussy, and a culminating sweet rendition of The Beatles’ Good Night.

Interrupting the orchestral pieces are star numbers for Cocker himself to perform. His breathy whispers suit the opening gambit of Echo & The Bunnymen’s Ocean Rain well, but sadly wither on the vine during an ill-advised attempt at Tim Buckley’s Song To The Siren, a singer’s song if ever there was one. Yet another musical presence is the electronic soundscapes used to provide a sonic bed for the stories. These are embellished at one point when the percussion section joins in, an inventive strategy that would have benefitted from being exploited more tonight. The 32-piece choir assembled largely for Debussy’s Sirènes (the majestic centrepiece of the programme) is also rather under-used, resurfacing only to add sheen to a couple of the pop numbers.

Tonally, the programme is subject to shifts between the sublime, the infantilized and the ironic. Alongside Debussy we get John Williams’ Jaws theme, a snatch from South Pacific, Saint Saens’ Aquarium and Cocker’s own delightful loungey swish through Aqua Marina, illustrating a childhood infatuation with the Stingray character. This keeps the programme varied, yet constantly threatens to violate any true sense of the immersion (both musical and psychological) that is the stated aim of the night. As a remediation of the intimacy of late night radio, the atmosphere is most penetrating when the Finding Nemo-esque projections are dimmed, Cocker and the BBC Philharmonic disappear and the audience can collectively focus on the most affecting part of the evening: the stories themselves and the voices of their narrators.

However, this rather begs the question of why we have coalesced at the Albert Hall for a shared, collective experience. The answer to this, of course, is Cocker himself and the warm cult of personality that has formed both around his post-Pulp broadcasting career and that invitingly familiar voice. As an occasion, however, the evening never quite manages to rise to be more than the sum of its parts, and a slight sense of watery disappointment can be felt as the audience seeps back out into the inky night at its close.