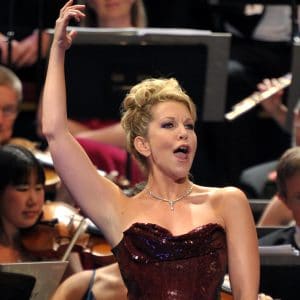 The Last Night of the Proms is a heady mix of tradition, innovation, starry soloists, popular bon-bons and obscure curios, serious music-making and fun.  This year, the evening’s programme had a foot firmly planted on each side of the Atlantic, whilst taking time to make judicious nods to other European countries’ cultural contributions and the acknowledgement of anniversaries for Wagner, Verdi, Britten and George Lloyd.

In a programme over-stuffed with overtures and anthems of one kind or another, one might have taken routine music making as the default position, yet Marin Alsop was having none of it. From first to last, her direction was purposeful, attentive, caring and, above all, replete with musical finesse.

Anna Clyne, London born and US resident, exemplifies the transatlantic special relationship of the evening: her commissioned concert opener Masquerade was effective, being initially acerbic in the brass, swirling in the strings and quirky with its use of percussion. Germany’s principal representation came in the form of Wagner’s Die Meistersinger overture, in which the majestic sweep of the principal lines found warmth and cohesion in the BBC Symphony Orchestra’s string and brass sections.

By contrast, the third overture of the first half, Britten’s The Building of the House, was a somewhat terse and pungent affair. It benefited though from the solid contribution of the BBC Symphony Chorus. Their contribution also proved both uplifting and valedictory in a beautifully controlled performance of Bernstein’s Chichester Psalms, in which Iestyn Davies was a most sensitive and affecting soloist.

Restraint might not be the word that comes most readily to mind when considering Nigel Kennedy, but he effortlessly held the rapt attention of the capacity audience with his tastefully shaded solo line in Vaughan Williams’ The Lark Ascending, and was fully deserving of the enthusiastic applause he received. Joyce DiDonato brought vocal brio to Massenet’s Cherubin, sustained and elegant simplicity of tonal projection to Handel’s Xerxes, and knowing control of her vocal fireworks in Rossini’s La donna del lago.

Marin Alsop did her mentor Leonard Bernstein a further favour in the second half with the overture from Candide, followed by a refulgent account of Make Our Garden Grow from the BBC Symphony Chorus. Their account of Verdi’s ‘Va, pensiero’ from Nabucco – to this day the unofficial Italian national anthem – was tasteful rather than truly heartfelt. Joyce DiDonato sprinkled stardust over Harold Arlen’s Over the Rainbow, which she dedicated as an “anthem” to the gay community worldwide. Later, she brought some feeling to Richard Rodgers’ ‘You’ll never walk alone’ – no doubt keeping some football fans happy in the process – and the traditional ‘Londonderry Air’. In both she was joined by the massed audience to raise the roof for the first, but not the last time.

Nigel Kennedy returned to make his own inimitable contribution to the silver screen derived theme, with an arrangement of Vittorio Monti’s Csárdás. His loves of improvisation, jazz and world routes came to the fore alongside cheeky inclusions of Beethoven et al in this willful jamming session that found Alsop and the BBC Symphony Orchestra doing their best to follow his infectious associations. By this stage balloons were bobbing around the arena gleefully, party poppers going off at will and flags were waived joyously, drowning out the occasional curmudgeonly voice within earshot.

The season’s maritime theme was represented by Bantock’s well crafted and colourful curiosity The Sea Reivers, deftly dispatched, and George Lloyd’s HMS ‘Trinidad’ march, which bristled with a sea-salty tang, hornpipes, whistles and all. These replacements for Wood’s traditional sea shanties on the time-honoured programme were merely the final preludes to the true start of the end of term party. Arne’s Rule Britannia was given large by all, DiDonato included, who was by now thoroughly in the crowd-pleasing party mood.

Alsop lost no time in thanking the audience for their contribution to Land of Hope and Glory – “sung like natives, but in a good way”, she claimed with a twinkle in her eye. In her speech, Marin Alsop rightly took care to mention the transforming power of music and urged other women follow the path to the podium, or wherever else their dreams may take them. Such heartfelt sentiments were easily transferred into music, first in Elgar’s exuberant orchestration of Parry’s Jerusalem and, finally, in Britten’s refined arrangement of the National Anthem. When all’s said and done, history has already written the date down as the first occasion a woman conducted the Last Night of the Proms, but those who were there will remember it as an enjoyable concert of fine music-making that did credit to all who took part. No doubt Richard Strauss’ 150th anniversary will be a mainstay of next season. Bring it on!