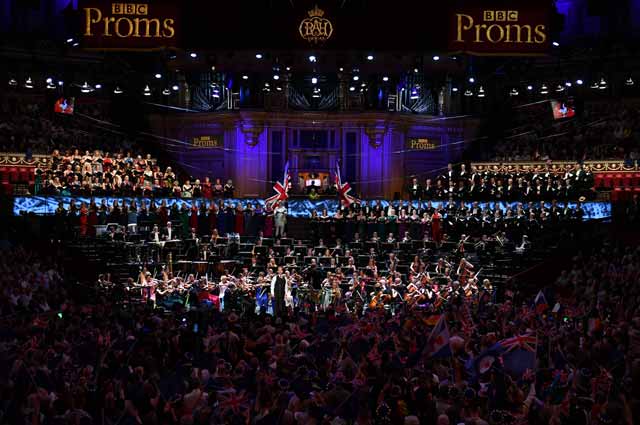 There is no such thing as a bad Last Night of the Proms as all elicit enjoyment, but some undoubtedly hit the mark more than others. In this respect, the finale to the 2018 season was one of the great successes, as it had a degree more gravitas than many, while also seeing the fun and laughter rise to levels that are not always achieved.

The factor that was most responsible for the evening really feeling as if it had meaning was the programming. Even the small Proms booklet, produced shortly before the season begins and thus including any programme alterations that have been made up until then, did not list several items that finally appeared at the Last Night. It seems that the evening’s conductor, Sir Andrew Davis, had a fair say over the final selection and, if so, his contribution was invaluable as the first half included much music from British composers, but also some relative obscurities that brought real depth to the evening. There was, for example, Hindemith’s Overture to Neues vom Tage, which opened the concert with its syncopated rhythms and beautiful bassoon melody, and an extraordinary performance of Berlioz’ Lélio – Fantasy on Shakespeare’s ‘The Tempest’ that brought out the full range of moods and colours in the piece. The BBC’s new commission for the evening was Roxanna Panufnik’s Songs of Darkness, Dreams of Light, which commemorated the end of the First World War by interspersing Isaac Rosenberg’s ‘In the Underworld’ (1914) with lines from Kahlil Gibran’s The Prophet (1923). It involved both the BBC Singers and BBC Symphony Chorus, who initially sang separately before merging into a ‘conversation’.

Both choirs were on excellent form with the BBC Singers delivering an exquisite a cappella performance of Stanford’s The Blue Bird. British music was also represented by Parry’s Blest Pair of Sirens and Stanford’s Songs of the Sea, in which the evening’s soloist Gerald Finley sang. The five songs provided a pleasing symmetry with the Fantasia on British Sea-Songs in the second half by also describing an entire voyage, with the second of them being ‘Outward Bound’, the fourth ‘Homeward Bound’ and the third ‘Devon, O Devon, in Wind and Rain’ representing the same low point as ‘Tom Bowling’. 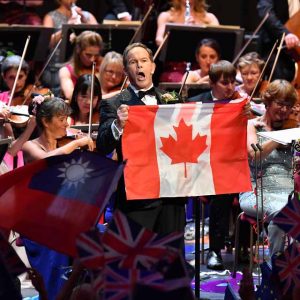 The second half included performances of the ‘Marche militaire française’ from Saint-Saëns’ Suite algérienne, a brilliant rendering of Milhaud’s Scaramouche by saxophonist, and 2016 Young Musician of the Year finalist, Jess Gillam, and a poignant performance of the ‘Soliloquy’ from Rodgers and Hammerstein’s Carousel. In the latter, Finley, with waistcoat and rolled up sleeves to suit the character of Billy Bigelow, gave an immensely smooth and heartfelt performance, although relative to the strength of rest of it, the very climax felt just a little uncomfortable.

Davis, a former Chief Conductor of the BBC Symphony Orchestra, had previously conducted eleven Last Nights (more than anyone other than Henry Wood and Malcolm Sargent), but this was his first since leaving the post in 2000. He was always peerless at carrying off the occasion by interacting with the various Promenaders’ heckles, and clearly relished being back and seeing ‘old friends’ again. For example, after the audience clapping in the ‘Hornpipe: Jack’s the Lad’ he quipped that ‘you were slightly more rhythmical than you were twelve years ago’ (before correcting it to eighteen). In response, however, the crowd was even more energetic than usual and gave it their all. In fact, after the participatory ‘Land of Hope of Glory’ section of Elgar’s Pomp and Circumstance March No. 1 Davis said ‘Usually at this point I would insult you and say you didn’t sing very well, but that’s so patently nonsense because you sang magnificently’. This prompted one Promenader to shout ‘It’s taken us eighteen years’ to roars of laughter!

Although Davis did mention the importance of music in society, his speech was more focused on his personal memories and relationship with the Proms. The hall did sport many EU flags, with the protest at this music event being against the threat that Brexit poses to musicians by potentially shutting off the right to Freedom of Movement. Many in the arena also sported blue berets with yellow stars, which prompted several Promenaders, recalling Frank Spencer in Some Mothers Do ’Ave ’Em, to cry ‘EU, Betty’!

At the end of a season that commemorated the centenary of the end of the First World War, Anne Dudley had arranged a medley of favourite wartime songs – ‘Roses of Picardy’, ‘It’s a Long, Long Way to Tipperary’, ‘The End of the Road’ and ‘Keep the Home Fires Burning’ – which involved Finley, Gillam, the BBC Symphony Chorus and Singers and the entire audience. Perhaps the greatest illustration of the Last Night’s outward looking nature, however, came when Finley sang ‘Rule, Britannia!’. He appeared in a dinner jacket, which initially seemed rather prosaic compared with those costumes that have graced the stage for this segment over the years. He then, however, opened it up to reveal what seemed to be a Flag of Saint George cummerbund. On unrolling this, however, it became a Union Flag, but there was a further twist when he turned it around to reveal his own Canadian Maple Leaf.

The Last Night of the Proms was broadcast live on BBC 2 (part 1) and BBC 1 (part 2) and will be available on BBC iPlayer for thirty days.