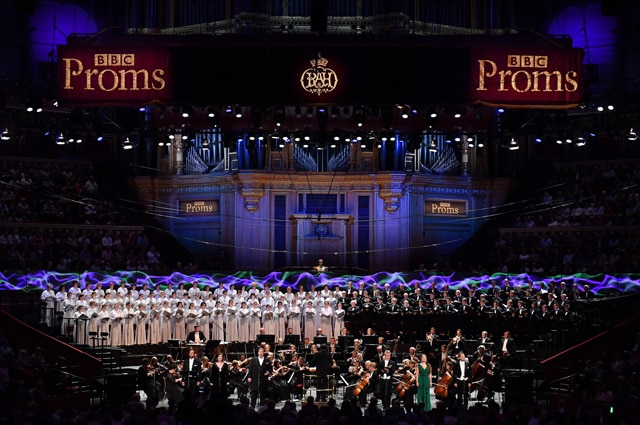 Shaw’s declaration that Fidelio is “…grimly irreconcilable with the glitter of the fashionable opera house” would suggest that a concert performance is the ideal format for its presentation of idealistic love and the triumph of the decent over the tyrannical, and in many ways this Prom proved such a view to be valid. Spared idiocies such as the prisoners sauntering about in immaculate romper suits or Leonore and Florestan singing about being in each other’s arms whilst standing at a distance more apt for a duel than a duet, we were free to concentrate with exceptional focus on the confused emotions and searing passions of Beethoven’s wondrous music.

The fourth (‘Fidelio’) overture was played with some verve by the BBC Philharmonic Orchestra under Juanjo Mena, although one feared for how the horn section might fare later on – happily it recovered to provide eloquent support during ‘Komm, Hoffnung.’ Louise Alder and Benjamin Hulett, both well known to Garsington and Glyndebourne audiences, were perfect casting as Marzelline and Jaquino, with bright, youthful voices to match their stage presences. Kirsten Flagstad remarked of Elizabeth Schwarzkopf’s  ‘Mir ist so wunderbar’ that she had never heard a lovelier sound come from a human throat, and it’s not too far-fetched to imagine that she might have felt the same way about  Louise Alder’s launching of the great Act I Quartet on this occasion. 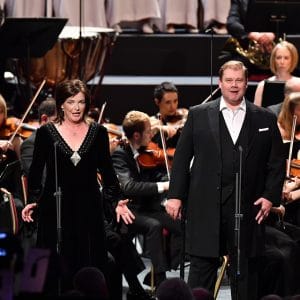 The other stars of the evening were Stuart Skelton and the Orfeón Donostiarra. Skelton’s Florestan is not for those who must have a can belto tenor in this role, and his dramatic style, even in a concert setting, is as far from park n’ bark as you can get; he offers subtle singing, the nuance of his phrases finely shaped and the more passionate outbursts given with great feeling yet absent of undue histrionics. As with all truly great singers, he does not reserve his best only for the showpiece aria (although his ‘Gott, Welch Dunkel hier!’ could probably have set even the highest pillars of the hall trembling) and it was ‘Euch werde Lohn in bessern Welten’ which brought tears to the eyes.

Ricarda Merbeth has an impressive list of roles in some of the great houses, but her fairly soft-grained soprano was not ideal for this cavernous space. Nevertheless she presented a sympathetic Leonore and managed to equal her Florestan in the duet – no mean feat. She also gave the fullest weight to that most touching of phrases “Ja, sie dringt in die Tiefe des Herzens.’

James Creswell was standing in for Brindley Sherratt as Rocco, so his performance was necessarily given with a score but he still delivered a forthright, lovable characterization. Detlef Roth blustered as Pizarro, but it was difficult to share in the audience’s obvious approval of his credentials as a villain. David Soar was a noble, dignified Don Fernando, singing with elegant tone and giving just the right emphasis to “…euch, edle Frau, allein…” – those vital phrases which sum up part of the narrative of Fidelio.