Barry Creasy continues our coverage of the live BBC Proms. 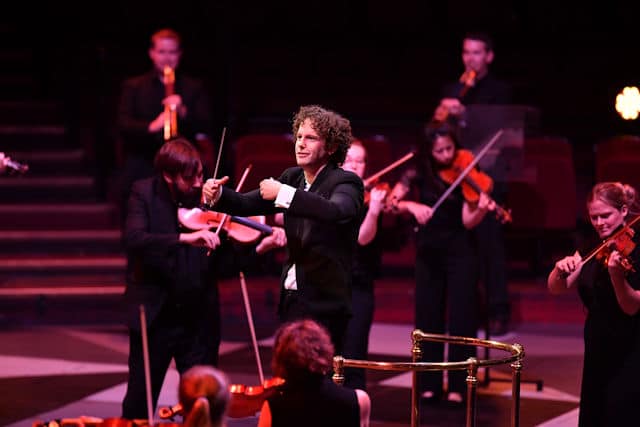 Beethoven’s increasing deafness is, along with his irascible character, one of those Ladybird-book facts that everyone knows, and reminding audiences of this disability through a piece of music presents a challenge to any composer. Richard Ayres (each of whose works simply bears a number) is himself losing his hearing, and rose to this challenge in a very personal way with No. 52, given its world première at Thursday evening’s Prom by Aurora Orchestra under Nicholas Collon. Taking its inspiration from Beethoven’s Heiligenstadt Testament, No. 52 is a beautiful but emotionally draining work in three movements (‘Saying goodbye’, ‘Dreaming’ and ‘Hearing loss’).

Gentle, tonal string passages (perhaps referencing the ‘Heiliger Dankgesang’ of the Op. 132 string quartet) open the first movement, but a discordant, tinny underlay suggestive of tinnitus gradually becomes apparent. The jolly piano introduction of ‘Dreaming’ with its almost-jazz riffs becomes a series of rhythmic staccato notes and chords from both piano and orchestra; the piano tone changes to a ‘plinkier’ sound, and synthesised heavy breathing, retching and screaming sounds are added to the mix, which, by now has become a chaotic orchestral canter. The thunder continues in the third movement, along with a Beethovian march, a carnival waltz, a brief ‘Dies Irae’ quote, a deal of Wagnerian brass and some busy woodwind. All of this is interspersed with passages of music from an increasingly scratched and fuzzy recording on an old horn gramophone on whose final crackles the piece closes.

Aurora and Collon gave the piece a brilliant – albeit harrowing – first outing that was full of disturbing orchestral colour, smartly rendered dynamics and rhythmic variety.

An exploration of rhythm is also the great driver of Beethoven’s 7th symphony, and the second half of the Prom was an account of this seminal work performed entirely from memory. All performers instinctively know that ‘getting out of the score’ improves communication, and here was a masterly demonstration of this. Most of the performers stood, and from their movements as they performed, it was clear that every player absolutely inhabited the music, pushed into physical gesture by its unflagging brilliance.

“All performers instinctively know that ‘getting out of the score’ improves communication, and here was a masterly demonstration of this”

Nowhere was this more evident than in the third movement scherzo, which, despite its more than sprightly pace and Collon’s taking wall-of-death cornering with the dynamic changes, was absolutely together on every phrase. Neither were Beethoven’s shifts in timbre ignored, and the different textures – from woodwind flutters through gusts of brass to sudden volleys from hard-stick timpani – rattled around the orchestra.

This gestalt playing was also evident all through the symphony: the opening movement saw some elegant contrasting of light and shade between the poco sostenuto and vivace sections that brought a ‘living in the moment’ quality equally to the rumbustious big tunes and the delicate woodwind interplay. The gradual ebb and flow of the second movement’s musical material through the insistent throbbing pulse was masterfully handled, and the moments of astonishing quietness were deftly contrasted with solid but controlled statements from winds and timps. The last movement’s shotgun start marked the beginning of an almost unflagging gallop to the finish line, driven by the inexorable dotted ‘ten to ten’ rhythm, the final furlongs of which were a textbook exercise in organised chaos. This is how to celebrate Beethoven’s 250th anniversary!

The concert is available on BBC iPlayer for the next 11 months.