The 2020 BBC Proms is over. It was a Prom season like no other. Sam Smith saw it out. 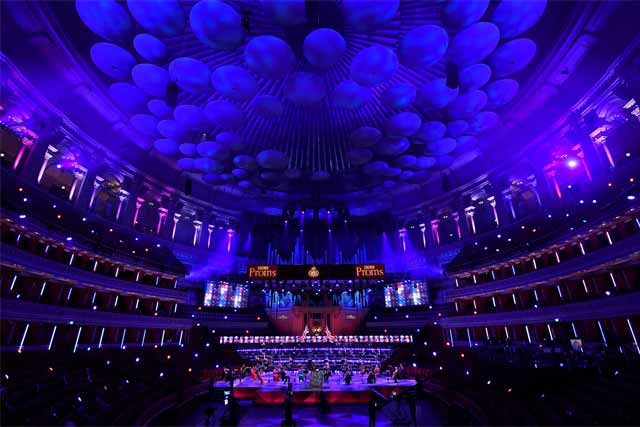 One has to pity anyone charged with putting together this year’s Last Night of the Proms. When the whole event is intended to be an ‘end of term party’ in which audience participation is key to the experience, how could anyone hope to generate the requisite atmosphere with no spectators in the hall? Any planner would have been torn between trying to make the event as similar to normal as possible, and considering the best ways in which to provide an appropriate parallel to the ‘original’, given the impossibility of actually re-creating it. Questions were also raised in advance over whether it was desirable for ‘Rule, Britannia!’ and ‘Land of Hope and Glory’ to be sung or even included, but in the event the evening proved to be extremely well pitched given the circumstances.

Many will have felt that this Last Night simply wasn’t the same, but nothing has been this year with the Covid-19 outbreak, and the organisers could only work with the hand they had been dealt. There were certainly some differences, however, that any seasoned Promenader could not have failed to notice. In the empty Albert Hall, with a pared down BBC Symphony Orchestra socially distanced on a built out stage, the bust of Sir Henry Wood wore his traditional Last Night chaplet but no Promenaders ritually placed it on his shoulders. The conductor’s podium was hung with streamers and ‘L’ plates, but usually Promenaders place these on it at the interval. Here, they graced it from the start while what had actually been hung seemed far less imaginative than usual.

At around one hundred minutes the concert was substantially shorter than other Last Nights, and, given that it was designed solely for viewers at home, it was understandable that there was no interval. Nevertheless, on paper at least, the programme seemed rather lightweight. The first half will usually include a few relatively substantial pieces, such as Berlioz’ Lélio – Fantasy on Shakespeare’s ‘The Tempest’, which appeared in 2018. Here, the programme read very much like the traditional Last Night festivities with a few ‘easy’ pieces tagged on the front end.

That was not, however, the impression anyone was left with once the evening got underway by virtue of the sheer quality of the playing of the BBC Symphony Orchestra, under the baton of Dalia Stasevska. The programme began with a nicely judged performance of the Overture to Le nozze di Figaro, before the evening’s soprano soloist Golda Schultz took to the stage for the first time to sing Susanna’s ‘Deh vieni, non tardar’. Schultz was a revelation, gliding through the aria’s lines in such a beautiful manner that we rarely stopped to think just how precise her phrasing was. She then repeated the magic in the 1897 orchestrated version of R. Strauss’ ‘Morgen!’ with Igor Yuzefovich’s opening violin solo also proving spellbinding.

The Last Night always includes a new commission, and this year’s could not have been more topical as Andrea Tarrodi’s Solus reflected on the current Covid-19 pandemic. It proved a very evocative piece, with a small ‘virus’ beginning quietly in the bass instruments and working its way increasingly loudly into the whole orchestra, before a note of optimism for the future was sounded as the music seemed to open out into wild nature. It is Stephen Sondheim’s ninetieth birthday this year and, given what a highly memorable Prom was held for his eightieth in 2010, one can only speculate what might have been on this year’s programme in more normal times. As it was, we were treated here to ‘Night Waltz’ and ‘The Glamorous Life’, in another exemplary performance from Schultz, from A Little Night Music. 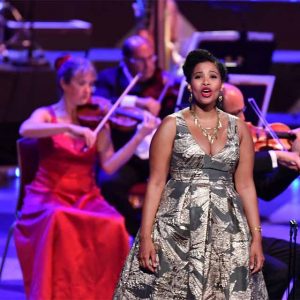 The evening continued with Sibelius’ Impromptu for strings, which had actually started life as a piano piece. This possibly represented the point at which the evening diverged most from the average Last Night, for it is about as far removed from Fučík’s Entry of the Gladiators as can be. This said, the occasion has always included more meditative pieces and it is only three years since the choral version of Finlandia appeared at it. In the event, it proved to be such a beautiful piece, aided by the orchestra capturing such a wonderful sense of flow in its playing, that it is hard to believe it has never appeared before at the Proms!

“…how could anyone hope to generate the requisite atmosphere with no spectators in the hall?”

Nicola Benedetti then stepped up to play Vaughan Williams’ The Lark Ascending. She was replacing a previously advertised Lisa Batiashvili, but knows the work extremely well, having even performed it at the Proms in 2010 (and appeared at the Last Night in 2012). As she played, images of all four countries of the United Kingdom were shown, which made the piece feel particularly evocative, although her playing was more than enough to ensure that it did anyway.

There followed a new arrangement of Jerusalem, subtitled Our clouded hills and dedicated to the Windrush generation, in which composer Errollyn Wallen added a blues feeling and African rhythms to Parry’s celebrated tune. It proved an immensely accomplished piece, sung impeccably once more by Schultz, and provided an excellent contrast to the original version that was performed towards the end of the evening by the BBC Singers and organist Richard Pearce.

Whether it was the angles that were employed as the camera swept across the entire venue, or the skilful use of lighting, the Albert Hall did not feel as empty as it has done for many of the other televised Proms this season. The atmosphere was also aided by cameras revealing a socially distanced group of Chelsea Pensioners and others watching the Last Night in the grounds of the Royal Hospital Chelsea, with their applause being piped into the hall after each piece. There were also shots of Proms fans at home, and a link up between presenter Katie Derham in the hall and the homes of Mel Giedroyc, David James, Lesley Garrett and Jacob and Suzie Collier. None of this was ever going to capture the atmosphere of a normal Last Night, but it helped create a sense of occasion without looking as if everyone was trying too hard.

The traditional Last Night festivities will never be the same without the participatory element, but there was extremely fine compensation in the form of outstanding playing by the BBC Symphony Orchestra, and brilliant singing from the BBC Singers in ‘Rule, Britannia!’ and ‘Land of Hope and Glory’. With no audience there to sing along, the performers really took the opportunity to ensure these pieces were heard at their very best from a more technical viewpoint. It was good that, in absence of the various Proms in the Park events, all four nations of the United Kingdom were involved in the Fantasia on British Sea-Songs via link-ups to various performers, with the playing of piper Ali Levack outside the V&A Dundee proving particularly strong. However, it still seemed a missed opportunity not to present the piece in its original, purest form. It may have been a stretch to have included all of the opening bugle calls, given the extra personnel this would have demanded, but this was surely the perfect occasion to perform ‘The Anchor’s Weighed’ and ‘Farewell and Adieu, Ye Spanish Ladies’, which are almost always omitted today. Naturally, the normally compulsory encores could not be performed because they are all about the audience, but it was good that orchestra leader Igor Yuzefovich kept up the spirit of the occasion by presenting his own interpretation of the violin solo in ‘Jack’s the Lad’ (the Hornpipe).

Schultz performed ‘You’ll never walk alone’ and the BBC Singers sang the Britten arrangement of the National Anthem, both of which have become standard at recent Last Nights. I wish the end credits could have rolled to a recording of ‘Auld Lang Syne’, as a reminder of how the evening normally ends and of a time when we can all meet in the hall once more, but overall this was a job well done. It was not the same as a normal Last Night, and we can hope that we never have to have one like it again, but that will not stop me from having fond memories of a Last Night spent, most unusually for me, curled up on the sofa with a glass of wine.

The Last Night of the Proms, along with all other live Proms from this season and selected concerts from previous seasons, is currently available on BBC iPlayer.