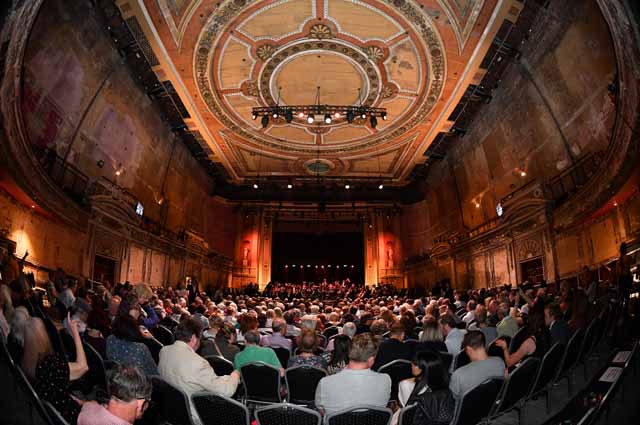 ‘Location, location, location’ is as important a maxim for performance venues as for anything else. Both the Royal Albert Hall and Alexandra Palace were constructed within a few years of each other in the 1870s, and by the same builders. However, while the former has continually flourished (although the Proms did not move in until 1941), the latter has had a more chequered history. When its theatre opened in 1875 it possessed the most cutting edge stage technology, and was immensely popular for a period. It then fell out of favour, however, after meeting growing competition from the West End, and closed. Over the years it has been a cinema, a church and, when the BBC took over one end of Alexandra Palace, a props store. Although the odd event has been held in it, it has not operated as a fully functioning theatre for eighty years, but that will change on 1 December when, following the completion of its current restoration, it opens its doors once more.

This Prom therefore represented a pre-opening event, and the programme, by focusing on Gilbert and Sullivan, found a perfect fit with its venue as the centrepiece, Trial by Jury, premiered in the same year as the theatre opened. Walking into the auditorium was an experience in its own right, as the venue presents a piece of ‘crumbling’ Victoriana that was itself influenced by Classicism. For example, the red colours and statues surrounding the proscenium arch were clearly inspired by Pompeii.

The performance by the BBC Concert Orchestra, under the baton of Jane Glover with the BBC Singers providing the Choruses of Jurymen and Bridesmaids, was not fully staged. However, director Jack Furness ensured that the principals wore full costume and that a sturdy, wooden desk was all that was needed to suggest a court of law. The pared down approach, and hence focus on the music, actually helped the audience to hone in on some of the humour, such as at the moment at which the chorus repeat the Usher’s lines in typical Gilbert and Sullivan fashion, only to be met with his cries of ‘Silence in Court’. 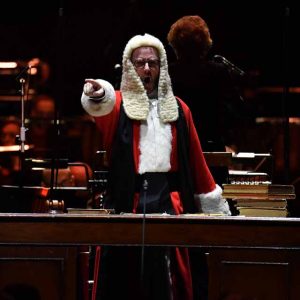 The performance was characterised by energy and dynamism, with all of the soloists revealing excellent voices and a strong penchant for comic timing. Mary Bevan as The Plaintiff was particularly engaging as she entered through the auditorium in her wedding dress, while tearing up her bouquet and sobbing on audience members’ shoulders. Then over the course of the operetta she threw herself, at one time or another, into the arms of practically every man on stage! Sam Furness actually made us feel sorry for The Defendant as absolutely everyone seemed to be against him, while Neal Davies was the very model of a Gilbert and Sullivan Judge. Keel Watson revealed his bass-baritone to excellent effect in the role of the Usher, while Ross Ramgobin as the Counsel for the Plaintiff and Edward Price as the Foreman of the Jury were also cast from strength.

One of the great achievements of the performance, however, was to keep matters suitably frivolous and make the ending appropriately uplifting, while still suggesting beneath the surface that The Plaintiff only agreed to marry The Learned Judge as a way of spiting The Defendant. Trial by Jury is, in any case, almost unique among the output of Rossini, Donizetti and Gilbert and Sullivan in seeing the ageing gentleman beat the younger man to the girl!

The first half of the concert featured two works by Sullivan and several others by his near contemporaries. It was good to hear Neal Davies sing ‘When I Went to the Bar’ from Iolanthe so that the audience could subsequently compare it with the equivalent Judge’s song in Trial by Jury, ‘When I, good friends, was called to the bar’, written seven years earlier. The real strength of the first half, however, was the opportunity that it presented to hear pieces that, although not entirely unknown today, do not frequently grace concert halls. In this way, the audience was treated to performances of the Overture to Act IV of Sullivan’s The Tempest (1861-2), the Overture to Ethel Smyth’s The Boatswain’s Mate, (1913-14, revised 1921) and three movements of Hubert Parry’s incidental music for The Birds (1883).

More obscure, however, were ‘Onaway!’ Awake, beloved’ from Samuel Coleridge-Taylor’s Hiawatha’s Wedding Feast (1898), sung by Furness, ‘All alone to my eerie … Whispering breeze’ from Alfred Cellier’s The Mountebanks (1892), sung by Bevan, and ‘So it’s kisses you’re craving’ from Stanford’s Shamus O’Brien (1896), sung by both. This is in spite of the fact that ‘Onaway!’ was a tenor’s aria of choice for decades after the cantata’s premiere, and we can certainly hope that with the reopening of this 1875 theatre there will be a similar revival in interest in such works from the period.

For details of events at Alexandra Palace Theatre from 1 December 2018 visit the designated website.