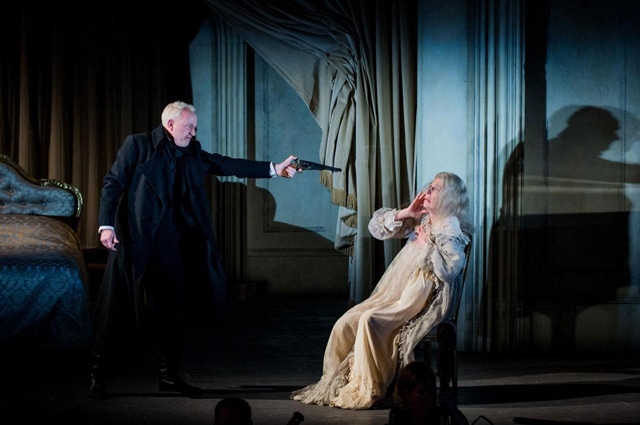 In a season that has set La bohème in Elizabethan England and Die Fledermaus in the 1920s, it may initially come as a surprise to see Opera Holland Park’s The Queen of Spades being staged relatively conservatively. It is still not actually set in its original time as the action is brought forward to the 1870s, but ultimately Rodula Gaitanou, who was associate director to Martin Lloyd-Evans on Montemezzi’s L’amore dei tre Re here last year, proves that stagings do not always need to be ‘innovative’ to hit the mark. With the atmosphere feeling Russian through and through, it reveals how sometimes opting for the most obvious setting for an opera is the simplest way to ensure a moving staging.

Cordelia Chisholm’s set sees what could be described as a proscenium arch form the backdrop to the stage, framed by two diagonal colonnades that each consist of three smaller arches. Standing in the Russian Rococo style, this forms an appropriate setting for every scene. The addition or subtraction of a few props make it clear that we are looking at a rich dining establishment in Act I’s first scene or Lisa’s rooms in the second. The proscenium arch has a curtain across it so that dramatic entrances can be made by drawing it back, or key objects such as Lisa’s bed be revealed at the right moment. In Act II the same set remains, only now the proscenium arch is brought forward. By creating a narrower space at the front we gain more of sense of Herman creeping through rooms in the dead of night, and have a larger area behind the arch to contain the Countess’s body at the funeral (which is shown) or the final scene’s gambling table.

The side arches are also curtained and help to introduce an array of effects. Lights flashing behind them create the sense of a storm, while figures scratching at the curtains from behind add to the ghostly atmosphere when the dead Countess appears to Herman. Simon Corder’s lighting is also powerful, effectively conveying the dead of night and the sense in which forces are closing in to ‘possess’ Herman. In this respect, this production reveals how much a good staging can contribute to generating atmosphere, even when the music is so powerfully gripping in the first place. 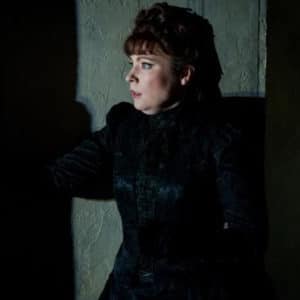 The chorus dancing at the ball is not particularly imaginative, but it is elegant enough, whilst at the end of Act I each member adopts a stylised menacing pose that is then reflected in huge swirling shadows on the set. Their slow procession to pay their respects to the Countess at the funeral is also effective because of the understated way in which it is rendered. This point might be applied to the production as a whole, whose strength rests in large part on some very telling details. It does not matter that Lisa shoots, rather than drowns, herself because it would be difficult to illustrate the latter act on this stage, and the gun becomes a recurring motif throughout the evening. At the end the Countess even hands it to Herman to enable him to kill himself, and there is not a hint of triumph on her face as she succeeds in enacting her revenge. Indeed, the closing image is of Herman’s body lying on the gambling table framed by the Countess dressed in black and Lisa in white, sporting the wedding dress that she never got to wear.

Peter Robinson conducts the City of London Sinfonia to great effect, while there are a host of very strong performances. Natalya Romaniw is outstanding as Lisa, with a voice that feels infinitely sensitive when hushed, and yet  increases in beauty and focus as it is required to open out. There initially seems to be more power than polish to Peter Wedd’s tenor, but as the rough edges are smoothed out we are treated to an overwhelming performance from a Herman who seems genuinely obsessed and disturbed. Rosalind Plowright is simply a class act as the Countess and draws out the contrast between the formidable public figure, who here is constantly surrounded by an entourage of ladies-in-waiting, and the frail old lady who is left alone in her bedroom at night. As Count Tomsky, Richard Burkhard brings the right level of tension to his ballad ‘Once in Versailles’; as Prince Yeletsky, Grant Doyle delivers a stirring performance of ‘I love you beyond measure’, while Laura Woods as Polina reveals a beautifully rich and well shaped mezzo-soprano.

Before Opera Holland Park’s season began, our preview highlighted three operas in its schedule – La bohème, Die Fledermaus and The Queen of Spades – in which London was desperately in need of a good production, having been poorly served of late. It is pleasing to report that Holland Park has delivered on all three in what must surely stand as its golden season. It has enjoyed five (main) productions and five great successes, and with its 2017 season set to include La rondine, Don Giovanni, Káťa Kabanová and Leoncavallo’s rarely performed Zazà, we can hardly wait!