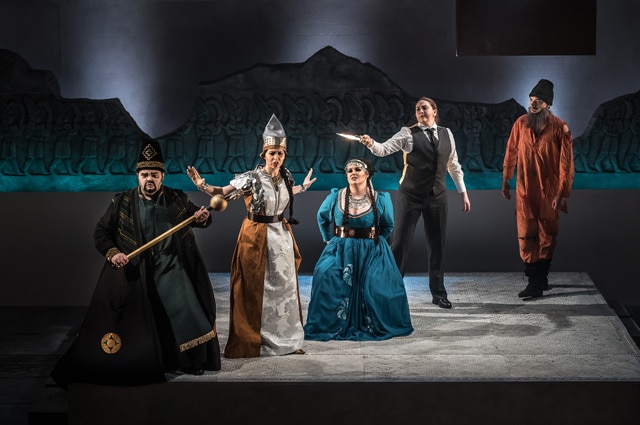 To set an opera in a museum is not an entirely original idea, as it was one employed by Opera Holland Park in 2015 for Aida. While, however, Daniel Slater may have set the action in a modern day museum, John Ramster’s production of Radamisto for the Guildhall School of Music and Drama actually stages the work in one. This may help to explain why it is more successful because, while there simply weren’t enough convincing parallels to be drawn between two ancient warring kingdoms and the modern day institution, Ramster’s approach removes the need to find the same type of synergies.

This does not mean, however, that Ramster sees no connection between the eighteenth century and the modern day. The director argues that when Radamisto premiered in 1720 ‘Instead of having another civil war, or another revolution, the British political establishment were off to the theatre’. In this way, he ‘brings this story of diplomatic reconciliation up to date’. As a result, the drama is staged in a neutral space for two Heads of State who are meeting for a summit. The principals thus adopt many striking poses that emphasise how they are performing a piece of entertainment for an audience. These work well because Handel’s era was one in which stock gestures that signified certain emotions formed the backbone to performances, thus ensuring that there is a certain sense of authenticity to the ‘exaggerated’ presentation style.

However, by removing the spectators from the stage for many sections and continually altering the set’s infrastructure through sliding plinths and descending walls, this immensely slick production does not fall into the trap that dogs so many productions that break the fourth wall. The act of a performer having to show that they are asserting a certain character can be a severe hindrance to them feeling and conveying genuine emotion with which the audience can engage. It is therefore a tribute to this production that it introduces and retains a strong concept and yet frequently allows the staging to float away from it to present real characters who inspire our interest and concern. This is no mean feat because plenty of productions that took a similar approach might be accused of simply forgetting about their underlying concept, but that is not a criticism that could be levied here. 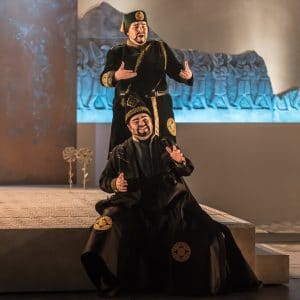 Louis Carver’s costumes come from a variety of cultures, while the artefacts that grace the stage range from ancient reliefs, laurels and masks to Baroque drinking vessels. While all of these choices have significance, on the physical level they illustrate how the museum’s holdings have been utilised. The silent ‘extras’ in the drama could either be museum staff or people hired in for the occasion, but some might be minor dignitaries at the summit who have been invited to take small parts in the entertainment. Thus, when we see several of them play prisoners who have their throats cut by Tiridate we can see the fear on their faces, but also perhaps a tinge of excitement as they get to have their starring moment.

As Polisenna sings to Tiridate the latter is forced to break character to converse with one of the Heads of State, revealing just how important it is to ‘pander’ to him. The two Heads of State (one male and one female) sometimes enter the drama themselves, leading the dancing at the end of Act II and looking profoundly put out when the plot seems to be going in a direction they do not like. This has one particular advantage at the end. Normally, the sudden and entirely arbitrary change of heart of Tiridate is so risible that it can even leave audiences laughing. Here, however, we are provided with a reason for why it should occur. It appears as if the story is about to have an unhappy conclusion, but then these Heads jump in to say that this is not what they want, which in turn forces the performers to change the ending accordingly.

Chad Matthias Kelly conducts, while the Guildhall opera singers present the first and more rarely performed version of the work that heralded in Handel’s twenty year long domination of London opera. It was formulated predominantly for the composer’s favourite female singers, and it certainly provides the opportunity for all of the women here to shine.

As Polissena, Margo Arsane reveals a beautiful, nuanced and supple soprano that executes some difficult lines extremely well. As Radamisto, Chloë Treharne’s mezzo-soprano is notably secure and possessed of a clear yet vibrant edge that makes it stand out. Joanna Marie Skillett as Tigrane reveals some very intriguing grains to the voice, Jade Moffat as Zenobia possesses a beautifully rich and mature mezzo-soprano while Elizabeth Skinner displays a clean yet full soprano as Fraarte.

The men fare equally well, with Bertie Watson being an effective Farasmane and Dominick Felix revealing a brilliantly powerful tenor as Tiridate. His performance style is also perfect for the production as he combines malevolence with theatricality to create a highly engaging character.

Casts vary over the run. For further details visit the Guildhall School of Music and Drama website.