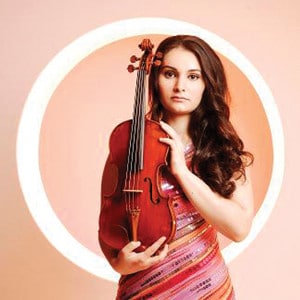 This lunchtime recital at Wigmore Hall served two purposes: it marked the venue debut of violinist Nazrin Rashidova and launched her recording with pianist Roderick Chadwick of duo repertoire by Leopold Godowsky, released on the Naxos label. Godowsky featured in the recital, but the programme was constructed to showcase several aspects of the two musicians’ art.

Mozart’s sonata in B flat, K. 378, had immediate fluidity of tempo in the opening movement and the instrumental balance somewhat favoured the keyboard, but Nazrin Rashidova made her mark too with tonal cohesion and an innate understanding of Mozartian style that was never overstated. The middle movement was suitably filled with cantabile violin lines, discretely sustained over the evenly figured piano accompaniment. The finale contrasted nicely, with dashing brio exhibited by both players keen to make emphases register where possible whilst maintaining an ambiance of bonhomie.

Five of Godowsky’s Twelve Impressions were selected for inclusion, with three at this point in the programme. Written in 1916 and dedicated to Fritz Kreisler and his wife, Godowsky’s pieces are unashamedly heart-on-sleeve Romantic stuff. The first, Largetto lamentoso, showed its emotional depth in the long vibrato-enhanced violin lines laid over rich, deep piano chords, its train of thought carefully built and masterfully handled in the concluding decrescendo. The second Impression, Profile (Chopin), had obvious links to Chopin’s waltzes. If the opening statement seemed initially a touch impetuous in Rashidova’s hands, it quickly settled to a romance of elegance that was played with deft flair. The ninth Impression followed, Valse Macabre, a waltz of an altogether more robust making, which found both artists turning inferences into downright declarations with assuredness.

Szymanowski’s Myths formed another significant element within the whole, but in rather unusual circumstances for a concert setting. The Fountain of Arethusa was separated from the later movements Dryads and Pan by the presence of two of Moritz Moszkowski’s Spanish Dances. There is no doubt that this created a greater sense of contrast between the individual items but for all the enjoyment of it I cannot help wondering if this is an approach I would like to encounter  often. The Fountain of Arethusa found a barest thread of tone turn to a tumult of passions by Rashidova’s violin over the impression of dappled wateriness in Chadwick’s effortless handling of the piano part. Glacial harmonies too emanated with ease from Rashidova’s incisive fingerwork which was matched by her no-holds-barred bowing, building the tension inexorably. The muted strings used within Dryads lent immediate atmosphere against the brilliance of Chadwick’s pianism. Pan was possessed of a compelling unity of purpose from both players: exactly intoned harmonics once more gave way to a reading that was at once threatening, thrilling and powerfully shaped without resorting to artifice.

The two Spanish Dances by Moritz Moszkowski brought differing characters to the recital stage. The second dance of the set displayed a rather middle-European face of passions held in close check, once the initial theme had been presented. The occasional virtuosic firework was launched by Rashidova when required, yet by now it was clear that she is at heart a serious violinist who has no mere reliance on showy display. The fifth dance was again a bravura piece, more overtly Spanish of flavour. If momentarily absolute security of intonation escaped Rashidova, her playing, confidently supported by Chadwick, lacked nothing in spirit and panache. Together they handled the mercurial transitions of material with ease and maintained a robust sense of structure.

A final pairing of Godowsky’s Impressions completed the programme. The Tyrolean (Schuhplattler) was a lively clog dance, suitably mannered, somewhat four-square in form and hard-edged in the violin part, yet in a manner that suited the writing. The Wienerisch – in the Viennese manner – was gentle, elegant and filled with the insouciance of nineteenth-century café culture society. There’s no doubt that Godowsky’s music is of its time, but also no reason why it should not be hard more often today.

For the encore one might have expected more Godowsky, but instead it was Kreisler’s Caprice Viennois, aptly continuing the mood of the preceding Godowsky. Always a good digestif after a filling main course, the playing was expressive and tasteful before concluding with a final showy gesture filled with the confidence of artists who know fully what they are capable of. I hope to hear Nazrin Rashidova and Roderick Chadwick again in concert before too long.