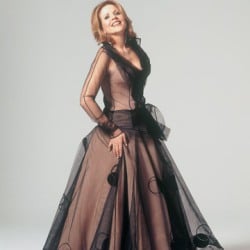 For her latest concert at the Barbican, American soprano Renée Fleming sang music in four languages by eight composers from three centuries. It was an impressive feat of variety, but stunning as she looked in her John Galliano dress and much as I admired this artist’s prowess in arias by Strauss, Korngold and Smetana, there’s no denying that she struggled with some of the items on the programme. And she wasn’t aided by the frequently abysmal conducting of Andreas Delfs and the sometimes insensitive and disengaged playing of the Royal Philharmonic Concert Orchestra.

One of the biggest irritations of the evening was both the excessive quantity and poor quality of the orchestral pieces interspersed too generously between the arias. Mozart’s Overture to The Magic Flute was a decent enough start, even if it didn’t contain the precision or dynamic contrasts of the greatest performances. But the solo horn player was seriously over-taxed in the Nocturne from Mendelssohn’s A Midsummer Night’s Dream – a work that didn’t fit into its surroundings at all. Nor was the Overture to Verdi’s La forza del Destino a sensible choice as the penultimate item of the first half: this is a beginning, not an end. And the conductor’s random waving of his arms in the air did little to encourage the RPCO to bring out the clean classical lines of Verdi’s music.

Verdi suffered at the hands of Ms Fleming, too. She sang Leonora’s Tacea la notte placida from Il trovatore to end the first half, and while the slow opening section was beautifully sung, I found her beaming face a highly inappropriate expression of words such as melancholy’ and mournful’. Then the cabaletta or fast section of the aria, Di tale amor was a huge disappointment, the singer’s coloratura failing her and being replaced by breathy sounds. The same happened in Mozart’s Laudamus te from the C minor Mass, which opened the evening uncomfortably with some barely audible phrases and bungled scale passages. The orchestra (or conductor) was once more at fault in Dank sei Dir, Herr by Siegfried Ochs, larding on the vibrato where cleaner lines were called for, though here Fleming’s naturally beautiful legato was much more of a pleasure to listen to.

Vissi d’arte from Puccini’s Tosca would have been perfect had the soprano removed the smile from her face. For me, the correct emotion was lacking both in that and Cilea’s Poveri fiori from the underrated Adriana Lecouvreur, while the latter also suffered from strange phrasing. Yet Fleming’s creamy voice did redeem most of the performances: if only it had all been a bit less bland and more engaging.

The second half redeemed matters hugely, though the orchestral pieces were increasingly irritating here. The Overture from Korngold’s Captain Blood was just a headache of brash brass instruments playing as loudly as possible not their fault but the result of the composer’s banality and both Dvořák’s Slavonic Dance in E minor and Delius’ La Calinda from Koanga were twee, generic, repetitive works, saved only by the excellent solos by the flautist, oboist and clarinettist.

Fleming was far more relaxed and devoted to her task in the second half, and I felt that the music suited her talents more. To hear her sensuousness of line in Ich ging zu ihm’ from Das Wunder der Heliane was to hear a great artist in her prime, while an aria from Smetana’s Dalibor was the most vividly acted and thrillingly sung aria of the evening.

However, it was in the closing scene from Strauss’ Daphne that Fleming really sang with the greatest ease and comfort. It made me greatly regret not having heard her sing the whole opera in concert with Semyon Bychkov a few years ago: her projection, dynamic range and phrasing were all wonderful. And both the encores – an aria from Korngold’s Die Kathrin and O mio babbino caro – were impressive and heartfelt. A little too late, perhaps, to make one forget the insecurities of the first half and the conducting throughout, but Fleming’s reputation can have been little damaged by the rapturous reception of an adoring audience or by her magnificent Strauss and Smetana performances.