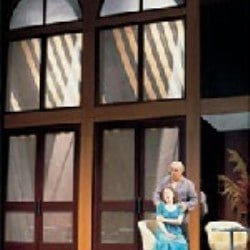 Set in Little Italy, New York, in the 1950s, Miller’s Rigoletto takes as its cue the shadowy control of the Mafia over the local society.

The bleak staging designed by Patrick Robertson and Rosemary Vercoe is an ideal replacement for the corrupt court of the Duke of Mantua, who becomes known as just the ‘Duke’ in James Fenton‘s lucid translation. The Mafia aspect also makes the Italian names and occasional untranslated words such as ‘vittoria’ fit credibly into a modern American setting.

This is one of ENO’s strongest revivals of recent times (the eleventh of this production), with a strong cast, superb conductor and the orchestra in better form than they have been for ages. The production’s settings a plush hotel reception with neon lights, a wonderfully realistic New York backstreet complete with West Side Story-type fire escapes (‘modern verismo‘, perhaps?) and a riverside bar with jukebox to provide the accompaniment to the Duke’s final aria (get the joke?) are more than just stunning: they actually transport the audience to the locations they are meant to represent. This is gripping, gritty theatre.

Heading the cast was veteran Alan Opie, surely one of Britain’s most underrated opera singers. He inhabited the role of Rigoletto with an understanding of its complexity, and in particular, he shifted ably between the character’s ugly and noble qualities. His tragic venom when anticipating the Duke’s assassination (which he commissions) gave way most believably to his fatherly concern for his daughter Gilda’s safety, the former serving the latter. And his lyric singing in possibly the greatest of Verdi’s father-daughter duets was an impressive foil to his grainier singing in the opening scene.

As Gilda, Judith Howarth was not a total success vocally, but she gave a most affecting performance. The part lies too high for her (the impressive high D flat notwithstanding), and she can’t muster legato in the upper range. Nevertheless, she was always engaging, and brought pathos to the death scene.

Peter Auty was one of the best Dukes of recent years. The opening aria was sung with great lyricism, Women abandon us concluded with a strikingly secure cadenza, and most of all, his contribution to the Act 2 opening showed stamina and an exciting ring to the voice.

Most of the smaller roles were imposingly sung as well. The ever-wonderful Leah-Marian Jones as Maddalena, Brindley Sherratt‘s sinister Sparafucile, and Judith Douglas as Giovanna are only three examples of an ensemble cast that shows that the company is in great shape.

One major debut should be mentioned: the introduction of surtitles above the stage, projecting the text as it is sung to aid comprehension. When many of today’s most popular operas were originally written, lights were provided throughout the theatre and audiences were given the libretti as a matter of course, so that they could understand what was going on. Therefore, it is pretentious to suggest that sitting through an opera without understanding a word of it is virtuous or traditional. In fact, it is more traditional to have full access to the text, and the audience for this Rigoletto was noticeably more engaged with the story thanks to the provision of surtitles, so I cannot applaud their introduction enough.

This is a strong revival from every point of view. Highly recommended.