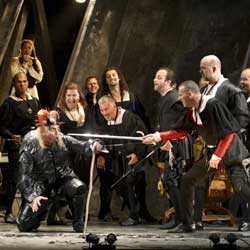 Before the curtain rose on the first night of Covent Gardens current production of Rigoletto, the audience was informed of the sad news that Joan Sutherland, one of the world’s greatest sopranos, had passed away earlier that day. The Royal Opera House announced that they were dedicating this performance to her memory, and from the moment the curtain rose, it was clear that a fitting tribute to this magnificent singer was on its way.

This is the fifth revival of David McVicar’s production at Covent Garden, first staged in 2001. McVicar’s interpretation of the opera is somewhat darker than other productions, and this was reflected in the mostly shadowy lighting and an extremely menacing storm scene. The set was cleverly built to be reversible, the palace on one side yielding to Rigoletto’s home, which doubled as Sparafucile’s inn, on the other. The timing of scene changes was mostly spot-on, although a prolonged shift of the set between scenes in Act I seemed to take longer than strictly necessary.

An energetic and bawdy opening scene was cleverly kept on the side of good taste, even to the point where the full-frontal nudity of a brave chorus member seemed completely in keeping. Similar risqué elements resurfaced at various points during the Duke of Mantua’s scenes, but the rest of the performance carried the dramatic weight and pathos that this tragic story demands.

Dmitri Hvorostovsky reprised the title role of Rigoletto for the first time at Covent Garden since 2005, and he held the audiences attention from the moment he appeared on stage to his desperate, desolate parting line at the end of the opera. His rich, dark and resonant baritone was extremely well-suited to the role, and every phrase was sung with real emotion and conviction. Dramatically he was also excellent; he was entirely convincing as the deformed hunchback, nimbly capering round on his two mismatched walking sticks when entertaining the court, but letting the characters raw discomfort with himself show during his scenes at home with his daughter. He acted every inch the protective father his devastating cry of anguish upon discovering that Gilda was missing raised goose bumps and created a brilliantly moving end to the first act.

Wookyung Kim’s Duke of Mantua was a compelling dramatic presence and performed with real energy and commitment. His voice is lighter than one might expect of a Verdian tenor, but he displayed remarkable agility and flexibility and a real sparkle in his sound. His La donna mobile was performed with panache and a healthy confidence, his secure and impressive top notes earning him rapturous applause. Patrizia Ciofi as Gilda seemed to be suffering a little from technical issues (or perhaps nerves) for much of the first act, but seemed to find her feet again during Caro nome, where a lovely resonance extended throughout her range.

In the smaller roles, Michael Druiett stood out as an imposing Count Monterone, his booming Verdian baritone matching up to his assertiveness on stage. Raymond Aceto’s resonant low notes made him a suitably terrifying Sparafucile. Daniela Innamorati’s plummy and rich mezzo-soprano lent itself well to her role as the seductive Maddalena, and the beautiful Act III quartet was executed with perfect ensemble and real musicality. Elizabeth Sikora as Giovanna produced a beautifully focused sound, and Louise Armit also made her mark in the often unmemorable role of Countess Ceprano with her wonderfully rich and creamy sound.

The Royal Opera House Chorus, led by Zheng Zhong Zhou as the poet Marullo and Lukas Jakobski and Iain Paton as the courtiers Ceprano and Borsa, took an extremely menacing approach to their roles and were suitably intimidating in their harassment and emotional torture of Rigoletto.

Rigoletto still provokes a deep emotional response both dramatically and musically even today, and this production sensibly chooses to emphasise what is already there in terms of plot and emotion, rather than obscure or modernise it. Joan Sutherland first performed the role of Gilda at Covent Garden to great critical acclaim in 1957, and I doubt that she could have found much at fault with this performance. An extraordinary tribute to an extraordinary singer.