A strangely timeless, but nonetheless comfortingly familiar Rigoletto from The Royal Opera. 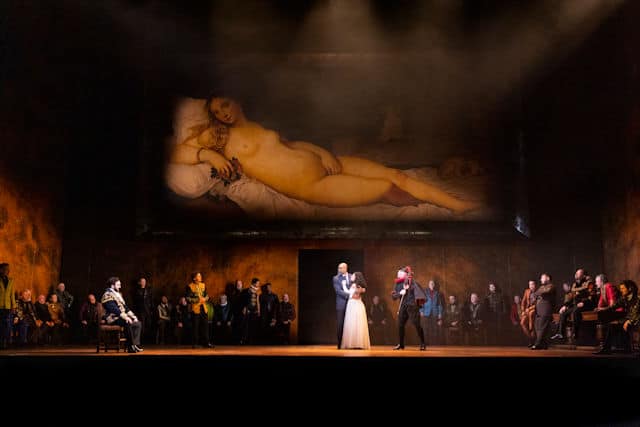 The curtain opening on a Caravaggio tableau vivant is certainly an impressive gesture, guaranteed to wow an audience starved of live opera during the pandemic. And, along with the vast Titian canvases of Simon Lima Holdsworth’s set design for the Court at Mantua in the Royal Opera’s new Rigoletto, it certainly banged home the Renaissance setting of Hugo’s original Le roi s’amuse. But Oliver Mears’ production is temporally fluid, for, although we see Rigoletto in cap and bells, and the court in a mix of 16th and 19th century silken finery, once the action moves outside the palace, these are replaced by 1940s overcoats and trilbies; Gilda is asleep, under a cheap reproduction of the Madonna, in a net curtained upstairs tenement, and Sparafucile’s house in Act III appears to be a public lavatory / bus stop combo. Aside from the obvious symbolism in the choice of paintings (Venus of Urbino in Act I, The Rape of Europa in Act II), the reason – other than whimsy – for all this fluidity wasn’t clear.

Rigoletto is more 19th century melodrama than tragedy, and interpretation practice for modern sensibilities seems to be either to concentrate on the individual stories through focused acting, or to camp up the grand guignol. Mears’ production takes an uncertain middle line resulting in some decent, but sometimes stilted, stage work, not helped by the large rear stage sets that force much of the action into a frontal left to right corridor, giving the whole thing a toy theatre feel. An uncluttered stage was deployed only for the final scene, when Sparafucile’s house – in a faintly comedic moment – sidled off stage right to reveal the beautifully lit Minicio marshes, where the (ironically, albeit artistically appropriate) near static, two-person drama played out in emptiness. 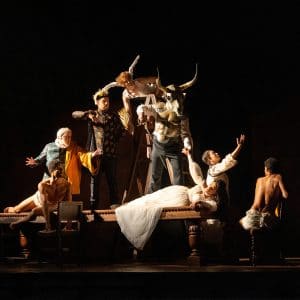 Musically, the production was what you’d want from comfort food after a lengthy fast: familiar, warming, and nothing too risky. Antonio Pappano knows how to get the best out of singers and opera orchestras, and his sure handling of the score was evident: lightness of touch where required (Rigoletto and Gilda’s Act I duet work was as tender as you’d want; Schiuso era l’uscio! made you – very briefly – warm to the Duke), and some cranked-up drama when appropriate (the Act III storm music complemented the brilliant effects – with real rain! – perfectly). As always the ROH orchestra and chorus lived the music, providing a reliable canvas for the principals’ brushstrokes. The male chorus in particular were deliciously reactive in the court scenes – casually lighting cigarettes during Rigoletto’s Act II grief, precisely co-ordinating their Se l’amante perdesti.

The main voices were generally good. Liparit Avetisyan (Duke of Mantua) has a solid lyric tenor voice, and his delivery was exemplary, if a little safe. Carlos Álvarez is no stranger to Verdi baritone roles, and his ability to manipulate his voice between focused edge and a more harmonic imbued fuzziness served him well in delivering the title role’s alternating bitter anger and profound heartache. Lisette Oropesa has received many plaudits for her Gilda, but perhaps a period of inactivity has taken its toll; although her solid, slightly spread voice in the lower register was there, along with the gloriously bell-like sweet spot at the top of the stave, several of her top notes were on the scratchy side.

Of the supporting roles, the evergreen Brindley Sherratt as Sparafucile was undoubtedly the star – his rich basso profundo dispensing casual menace with every utterance – but Ramona Zaharia was also a delight, bringing a suitably seductive husky quality to Maddalena. Sadly, Eric Greene’s unfocused baritone made Monterone more petulant than maledictory. Blaise Malaba (Ceprano) has only a smattering of lines, but one was left wanting more from this velvety voice: here’s hoping.