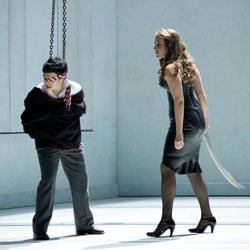 Joseph Addison’s remark in The Spectator of March 1711, that the staging of Rinaldo was “filled with thunder and lightning, illuminations and fire-works” seemed more than ever relevant last night, when the lighting failed with a spectacular flash during ‘Cara Sposa’. All was restored to normal after a surprisingly brief pause, however, and the audience went on to enjoy an evening of exceptional illumination and fireworks, both theatrically and vocally.

How to stage Handel operas? We’ve all been there, of course, some of us more happily than others – my favourites are the so-called Handel purists who seemed not to understand the ROH’s perfect staging of Orlando, with its Renaissance iconography which seemed to be unfamiliar to them. I expect similar bewilderment after this production, though for different reasons. Robert Carsen always gives you something different, but not gratuitously so; his ENO Semele was modern in appearance, yet still respected the music and relationships between the characters, and this Rinaldo was similarly successful.

The framework is a public (i.e. private, for U.S. readers) school classroom, in which our hero is a lovesick teen, complete with piped blazer and surrounding bullies ready to mock his devotion to his beloved. The villains are a brutal schoolmaster and a dominatrix teacher, and the lesson objective is presumably the acquisition of the globe which is the set’s central image – we see that globe as a football later on, sparred over by the opposing Christians and Saracens, aka St Cake’s and St Trinian’s (Rinaldoooo!). I won’t spoil the ending, but suffice to say that all comes full circle in a beautifully satisfying way. It made complete sense to me; after all, the connections between school and war are obvious, and warfare is so often seen as a giant game.

Many of the cast were Glyndebourne debutants, making strong impressions in a staging which gave them every chance to shine. The ‘Good Boys’ were led by Sonia Prina’s Rinaldo, totally convincing whether as a teenage loner or a triumphant warrior, singing with mostly steady tone and remarkable clarity. She’s not thrilling in ‘Venti, turbini’ and ‘Or la tromba’ as, say, David Daniels is, but she shapes the phrases with sincerity and manages to ride with the trumpet, not an easy journey for anyone.

The Armenian mezzo Varduhi Abrahamyan was a striking Goffredo, singing with confident lustre, and Goffredo’s daughter Almirena provided another remarkable debut in the form of Anett Fritsch, who took over after Sandrine Piau had to withdraw with a knee injury. Ms Fritsch carried off the production’s concept of her as a teacher’s pet to perfection, and she took ‘Lascia ch’io piango’ in her stride, singing with delicacy and poise. Tim Mead’s Eustazio was another notable performance, not a debutant here since he has sung the title role in Giulio Cesare.

As for the bullies, aka Saracens, Luca Pisaroni stole the show with his Argante, his first aria a model of Handelian bass style. The wicked sorceress / schoolteacher was Brenda Rae, making her house debut with thrilling acting and singing despite being poured into a PVC number which must have constricted her breathing as much as it set the pulses of many audience members racing.

William Towers was an endearingly other-worldly Magus, his beautiful voice and noble presence ideal for this role even though he was presented as more Professor Frink than a wise seer.

As for the Furies, I was that girl – you know, the carefully pre-scruffed blazer, the ‘customized’ pelmet skirt, the artfully messy hair, the ‘attitude’, the vicious cruelty… oh hang on, not that last bit, that had to wait until I became a music critic. Those Furies were fabulous – in all their guises, and the Sirens sang so invitingly that no one could resist them, Kate Moss hair-handling and all.

Musically speaking, the finest contribution of all came from the Orchestra of the Age of Enlightenment, conducted by Ottavio Dantone with lightness of touch, loving shaping of the phrases and cushioned support for the singers. I can’t recall hearing such eloquent continuo playing from any orchestral pit, anywhere, with so many moments when the ear was attuned so mesmerizingly to the instruments. David Blackadder’s trumpet, of course, blazed out gloriously – he nearly won that battle with Rinaldo.

The ‘illuminations and fireworks’ are all brilliantly conceived – the sirens in their little boat, the ‘interactive blackboard’, the swift costume changes, the fights and conflicts, the PC Plod style riding of the bicycles aka ‘trusty steeds’ – but it is the production’s respect for the interactions between the characters, its compelling ability to tell the story, and above all the superbly integrated singing and playing, which should send you straight to Glyndebourne’s excellent ‘Returns Club’ to see if you can get in for one of the remaining performances.