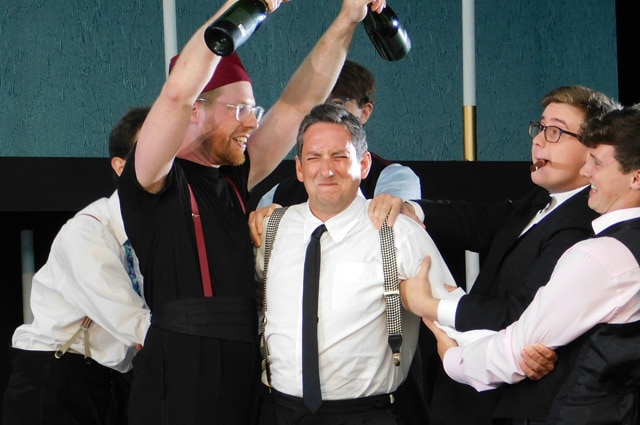 Although Rita and Die Entführung aus dem Serail do not strictly constitute a double bill, because it is possible to book tickets for one without the other, one of the strengths of West Green House Opera’s programming is the opportunities it presents for audiences to enjoy two such disparate pieces on the same day.

Rita is a one act comedy, which Donizetti completed in 1841 under its original title Deux hommes et une femme but never saw performed in his lifetime (it finally premiered in 1860). Like many an opera, it concerns two men fighting over the same woman, but in this instance each is desperately struggling to ensure that they do not end up with her!

The domineering Rita is married to the timid Beppo, with her transforming of his failing inn hardly justifying the frequent beatings she gives him. Her first husband Gasparo was as abusive to her as she now is to Beppo but, Rita mistakenly believes, died after being kidnapped by pirates. Gasparo, for his own part, thinks Rita is dead following a house fire that destroyed all of her possessions. He is therefore shocked when he arrives at this inn to discover Rita there, while Beppo spies his chance to escape Rita’s clutches as the first marriage would take precedence over the second.

Beppo and Gasparo agree to a series of games in which the prize is Rita, thus prompting each to try to lose. In the end, however, Beppo refuses to allow Rita to go back to Gasparo accepting that Gasparo’s treatment of her was even worse than her treatment of him. Rita in turn promises to be a more loving wife to Beppo, while Gasparo also proclaims that he will treat the new fiancée he has with more respect. Whether he really is, however, the reformed man that he claims to be is anyone’s guess.

The subject matter, which explores abusive relationships in which both men and women are beaten, is very dark. However, director Morag Joss, best known for writing psychological thrillers, transforms what could be deemed a totally tasteless piece into something utterly hilarious. She does this by meeting the macabre elements head on, so that we do not feel the subject of domestic violence has been conveniently swept under the carpet, while also introducing enough hyperbole so that we can feel justified in not taking anything we see seriously. The earthy English translation, which includes some swearing, helps in this, while the updating to the modern day from the original eighteenth century setting is also successful. Rita has transformed Beppo’s rundown bar into a gastropub and Joss’ brilliant set sees it halfway through its conversion as Beppo is in the process of painting the counter. One interesting detail sees an old menu headed Beppo’s showing ‘Ham & chips’ alongside a new Rita’s menu revealing ‘Dry-aged Hurstfield Ham’ (the festival’s chairman is Glenn Hurstfield) served with ‘Hand cut Maris Piper chips’. 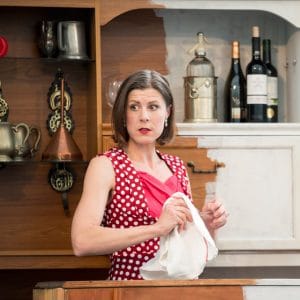 James Sherlock’s conducting of Ensemble Passio is excellent while Gillian Ramm as Rita, Aidan Coburn as Beppo and Andrew McTaggart as Gasparo all throw themselves so completely into their parts that this production feels exceptionally slick and accomplished from start to finish. Performed in West Green House Opera’s Lakeside Pavilion it proves the perfect lunchtime treat.

Across the other side of the gardens in the larger Green Theatre, Spanish director Rafael R. Villalobos makes his UK debut with Die Entführung aus dem Serail. It utilises the same two-tiered set as Richard Studer’s production of Un ballo in maschera staged a week earlier, but changes the dominant colours from black and dark gold to black and white to create quite a different aesthetic. During the Overture we see the wedding between Konstanze and Belmonte about to take place before Konstanze suddenly (and it seems willingly) goes off with the Pasha instead. The rest of the drama then plays out against the backdrop of the wedding reception that never was. For example, during ‘Durch Zärtlichkeit und Schmeicheln’ Pedrillo silently coaxes Osmin into giving Blonde the flowers that form a table decoration, knowing it will infuriate her even more. Similarly, the brew to intoxicate Osmin is concocted from various bottles of alcohol from the reception.

Much of this modern staging is highly effective, including the beautifully sung Quartet ‘Ach Belmonte! Ach, mein Leben’ that ends Act II. For parts of it each principal occupies a separate ‘cubicle’, created simply through dividing poles, on the upper tier, thus enabling them to display their very personal thoughts and reactions to the situation. However, during the Overture and throughout there are certain hints in Konstanze’s expressions and gestures that her feelings for Belmonte are somewhat ambivalent. Since this does not tie in neatly with the story being told, it does feel like introducing ambiguity for ambiguity’s sake.

Oliver Zeffman conducts the Melos Sinfonia with the right combination of sensitivity and exuberance, while from among the strong cast Heather Engebretson, who has appeared as Barbarina and Sophie (Werther) for the Royal Opera and at many of the world’s other leading houses, stands out. With a beautiful soprano, capable of tackling a large number of phrases without a breath, she provides an exceptionally sensitive and feeling portrayal of Konstanze. However, Oliver Johnston’s Belmonte certainly equals her, making their duet ‘Welch ein Geschick! O Qual der Seele’ particularly affecting, while Elizabeth Cragg as Blonde, Nicholas Sharratt as Pedrillo, Barnaby Rea as Osmin and Klemens Koehring as the Pasha all play their parts to great effect.

Rita is deserving of five stars and Die Entführung at least four, but the day they create together certainly merits the highest rating. If West Green House is not a summer opera venue you have ever tried, it is worth putting the final week of July 2018 into your diary right now.