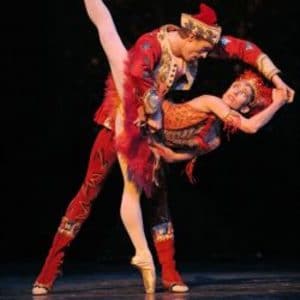 Back in the autumn, this mixed bill of short ballets was to have reached a climax with Jonathan Cope performing the role of Ivan Tsarevich in Stravinsky and Fokine’s The Firebird to mark his retirement from the Royal Ballet as a performer. But in January he was involved in a serious road accident, bringing to an end the chance of saying farewell in the ideal fashion.

Nevertheless, he stumbled onto the stage on crutches at the curtain call, and made a short but affecting speech to thank the audience for the warmth he has received over the years. They responded with a standing ovation.

One missed the presence of Cope in the cast of Firebird, because it was a surprisingly lukewarm affair. The music is vibrant, but was given a humdrum reading by Barry Wordsworth; the orchestra didn’t seem to come to life all evening, in fact.

Valeri Hristov filled in for Cope, and showed some nice lines, even if he wasn’t quite inside the role. Isabel McMeekan was a notable Tsarevna, though the scene with the Enchanted Princesses was a bit routinised; Christopher Saunders gave the magic Kostcheï an appropriately evil dash.

The programme opened with Balanchine’s Ballet Imperial. It’s an elegantly designed production, realised by Anthony Dowell from Eugene Berman‘s original sets and costumes. The latter in particular are stunning, but I found Tchaikovsky’s Second Piano Concerto a rather overblown piece of music to go with it. True, it’s a tribute to the Russian classics, but at least ten of the ballet’s forty minutes must have been taken up with less than inspired cadenza passages for solo piano, and it all got a bit too much. Philip Gammon‘s performance also seemed to run out of energy.

However, there were some winning contributions onstage. Alina Cojocaru‘s technique is effortless, and something of her ease seemed to rub off on Federico Bonelli; a trust between them made the lifts exciting to watch. A notable input from Sarah Lamb, too, whose energy and decisive pirouettes surely point towards a big career.

The evening’s highlights were Balanchine’s Afternoon of a Faun and Tchaikovsky pas de deux. The former is set in a ballet studio and involves only two dancers. The young man wakes from sleep, and on discovering a girl in the room, goes on to perform an erotic duet with her. Ivan Putrov was superb as the Faun, every stretch and movement carefully prepared and dexterously performed; perhaps Roberta Marquez was a bit uncommunicative as the girl. In the Tchaikovsky, Marianela Nunez and Carlos Acosta built on their brilliant partnership from last year’s La fille mal gardée to pull off a breathtaking display of technical finesse. In particular, Acosta’s leaps in the final movement had that unusual hanging quality which is rare to behold nowadays.

So a mixed bag, but it undoubtedly had much to offer.