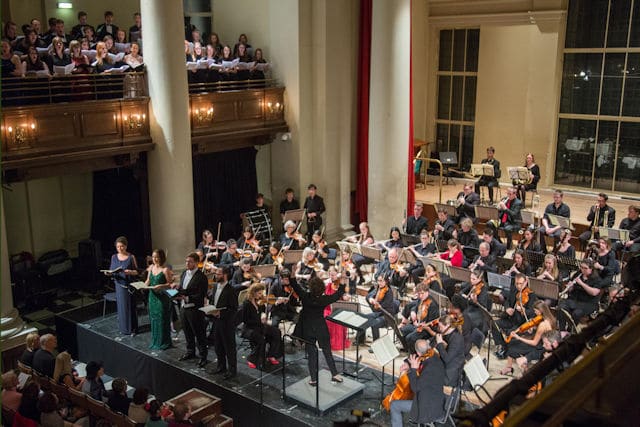 Over the past decade, the choir of Royal Holloway under Rupert Gough has made a name for itself, releasing 15 albums to date, not a few of which are of music by contemporary ‘Baltic’ composers such as Dubra, Miškinis and Kõrvits. Wednesday’s concert, which featured not only the choir but Royal Holloway Chamber Orchestra (mixed in with mentoring members of The London Mozart Players) and the larger University Chorus under Gough and Rebecca Miller, was a further demonstration of the institution’s commendable musical outreach programme.

A couple of new works opened the first half, the first of which, Andrea Tarrodi’s Number 9, Number 9, was a Royal Holloway commission. Riffing on phrases from Beethoven’s ninth symphony, along with the Beatles’ Revolution 9, the piece began with a miasma of quiet strings and trilling winds from which occasional quotes – such as a modified version of the Alla marcia introduction from the symphony’s Finale – emerged. It’s a fascinating work, definitely minimalist in its inspiration (a harmonic stasis prevails, which is only occasionally broken by sudden loud musical quotations), and the orchestra, under Miller, gave it a nuanced and atmospheric performance.

Cecilia McDowell’s unaccompanied choral work Brightest Star also received its UK première. The work was written for the centenary of the International Red Cross, with a text inspired by the relief of the Channel Islands in 1944.There’s a strong rhythmic drive to the piece that brings to mind Barber’s A stopwatch and an ordnance map, and the choir delivered this well, the staccato and legato phrases alternating seamlessly between high and low voices; the subsequent declamatory homophony was well blended and precisely controlled.

McDowell’s Ave Maris Stella for choir, soprano soloist (Sarah Fox) and string orchestra was also given a slick and well-calibrated performance. It’s a very approachable piece, full of lush suspensions in both strings and voices, along with declaimed legato passages by the soloist over quiet string chords; lovers of Morten Lauridsen’s music will find instant rapport.

2020 marks the 250th anniversary of Beethoven’s birth, and the performance of the composer’s ninth symphony was doubtless among the first of many this year; the proximity of a performance of ‘Ode to Joy’ to the UK’s formal leave-taking of the EU also didn’t also go unremarked.

The ninth presents all kinds of challenges to both orchestras and singers (not least Beethoven’s optimistic requirements from singers’ ranges and stamina), and, on the whole, the orchestra and chorus under Miller weathered them well to give a satisfyingly exuberant account. Miller’s dramatic conducting style was perfect for the work, and she coaxed some well-executed light and shade out of the performers. Her tempi were brisk throughout, and even the trio in the second movement was on the sprightly side, such that the horns were nearly left behind. The acid test of a Beethoven nine, though, is not so much the delivery of Sturm und Drang, but the subtlety needed for the third movement. It could be Mozartian in its execution but for Beethoven’s more muscular treatment of line and orchestration, and a great deal of care is needed over textural blend – the horns, for example, alternate between accentuating their obbligato passages and fading into the harmonic texture. Sadly, control of these finesses went a little awry, along, occasionally, with string intonation, and the movement was the least convincing of the four.

The soloists (Sarah Fox was joined by Felicity Turner, Christopher Willoughby and Julian Debreuil) acquitted themselves well, although Willoughby’s lyric voice could have done with a touch more Helden edge for Froh.

Choir of Royal Holloway on Spotify