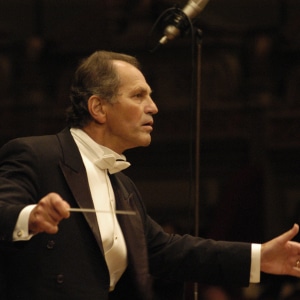 The honour of opening the Royal Philharmonic Orchestra’s 2014/2015 season at the Cadogan Hall fell to guest conductor Cristian Mandeal, a figure well-known from his work with the Hallé orchestra in Manchester over many seasons, but here making an all too rare London appearance. The performance of Beethoven’s Egmont Overture was full of dramatic portent from the outset with robust string tone, particularly in unison, and lively woodwind contributions particularly apparent, as was the edgy brass when called for. This was big-boned and muscular Beethoven, and in being so it found exuberance in the blasts of heroic fervour that readily conveyed the romantic inspiration Beethoven drew from Goethe’s creation.

Brahms’ Violin Concerto in D major followed, with Tianwa Yang as the soloist. The opening movement was carefully shaped by Mandeal who coaxed playing of textural balance from the orchestra, with a sweet warmth in the cellos that gave the string playing a particular sense of life. Upon entering the fray Tianwa Yang quickly established her presence through precision of attack, gainfully meeting the challenge of unifying the grand melodic gestures with the intricacies of passagework, often played with a graceful mezzo-piano tone that made one want to revel afresh in the concerto’s many details. Indeed, the playing of Joachim’s cadenza was an extension of this with the volleys of bowing and furious finger work being thrown off with dextrous ease before the final gathering of thematic material alongside a satisfying orchestral tutti.

Brahms might have thought that he penned “a feeble Adagio”, but under Cristian Mandeal’s direction the Royal Philharmonic Orchestra played it with sensitivity and feeling whilst making much of the contrasts offered by rubato along the way. Probing and intelligent, Mandeal found in the music an autumnal beauty drawn largely from the interplay of the woodwinds’ freely flowing tone. Against this accompaniment, which increasingly appeared conceived as a transition of brooding frustrations lightly veiled, Tianwa Yang found apposite refinement in the restraint of her part. All the greater contrast was to be had then in the finale, which Cristian Mandeal whipped into a real firecracker of a performance, full of detail and incident whilst being elegant in its execution. With the final furlong in sight conductor, orchestra and soloist united as one to end as they had begun by bringing out the glorious and generous nature of Brahmsian weight and texture in the concerto’s writing.

If one was in any doubt that Tianwa Yang is an artist to listen out for in the future (and I wasn’t), those thoughts must have been confounded by her encore, Ysaye’s third sonata “Ballade”, dedicated to George Enescu. Within its complex monologue she found much of interest to say, with the tones and inferences drawn from her 1730 Guarneri del Gesu as varied in utterance and imaginatively yet cogently phrased as you could want.

César Franck’s Symphony in d minor is not as commonly heard as one might wish for, despite containing some excellent musical ideas and being of the boldest orchestration to make it a real crowd-pleaser. Indeed, the last time I heard the work was with Cristian Mandeal conducting the Belgian National Orchestra in 2007 when the performance emphasized the more Germanic structural aspect of the work, and it was a thrilling occasion because of that, rather than the flexible elegance which is also found within it more often thought of as French in mood. This performance with the Royal Philharmonic Orchestra succeeded in mediating between the symphony’s opposing aspects most effectively. Conducting from memory, as he had in the Beethoven, Mandeal conjured an imposing opening movement, ruminative in the broad brushwork of its structure and sustained in its intensity. With the orchestral tone built from the dark yet pliable double basses upwards through sonorous cellos and violas towards the sensuous yet forward violins the dramatic gift of Franck’s conception for a conductor with Mandeal’s unerring ear for transition and internal contrast, not to mention willingness to push dynamic levels in the successive climaxes of increasingly blistering intensity. This really was edge of the seat music making not for the faint-hearted, and in a larger hall with more warmth than hardness to its acoustic the effect could have proved more thrilling still. The middle movement might have initially appeared more Gallic in tone with the harp playing over pizzicato strings, but the music’s natural weight registered itself willingly as it progressed, deft handling of individual phrases and transitions of material moulded attentively into the whole under Mandeal’s baton. The closing movement’s summation and drawing together of much of the preceding material offered an opportunity for Cristian Mandeal to make one last push in favour of Franck’s lone symphony. This he did, drawing playing of uncommon warmth and vigour from the orchestra. The final ascent carried a sense of inevitability about it, at once momentous and gratifying, that made one hope that it would not be long before its like could be experienced again.