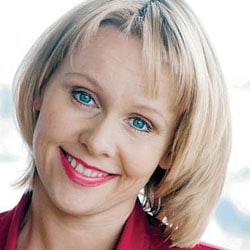 A concert with themes of autumn and remembrance seems particularly fitting for the month of November, and surely there are few better ways to encapsulate these concepts than a performance of Strauss Four Last Songs and Brahms German Requiem. A common thread of desperate anguish and loneliness runs through both these works, but neither can be described as disheartening both composers weave these bleak themes into succulent harmonies and extravagant melodies which embody above all the sense of resignation, acceptance and, in the Requiem, hope.

The Norwegian soprano Solveig Kringelborn was far and away the star of the evening. Rarely does one see a singer so captivating; she projected real enthusiasm and enjoyment of the Strauss, employing heartfelt and uncontrived gestures during particularly emotional phrases to enhance the meaning of the German text. Hers is not a particularly huge voice, but her silvery, vibrant tone flowed easily in and out of Strausss rich orchestral textures, filling the Royal Festival Hall with a deft confidence and sparkling brightness which lent itself perfectly to the elongated phrases in this work.

The Royal Philharmonic Orchestra was clearly also enjoying Strauss’ rich harmonies and displayed great vitality, with a particularly beautiful violin solo in Beim Schlafengehen and the energetic violin rainfall duet in September, both executed with finesse and musicality. Conductor Brian Wright displayed some superb manipulation of the orchestras energies, ranging from an unbridled fortissimo from the violins playing in octaves in Im Abendrot, to sublime pianissimi during Frhling, where beautifully blended sustained orchestral chords were made particularly magical by superb playing from the three flautists, who enhanced the sound with their gossamer tones.

Kringelborn changed from her stunning red frock into a more subdued blue one for the Brahms Requiem, but her singing was no less impassioned and energised in her Ihr habt nun Traurigkeit, which was a breath of fresh air after the heavier preceding movements. The young baritone Jacques Imbrailo brought a powerful and resonant sound to the stage in his Herr, lehre dich and gave a dramatic and compelling rendition of Siehe, ich sage euch ein Geheimnis.

The 130-strong Goldsmiths Choral Union produced a well-blended sound and clear diction, displaying an obvious ease with the German language. During the livelier and more passionate movements of the Requiem, they sang with conviction and gusto, with a particularly rounded and resonant sound from the bass and alto sections. Unfortunately, this did little to mask the fact that the sopranos were a quarter-tone flat for most of the performance. Unfortunately the entire choir also slipped by almost a semitone during the quiet unaccompanied passages in the Selig sind movements at the beginning and end of the work, where sadly a lot of the performance energy was also lost. Nevertheless, the vivacious orchestra more than compensated; once again they made telling contributions, with some particularly rousing melodies from the brass section in the sixth movement.

It seemed a great shame that the hall was less than half full for this concert; it is already difficult enough to pull crowds on a Wednesday night without the added hindrance of a tube strike another evening, this attractive programme might have sold out. However, the depleted audience numbers apparently did nothing to dampen the spirits of the soloists and orchestra, who projected such enthusiasm in their performance that it was impossible to be aware of anything other than the music. A compelling and captivating performance from a highly charged orchestra and a supremely excellent soprano one hopes to see them working together again soon.