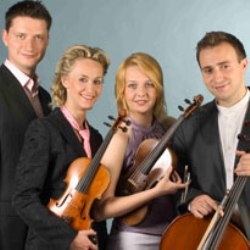 Whilst most of the UK was watching England’s defeat in the football on Saturday, the Wigmore Hall was presenting an evening dedicated to Mozart’s victory over the piano concerto. The programme began with a talk on ‘Mozart’s Viennese Piano Concertos’ given by Simon Keefe. Keefe’s talk was interesting, comprising of a few good points, which were well made.

He expanded on them through illustrative musical examples, showing how Mozart’s ideas started and then developed into and beyond the conventions which they have become. A real sense of Mozart’s genius and innovation was conveyed. The concert that evening was comprised of BBC New Generation Artists.

The first thing that has to be mentioned are the outfits. The Royal String Quartet took it upon themselves to find uniforms. Perhaps they thought this would add to their commercial value. All it did, however, was look gimmicky, and it distracted from their playing, because they weren’t even tasteful! They consisted of unpleasant swirling, sparkling dresses for the ladies on the violins and scary Ibiza-nightclub-owner striped shirts for the men on the other side.

Note-wise they were accurate and there were some pleasing moments. However, their sound was generally unbalanced, with a strong but forced sound often coming from the lead violin, and some more unconvincing areas, where it seemed that the cello and viola had lost connection with the rest of the group.

Thankfully Cédric Tiberghien came on with a boring black suit and bowtie. However, his distinctive and pleasant features gave more than enough visual stimuli.

Tibergien has an impressive repertoire of over 40 concertos under his belt. With his natural affinity for the piano, he apparently had no difficulty in performing at short notice on behalf of Lucy Crowe, who was indisposed that particular evening.

After a somewhat shaky start in the Allegro movement of the Piano Concerto in C, K.415 (a couple of slight slips on arpeggios and sometimes a slightly uneven tone), Tibergien played the slow movement beautifully. His soft touch, which was perhaps a bit too gentle for the lively first movement, suited this more subdued style.

In the Rondeau, the strings came into their own. There was an improvement in style due to stylish ornamentation, and they seemed to have a better sense of communication (even though there still seemed to be something getting in the way). Particularly effective was the change from the Allegro back to the main theme towards the end. This bought out the composer’s clever and witty command of form and thematic material.

As an interlude to the two concertos, Tibergien played Mozart’s Fantasia in C minor, K. 475. This Baroque-inspired piece gave Tibergien an opportunity to monopolise the audience’s attention. Mozart famously took the eighteenth-century tradition of improvisation to new heights by intuitively producing complex structures and textures in concerts – whether they were small commissioned ones like those put on by his benefactors, or large subscription concerts that he organised as one of the first ever musicians to try to earn a living freelance. This Fantasia is thought to have started out as one of these improvisations. It has a playful sense of spontaneity which Tibergien bought out beautifully.

The last offering of the evening was the Piano Concerto in A, K. 414 (1782). The concerto opens with the string quartet who, in this case, unfortunately treated the light, carefree opening theme too harshly. It seemed as thought they were trying too hard to shine as individuals and therefore ended up competing inappropriately.

It was a shame that the quartet was disappointing. However, Tibergien was charismatic and quirky. He had a habit of almost conducting himself as he finished phrases by circling his lower arm. Cadenzas were played with relish and there was a sense of youthful passion, whilst maintaining an intelligent approach to the music.

These early concertos were written whilst Mozart was still very young, and it was fitting, therefore, to have a young player in this concert. It will be interesting to see how his career and his playing develop over the coming years.