Roll out the vaccines. In the meantime, the Wigmore Hall is still operating virtually. Barry Creasy visits from the safety of his home. 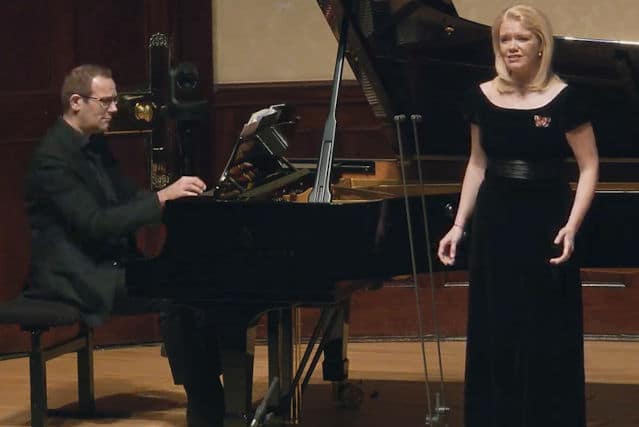 There is something warm and comforting about English song from the first half of the 20th century; it summons an era when television was decades away, and the radio provided hours of palliative music of yesteryear. Somehow, though, a voice in a lower register adds to the atmosphere: no showy tenors or sopranos, just the restful tones of a mezzo or baritone.

The mezzo Kathryn Rudge, superbly accompanied by pianist Christopher Glynn, delivered precisely this soothing balm on Monday, in their lunchtime recital streamed live from the Wigmore Hall. Rudge’s voice conveyed all the slightly restrained emotion of the songs (no Erlkönig melodrama here) with a perfection of expression, and it was a pleasure to see this reflected in her facial expression and body language: a truly communicative performance. Glynn’s playing was everything one would expect of an accomplished accompanist: always supporting the singer, yet bringing out the deft piano writing of these excellent crafters of melody.

Songs by Hamilton Harty and Roger Quilter provided the majority of the programme with a brief tour around Britain – Harty’s two sets representing Scotland and Ireland, and Quilter’s, as ever, firmly rooted in the English soil of past times with his Op. 12 Seven Elizabethan Lyrics from 1908. Sadly, although the first Harty (‘My Lagan Love’) was lost because of transmission problems, ‘Scythe Song’ and ‘The Song of Glen Dun’, though, were full of charming Scottish tropes. The songs in Quilter’s set were nicely contrasted, from the gentle rocking of ‘Weep you no more’ (so very different to the Dowland setting), through the busy piano counterpoint of ‘My life’s delight’, the no-nonsense country dance nature of ‘The Faithless Shepherdess’, the mournful ‘By a Fountainside’ (with its exquisitely lyrical second half) to the restrained grandeur of ‘Fair house of joy’.

Three Irish pieces by Harty followed these: the lyrical ‘By the Sea’, ‘The Lowlands of Holland’ – whose almost-martial swing brought out the power in Rudge’s voice – and the low, slow ‘Sea Wrack’, perhaps the only poem to a piece of seaweed ever set to music.

Quilter and Harty’s schooling had been very much in the Romantic tradition, and their works are always best set against pieces with more astringent harmonies, and Gerald Finzi’s Let Us Garlands Bring (a setting of five Shakespeare lyrics dedicated to Ralph Vaughan Williams) provided these subtle foils. Most famous is Finzi’s ‘Fear no more the heat o’ the sun’, and Rudge and Glynn gave this a slow, contemplative performance whose final lines of singing, accompanied only by the reverberating harmonics of the placed chords, were special indeed. The slow plodding of ‘Come away death’ was set against the bubbly piano of ‘Who is Sylvia’ – in which Finzi demonstrates his genius for pointing up Shakespeare’s caesuras and enjambments – the insouciance of ‘O Mistress Mine’ and the drive of ‘It was a lover and his lass’.

The programme finished with three songs by Eric Coates. Coates is normally known for his ‘light music’, but it was one of his other genres – scores for films – that was in evidence in these art songs. Rudge and Glynn brought out all the drama-in-miniature in these: the emotion in ‘I pitch my lonely caravan’ could almost have come from the pen of Sigmund Romberg; the introductory piano trilling in ‘Bird songs at eventide’ was forgivably corny, and the Sinding-esque ripple and bravura close of ‘Rise up and reach the stars’ was magnificently Olivia de Havilland. All that was really needed after this, for pure afternoon radio comfort, was the Shipping Forecast.

The concert is available to listen to on the Wigmore Hall’s website.