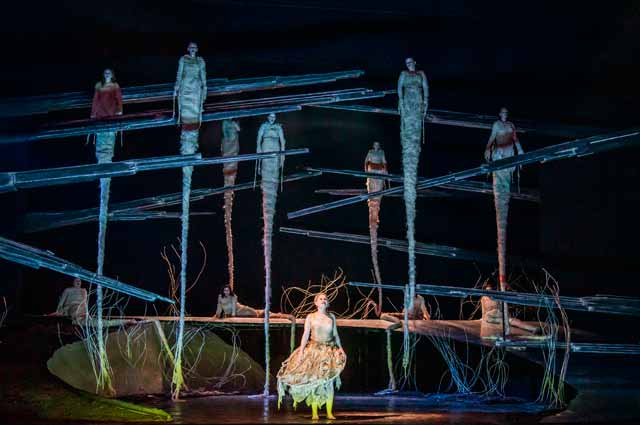 Third time around for Melly Still’s beautiful, challenging production of Dvořák’s Rusalka, a non-sentimental reading of the fairy tale, with Nature “Red in tooth and claw” very much to the fore. Robin Ticciati’s fervently romantic directing of the orchestra makes for a fascinating contrast; there were times when he might have been conducting Die Frau ohne Schatten or even Parsifal, so grand and sweeping was his take on the piece.

Sally Matthews is a Glyndebourne favourite, strongly associated with Mozart roles, and her very beautiful lyric soprano was at times a little taxed by Dvořák’s lines, especially in the ‘Song to the Moon,’ the first part of which she had to sing lying down. Nevertheless she grew in confidence as the evening progressed, soaring above the orchestra and producing just the right ecstatic tone for the final scene. Her father was sung by Alexander Roslavets with commanding line and phrasing, if at times a little reticent in characterization.

Her Prince was the American tenor Evan LeRoy Johnson, making his Glyndebourne debut; very tall and striking, resembling Woody Harrelson in his Cheers days, he cut a distinctive stage presence and sang with real ardour – there were some phrases which sounded as if he were singing Tristan. 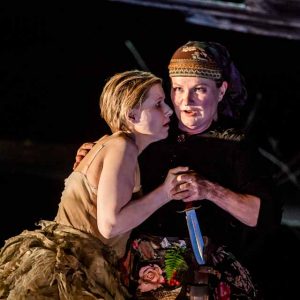 Patricia Bardon was a mocking gypsy of a Ježibaba, perhaps not as threatening as Anne Mason in the role; she was surrounded by a mob of bearded ‘witches’ who, with the brutal little Wood Nymphs and cruel Water Sprites, sang with both polish and gusto. The three central Wood Nymphs would terrify anyone who ventured into those glades expecting cute little denizens of the trees, and in Vuvu Mpofu, Anna Pennisi and Alyona Abramova we heard three very promising young voices.

Glyndebourne regulars will fondly recall Alix le Saux as a delicate, memorable Cendrillon, and here she showed her versatility with a feisty Kitchen Girl, partnered by Colin Judson’s vividly acted and finely sung Gamekeeper. Zoya Tsererina’s Foreign Princess was ideally aloof and grand both in her presence and her singing, and Adam Marsden gave the Hunter’s lines a haunting beauty.

Rae Smith’s designs are as enchanting as before, the watery scenes filled with limpid light and the fashion victims a burst of glorious colour. Rick Nodine’s Movement direction was stunning, with the water sprites in particular executing complex flourishes with seemingly casual aplomb. The lighting, so vital to the success of Melly Still’s production, was poetically beautiful in the ever-sensitive hands of Paule Constable.

There seem to have been a few subtle changes this time around; none of us could recall Rusalka whipping off her knickers at the Prince’s embrace, for example – but the overall concept remains as beautiful and engrossing as ever. With sublime playing by the London Philharmonic Orchestra under Ticciati’s inspired direction, this is as rewarding an operatic evening as you’ll find anywhere this season.