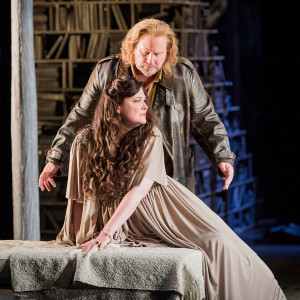 Anyone expecting swathes of drapery, ‘biblical style’ robes and sandals or indeed a ‘conventional’ orgy might be disappointed by this production, but those who appreciate the unconventional as long as it is appropriate and makes you look at a work in a new way, will come away from Grange Park feeling very happy. The director Patrick Mason has been inspired in part by the coinciding of the period of the opera’s composition with a rise in French anti-Semitism, and instead of what might be expected for Samson’s sojourn “Eyeless, in Gaza, at the mill with slaves” we see, in a 20th century updating, a striking presentation in which uniformed brass oppresses Ghetto-bound Jews. Does it work? Absolutely.

The very striking set by Francis O’Connor is one of the most imaginative we’ve seen; with a backdrop of frosty, stylized trees and undefined, shifting shapes it cannot help but recall such places as Treblinka, and the multi-level staging recalls an evocative photograph of the Warsaw Ghetto (included in the programme). Instead of the more usual masonry the interiors are framed by towers of books, suggestive of the learning, knowledge and history of the Jews, and when the Philistines celebrate the destruction of the Hebrew race they arrogantly burn books in another image which is suggestive of part of 20th century history. We do not have these images forced upon us, but they are there in our consciousness and the production makes poetic use of them, aided by a wonderfully atmospheric lighting design by Paul Keogan.

The interactions between the two principals are less definitive than what surrounds them, but both Carl Tanner (last season’s superb Peter Grimes) and Sara Fulgoni rose to the occasion in their crucial moments. Tanner’s Arrêtez,ô mes frères had the required heroic ring, and Vois ma misère,hélas was a gripping evocation of Samson’s devastation at his failure to defend his people. Some of Dalila’s music, especially in the lower register, was a challenge for Fulgoni but she shaped the arching phrases of Mon Coeur s’ouvre à ta voix with skill. Neither singer has idiomatic French or the kind of crisp diction one might hope for, and there was scant evidence of physical passion between them.

There was some fine singing to be heard amongst the minor roles, in particular Michel de Souza’s High Priest and Christophoros Stamboglis’ Old Hebrew; both displayed lucid French diction, and the latter in particular had us wishing to hear more of his lustrous, richly burnished bass. The Grange Park chorus once more covered itself in glory; in last season’s Peter Grimes it was impossible to imagine a more appropriately mean bunch of townsfolk, and here they were either deeply mournful as Samson’s dejected people or horribly braying and brutish as the caddish orgy-watchers and their molls. Great work from Philip White.

Gianluca Marciano obtained lush, passionate playing from the Bournemouth Symphony Orchestra, ideal for this sometimes overheated music. He whipped up a storm in the Bacchanal, but we won’t spoil the surprise for you by describing how that one is staged except to say that it’s unexpected. The same is true of the startling final scene in which the cult of Dagon is brought down, but the books which symbolize the rich traditions of Samson’s people survive.