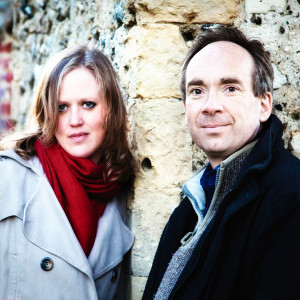 A ‘Schubertiade’ was a social gathering of Schubert’s friends, and is also the name given to a wonderful music festival in Austria; here in London, we had our own version this weekend, centred around performances of the great song cycles – and what performances they were. As well as Lieder, there was chamber music and discussion – and you could attend the lot for £40, or £25 if you qualified for a concession. The plan was for an “informal and friendly weekend,” and so it proved to be.

James Gilchrist and Anna Tilbrook are familiar names to lovers of song, yet Sunday’s Winterreise, ‘Fishy Songs’ and Schwanengesang were a revelation; perhaps it was the intimacy of the occasion, perhaps we were all just fired up at being there on a Sunday morning, or perhaps it was just the obvious – here was a partnership to stand with the very greatest. Gilchrist presented Winterreise as a no-holds-barred emotional journey, wearing his heart prominently on his sleeve; if you are not familiar with his style, think Florian Boesch as a tenor – and with equally good German diction.

‘Gute Nacht’ was built on the strongest contrasts, the rage of ‘Was soll ich länger weilen’ as powerful as the wistfulness of ‘Will dich im Traum nicht stören’ was heartbreaking. ‘Gefrorne Tränen’ was sung with a kind of numb acceptance, made all the more poignant by the searing quality of the phrasing at ‘des ganzen Winters Eis.’ ‘Frühlingstraum’ was sung and played with daring slowness and very piano, that bleak final chord just about as despairing as it can be. ‘Die Nebensonnen’ was exactly right – and how near-impossible that is to achieve, needing as it does a sense of rapt fervour without over-statement. Every song deserved analysis – not only for the singing, but the wonderfully sympathetic and never too self-effacing playing.

The ‘Fishy Songs’ provided a sense of light relief after lunch, with ‘Fischerwiese’ revealing Gilchrist’s genial side, catching exactly the right whimsical note at ‘Schlauer Wicht’ – and following it up with a wonderfully dramatic ‘Des Fischers Liebesglück.’ The highlight of this group was ‘Auf dem Wasser zu singen,’ the ecstatic lines floated as if on the breeze and the challenging accompaniment rippling along as though it were the easiest music in the world. These songs were followed, naturally, by a delightful performance of the ‘Trout’ Quintet, with especially strong playing from Ellie Fagg and Louisa Tuck.

Schwanengesang brought the day to a close, with a remarkable performance full of interpretative insights and emotional involvement. These songs are so familiar that it’s easy to fall into an ‘expected’ style, in terms of both singing and listening, yet Gilchrist’s ‘Liebesbotschaft’ set an entirely different tone – instead of the ‘gemütlich’ narrative which is the usual style, he sang it as if carried away with the rapture of the brook’s message, with lines such as ‘…wiege das Liebchen in Schlummer ein’ breathed with ineffable tenderness. Full marks to both singer and pianist for negotiating the terrifying ‘Abschied’ without putting a foot wrong, and the even more terrifying – in a totally different way – narrative of ‘Der Doppelgänger’ – with a genuine frisson at ‘eigne Gestalt.’

‘Die Taubenpost’ concluded a wonderful day; Schubert’s final song, performed with all those qualities which we mean when we say this composer’s name, but most of all an understanding that phrases such as ‘die Sehnsucht’ have so much more in them than is capable of verbal expression. Singing and playing of the very highest calibre, in a glorious setting – surely the success of this venture must inspire St. John’s to make Schubertiade a regular feature?