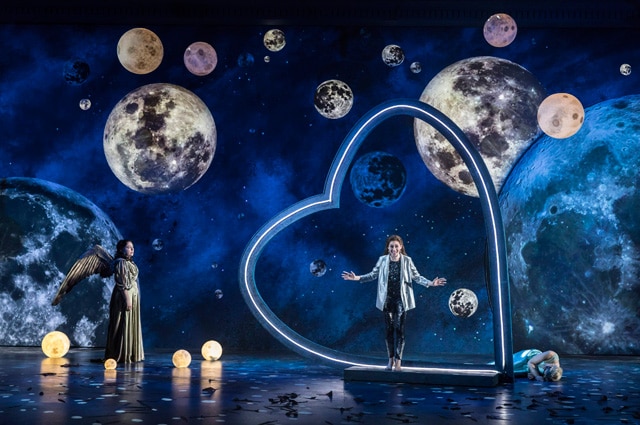 Semele is perhaps the perfect work for this ethereal opera house in its arcadian setting, and the intimacy of contact between stage and audience possible here is ideal for Handel’s music. When first performed at Covent Garden in 1744, the work was seen in a theatre which was at the then cutting edge of staging technology, so it’s always a challenge to provide effects such as a sudden change to Arcadia and terrifying thunderclaps in a simpler and more exposed theatre – these challenges are mostly met here in Annilese Miskimmon’s production, as are those posed by the considerable demands made of the singers.

In terms of both staging and performance, the style inclines towards that of Robert Carsen’s iconic version, seen at Aix-en-Provence in 1996 and again at ENO in 1999) although it is not quite so unified in concept, nor so original – but then, who could ever replicate Semele as Princess Diana and Juno as HM the Queen? Heidi Stober’s ambitious heroine might not have the crystalline brilliance of Rosemary Joshua’s tone, but she sang with clarity and confidence, remarkably so given that she had sustained a knee injury on the first night – doubtless subsequent performances will find this beautiful American soprano on even better form.

Robert Murray might not look like a Greek God, (but then nor did Anthony Rolfe Johnson) but he sang with elegance and sweetness of tone and rose above what seems some rather daft stage business with considerable grace. What a pleasure it has been to follow this very fine young tenor’s career from his early days at the Royal College of Music. 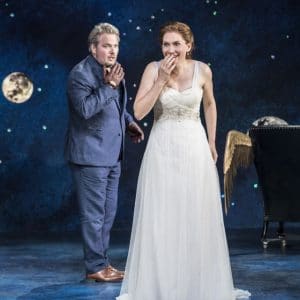 It is by no means an exceptional occurrence that the best singing on stage came from Christine Rice as Juno; she was saddled with having to sing complex music whilst acting as a mother in the throes of childbirth, yet she too rose above it to give an object lesson in Handelian singing of the very finest kind. Her lovely, burnished tone, supple phrasing and sensitive understanding certainly gave pleasure ‘above measure’ as the audience rightly recognized.

David Soar’s fine bass was heard to great advantage as Cadmus and Somnus, he too shining beyond some silly stuff, and Christopher Ainslie, despite not being in his best voice, sang with real style as Semele’s rejected earthly bridegroom. Jurgita Adamonyté and Lilo Evans are both young sopranos of great promise although the former’s diction is not quite there yet in terms of this libretto, and the latter seemed somewhat under-directed. Christian Valle made a strong impression as the Priest, and Mikael Onelius managed to remind you that Apollo is the god of the sun, prophecy and music despite his costume.

Garsington’s chorus, under the brilliant direction of Susannah Stranders, just gets better and better. Whether joining with Semele in lauding ‘Endless pleasure, endless love’ or solemnly intoning ‘Bless the glad earth with heav’nly lays!’ this was superb ensemble singing in every way. What a pity that the staging for the latter was not half so magical.

Jonathan Cohen and the Garsington Opera gave a sparkling, lively reading of Handel’s great music, providing so much wit and delight that the production’s occasional muddled concepts scarcely mattered. What is certain is that this is a show that will look marvellous on screen – it’s made for it, and you’ll be able to see why with the free screenings around the country, starting with Skegness and Oxford on July 1st, followed by Ramsgate, Bridgwater and Grimsby. garsingtonopera.org/news/opera-all-2017-screenings