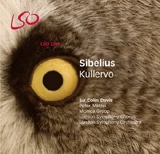 When the LSO opened their 2005-6 season in September with Sibelius’ Kullervo symphony, I was startled by the composer’s sense of the dramatic, something I don’t always associate with him.

Sir Colin Davis’ dedicated reading and the energies of the London Symphony Orchestra and Chorus made it a memorable experience, and the atmosphere of the concert has carried over to this live recording.

LSO Live, the orchestra’s pioneering in-house label, combines the immediacy of a live performance with the technical precision of a studio recording. Rehearsals and several performances are recorded, then additional recording sessions are held if certain passages require retakes. It’s a winning combination which made their recordings of Verdi’s Falstaff and Berlioz’s Les troyens so special; the former is currently up for a Gramophone award and deserves to win, whilst the latter won it a couple of years ago.

This recording of Kullervo is worth purchasing for any number of reasons. For one thing, it’s incredibly cheap and it’s now the best recording of the work currently available. More than anything though, the piece itself rewards further investigation.

Based on the Finnish folk-epic, the Kalevala, Kullervo is a five-movement work for baritone and mezzo-soprano soloists and male chorus. First performed in 1892, it made an instant name for the 26-year-old Sibelius in Finland, but he was very critical of the piece and withdrew it after a year. Certainly it’s different in many ways from his later numbered symphonies, which are rather more severe and tautly structured; perhaps that’s why its ruggedness and boldness come as a welcome surprise.

The clarity of the recording allows one to hear so many details that were lost in the concert hall. For example, the delicate writing for woodwind in the middle of the first movement took me aback, as this was slightly obliterated in the concert hall by the brass and strings. This movement depicts the tragic hero Kullervo, and a sense of national identity is given by the use of a folk song-style melody. The development of material is impressive, reaching a peak with a violin melody, cello bass part, brooding timpani and whistling wind instruments creating an emotional canvas.

The second movement is called Kullervo’s Youth and presents the sad youth of the hero. An obsessive repeated figure at the start involves a recurring triplet, the strings apparently sighing; here the LSO is at its finest, bringing numerous colours to each glorious phrase.

Yet it’s the final three movements that make both the work and this performance worth hearing. Kullervo and his sister opens with a jolly theme for the violins you can almost sense them sitting on the edge of their seats, ripping the notes off their instruments. Momentum is built, representing Kullervo’s journey on his sleigh. He lures a woman onto it, who later turns out to be his sister. The chorus describes her seduction in a malevolent and stark melody, here finding the LSC’s men in biting form and easily negotiating the tricky rhythms of the Finnish text. Monica Groop is particularly splendid as the sister, and Peter Mattei‘s distractingly awkward stage presence in the concert is of course no problem on the recording his baritone is warm and dramatic.

The LSO is again in fine form in the fourth movement, Kullervo goes to battle. The orchestra is simply the finest sound in London, so the recording presents the wonderful opportunity to take them home in your pocket. The opening oboes, the brass figure that plunges in, and the ensuing string melody it’s impossible to fault both the quality of sound and the technique of the players in these and most other moments of the recording.

Kullervo’s death is a grand finale indeed. The hero is tormented with guilt and returns to the place of his sister’s seduction. Motives from previous movements return in the chorus part, and Kullervo kills himself in a haunting finish to this 72 minute piece.

Colin Davis’ conducting is as spirited as ever, and on the whole, it’s an extraordinary recording.