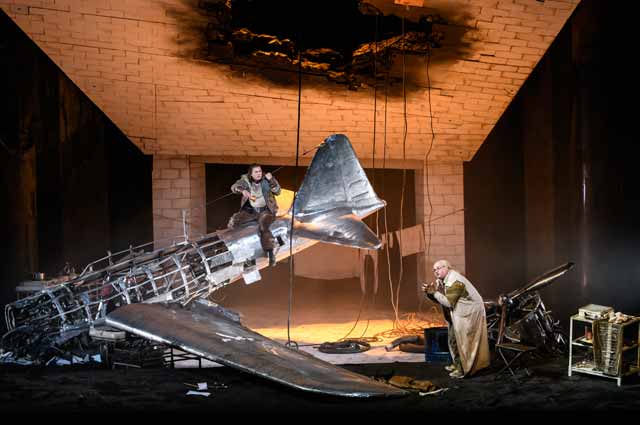 It is not unusual to feel in the very depths of Der Ring des Nibelungen upon reaching Siegfried, but in Keith Warner’s staging for the Royal Opera, currently enjoying its place in the second revival of the full Cycle, there is a particular amount in which viewers can immerse themselves. In fact, judged by their overall strength, and the extent to which they sound so secure over what are in many cases such enormous sings, it is hard to picture this line-up of soloists for the opera being bettered.

Act I sees Mime’s abode dominated by a crashed aeroplane. A small plane was introduced in Das Rheingold and highlighted Alberich’s aspirations at a point when his gold was piling up. Now, it seems to signify the gods’ own ambitions crashing down to earth, especially since The Wanderer first emerges from its cockpit. Featuring a plethora of props, including a pram from Siegfried’s childhood and various items for both forging and cooking, the cluttered stage provides a perfect space for Act I’s shenanigans to unfold. In this way, the comedy is kept at a premium, but it is not merely superficial, but rather used as a front to highlight the more serious and sad aspects of the story. There is naturally pathos in Siegfried learning about the death of his mother and father, especially since here the skeleton of the former is visible. After Mime declares that he took care of Siegfried after Sieglinde died, the hero appears to warm to him for a few seconds before the dwarf’s continued talking begins to suggest ulterior motives once more.

The interaction between Stefan Vinke’s Siegfried and Gerhard Siegel’s Mime is aided by the fact that both also played their parts in the previous revival in 2012. There is, for example, a wonderful moment when Siegfried in between his hammer blows to forge Nothung leans over to strike the lid of a container that Mime needs opening in order to prepare his brew. The various tools that lie around help to show how Siegfried is entirely re-forging the sword, as simply fixing it is as impossible as the gods retaining power by patching up the world as it currently exists. However, this point is undermined by Siegfried putting a hose to the plane to obtain fuel for the fire that he needs, because this implies that he is drawing from the gods in his endeavours.

Siegel, who has played Mime in this production since day one, is on top form, as is Vinke whose voice demonstrates almost superhuman levels of robustness and consistency over such a big sing. John Lundgren’s bass-baritone with its rich, dark sound is also perfect for the role of The Wanderer. If he showed in Die Walküre how this Wotan really struggled to accept that the future was not for him, here, after twenty years (or the time it has taken Siegfried to grow up), he has reached the position where most Wanderers are, which is still not an entirely straightforward one. In Act I he twice discards and twice retrieves the contract that he held with the giants to build Valhalla, which symbolises the way in which the character spends the final three operas of the Cycle proclaiming that he wishes for the end, while still taking many steps to intervene and possibly even claw things back.

The Ring Cycle takes place across the realms of nature, society and dream (or fairy-tale), with characters often crossing through an element to move from one to another. For example, Siegfried traverses the fire to enter the dream realm of Brunnhilde’s rock. The majority of the third opera, however, sees nature tainted by society in the form of Fafner’s power grab, and Mime and Alberich’s attempts at one. Warner emphasises this point in the ‘Forest Murmurs’ by utilising a similar floor rising trick to the one he used in Das Rheingold. As the floor ascends we are transported to a different place where Siegfried can be surrounded by pure nature, though it falls once more when Fafner appears. 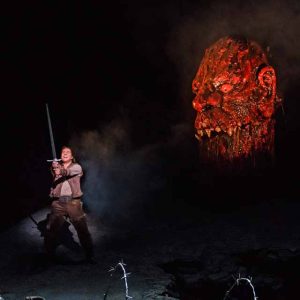 In this production Fafner is shown as a giant when we first see him and as he utters his dying words, with him only placing the tarnhelm on his head and becoming a dragon when he attacks, and is struck by, Siegfried. This has an effect on the plot because normally Siegfried pushes the dragon’s dead body in front of the entrance to the cave so that no-one else can steal the gold that he leaves behind. A giant’s disembodied head and the body of a dwarf are clearly not enough to protect the hoard, but Warner covers against this point. When Siegfried kills Mime, Johannes Martin Kränzle’s Alberich while letting out his musical laugh (which normally only signifies his delight at his rival being dispatched) actually grabs the gold.

Brindley Sherratt is brilliant as Fafner with the real depth in his bass coming to the fore as each sound is rolled and shaped to perfection. Heather Engrebetson is an exceptionally accomplished Woodbird, bringing precision and nuance to every note, while Wiebke Lehmkuhl’s Erda interacts well with Lundgren’s Wanderer in an electric scene. It begins with an agitated Wanderer spinning around on an undulating plane, and ends with him putting Erda to sleep forever by actually driving his spear into her.

Lundgren also interacts well with Vinke as he shows both pride in seeing the hero stand tall and strong, and genuine hurt that his own grandson could be so rude and disrespectful. After the spear is smashed a wall revolves to reveal alternately the triumphant Siegfried on one side and the defeated Wanderer on the other. It seems like the saddest ending imaginable for the latter when it rotates for a final time simply to reveal that he is no longer there.

With endings, however, come new beginnings, and Siegfried’s waking of Brünnhilde is amazing as both Vinke and Nina Stemme sing at the top of their game. Stemme also proves exceptional at delineating Brünnhilde’s various thought patterns, but, although it is still clear that she is more wise and philosophical than he, this Siegfried does not seem so out of his depth as some. He does provide answers to all of her points, even if they feel a little basic in comparison, and thus seeing both come across as such strong characters aids the emotional power of the scene. Suffice to say, since it means being treated to far more of this pair, and Sir Antonio Pappano’s outstanding conducting, it is impossible not to look forward to the final instalment in the Cycle, Götterdämmerung.

The Royal Opera’s production of Die Walküre will be broadcast live to selected cinemas in the UK and worldwide on 28 October, while some cinemas will also show encore screenings over subsequent days. For details of participating venues visit the Royal Opera House Live Cinema Season website.