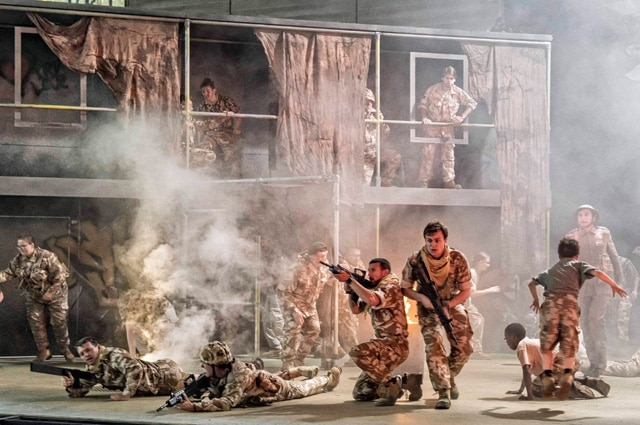 Roxanna Panufnik has chosen to describe her new creation Silver Birch as a people’s, rather than a community, opera in order to emphasise the extent to which it is intended to transform people’s lives. It is a noble aim and one that seems to be very much fulfilled. It is obvious that the work has had an enormous impact not only on the 180 children and adults who have been involved in an opera for the first time, but also the professionals working alongside them and even the audience who have been able to appreciate the talents and endeavours of the performers.

The story concerns two brothers, Jack and Davey, who become soldiers. Their upbringing has not been entirely happy as mother Anna has done her best by them but father Simon has arguably failed in his duties. He certainly feels that he has though, and employs a form of tough love to ensure that his eldest son Jack does not make the same mistakes as him. This backfires, however, when Jack decides to join the army to prove himself, and Davey follows suit. While they are away from home, the family’s two younger children, Leo and Chloe, struggle with anxiety, while at the front Jack saves Davey’s life but kills an enemy soldier in the process. When they return home Jack suffers from post-traumatic stress disorder, knowing that this soldier also had a mother and father. Having won the war, he struggles to win the peace in his mind.

Jack loves the poetry of Siegfried Sassoon, who throughout the evening stands as a largely silent presence surveying the action. In this way, the opera argues that both the physical and metaphorical battles that were fought during the First World War are still on-going as people still go off to fight. The opera works precisely because it has a life affirming message yet simultaneously feels hard hitting. Jack and Simon are finally reconciled but it is clear that the positive conclusion that everyone must help each other derives in part from the fact that so many people today face horrors that require such support. The opera also succeeds because it is not told in the abstract, but is actually inspired by the real life experiences of soldier Jay Wheeler to the point that Jack is essentially Wheeler. 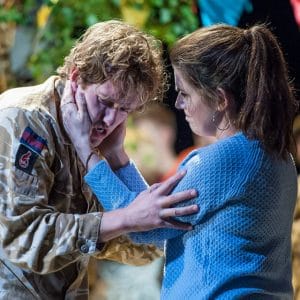 Panufnik’s music is both strong and accessible. It is designed to stretch the singers rather than patronise them, and yet is set up so that intriguing effects can be generated from music that is manageable for large groups to execute to a high standard. For example, the various vocal lines often enter at different times so that, while harmonies are created, any singer would be able to hear their own line as the dominant one. Much use is made of mass chanting of words accompanied predominantly by percussion, which generates some very interesting sounds. Jessica Duchen’s libretto is highly effective, and includes poetry by Sassoon alongside popular songs. For example, one particularly successful scene sees a chorus of children in the playground singing and marching a routine to ‘O Soldier, Soldier, Won’t You Marry Me?’.

The chorus is divided into several companies of children and adults including the Primary Company, comprising children from seven schools, the Youth Company, the Foley Company and the Adult and Military Community Company. The sound they produce is of an extremely high standard, and their mass entrances onto the various levels of the two tiered set always feel slick and professional, showing how well they have worked with director Karen Gillingham. The costumes are colourful, lighting effects moving and sound effects convincing, while a complex marching routine in which a mass of soldiers exercise is one of the evening’s highlights.

Artistic director Douglas Boyd conducts the Garsington Opera Orchestra, which for the occasion includes several children and students, while from among the professional singers Sam Furness as Jack, Darren Jeffery as Simon, Victoria Simmonds as Anna, James Way as Davey, Bradley Travis as Sassoon and Sarah Redgwick as Jack’s teacher stand out. No less impressive, however, are the child performers William Saint and Katya Harlan who play Leo and Chloe with immense skill and polish (casts for these parts vary over the run).

It is possible to identify the odd weakness in the story, such as the fact that the character of Davey feels a little underdeveloped. In addition, the silver birch of the title, which Simon and Anna plant when Jack is born and stands as a symbol both of damage (as it is lopped) and resilience, takes centre stage physically but not metaphorically as its significance tends to get lost amidst all of the opera’s other points. Nevertheless, these are minor quibbles in the face of a work that it is safe to say is having an impact on performers and audiences alike, and which stands as one of the very best examples of this type of opera.