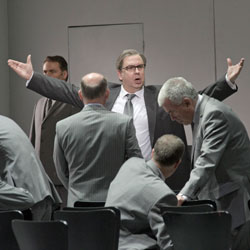 The complex plot and intricate historical background to the story of Simon Boccanegra is a problem that has pervaded the history of Verdi’s masterpiece; difficulties with the original libretto led the composer to revise the original version, and audiences often struggle to make sense of the relationships between characters in Gutiérrez’s story. ENOs latest production brings new light to this opera and tackles its complex plotline in innovative ways.

Making his ENO debut, director and set designer Dmitri Tcherniakov has adopted the monochrome style that seems so fashionable in productions today his sets are for the most part clean and simplistic, and nearly all are black-and-white, or painted with subtle hues, and there is little colour in the lighting scheme. The Grimaldi house is pure white and sophisticated, the Senate House grey and corporate, the city itself beautiful yet austere. These simple yet intelligent visual concepts balance Verdi’s luscious score and the satisfying dramatic pace of the plot.

Some beautiful work has been done with video throughout the production; a beautiful still shot of the first set is projected over the later white sets from time to time, creating a wonderfully effective sense of nostalgia and déjà vu. During scene changes, the background to the plot is helpfully explained through text projected onto a curtain, which is no bad thing with this complex storyline.

If there is a fault with this production, it is that the largely bland male costumes occasionally make character differentiation difficult for the audience early on in the show. Amelias bridal gown in the final scene, however, deserves a mention as an absolutely stunning creation; indeed, her character is fashionably and attractively clad throughout.

The cast of Simon Boccanegra is generally strong. Bruno Caproni excels in the title role; his expansive Verdian baritone coupled with a commanding but sensitive stage presence allows him to explore all the dramatic corners of his character, and draws sympathy and compassion from the audience, particularly in the last scene, where he captures eloquently the pathos of the dying man. Peter Auty’s stratospheric Verdian tenor makes the vocally challenging role of Gabriele Adorno sound easy. His calm and confident stage manner, coupled with a biker costume, allows for a more charismatic side to his character to shine through. Brindley Sherratt’s dark dramatic baritone lends itself well to the role of Jacopo Fiesco; indeed, his singing is so fine that one wishes he had more time on stage. Mark Richardson makes an assertive Pietro and Roland Wood a confident Paolo, although the latter lacks the vocal depth attained by the rest of the cast.

The star of the evening for me was the enchantingly beautiful soprano Rena Harms in her ENO and role debuts as Amelia Boccanegra. Her incisive, rich and open sound filled the Coliseum effortlessly and she gave an innately musical performance, with some particularly sublime soft passages. Dramatically she is extremely accomplished, and conveyed simultaneously Amelia’s youth, compassion, flirtatiousness and deep devotion to her family and lover. The chemistry between Harms and Auty throughout the opera was electric, and her heartfelt allegiance to her father made for an extremely touching reunion scene.

Diction and projection across the whole cast is superb; combined with an excellent English translation: ENOs perfectly timed surtitles were almost superfluous. Interplay between the principals is snappy, and a bustling and rowdy chorus adds another layer of excitement to the crowd scenes, as well as producing some fine offstage chorales. Edward Gardner once again displays exquisite handling of the superb ENO orchestra, reflecting and capturing the dramatic tension of the plot in his use of tempi and dynamics. This is a classy and well-produced interpretation of Verdi’s opera, capturing the drama and pathos of the plot without ever distracting the audience from the music.