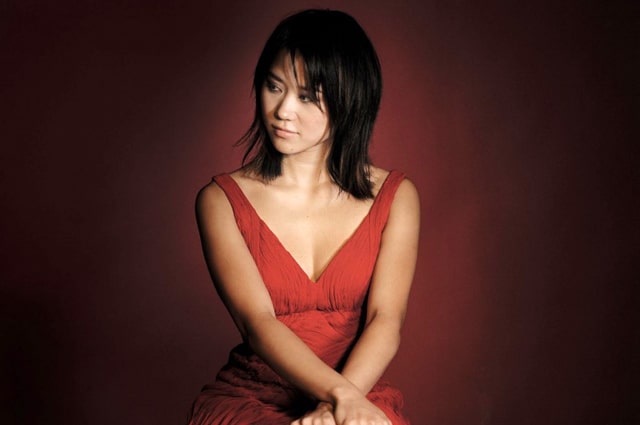 Gustavo Dudamel and his orchestra remain one of the great interpretative partnerships of large 20th-century works, and the orchestra’s energy and brilliant musicianship continue to combine to produce a honed and focused product under his enthusiastic yet highly intelligent control. Turangalîla is a complex work, a massive glittering tapestry full of birdsong and sex, religion and mysticism, yearning and fulfilment, and the orchestra gave all of these aspects full measure – from the frequent insistent oddly-accented rhythmically moving-crotchet passages, to the busy, splashy brass-heavy moments for full orchestra. The sinuous piano-and-celesta opening of the second movement became a smoky jazz number underpinned by a wandering acoustic bass, and the almost-fugal passages in the fourth and ninth movements felt even closer to becoming complex counterpoint than usual. The symphony also has the capacity to remind the listener of other works, and Dudamel accentuated these moments. The lush string chords of the sixth movement felt as they could almost have been written by Richard Rodgers; the celesta ‘twinkles’ over the romantic chords at the close of the eighth movement recalled the last bars of the presentation of the rose from Rosenkavalier; the swaying Latin feel to the tenth movement reminded us that the first performance of the work was conducted by Leonard Bernstein, who had, at the time, just begun writing West Side Story. Indeed, it seems a cliché , but the performance by a South-American orchestra and conductor certainly added a more Latin feel to the work – the rhythmic string passages throughout had more edge to them; the fever-dreams of the sixth movement felt somehow steamier.

The 1979 film 10 gave the world the sexual overtones of another French composer’s Latin piece, Bolero, but in Dudamel’s interpretation of Turagalîla we were shown an infinitely more complex act of love that involved mystery, lust, languor, reverie and humour. Until recently, the work has been seen as a full ensemble piece, but the piano part is so prominent and virtuosic, that it has now become fashionable to arrange the stage as for a concerto – with the orchestra behind, and the piano featured as a solo instrument – and so it was in this performance. The pianist was Yuja Wang, wearing one of her stunning outfits, six-inch silver stilettos and a matching silver-lamé dress that stopped mid-thigh, and, doubtless, traffic too. Ms Wang displayed an effortless brilliance, tackling fistfuls of notes in the noisy rhythmic passages, and the haunting quiet birdsong imitations, with equal verve. Also featured front-of-stage was Messiaen’s signature instrument, the grown-up cousin of the theremin, the ondes martenot, which was played with delicious engagement by Cynthia Millar. The symphony is incomplete without this instrument, which provides glorious whooshing glissandi across the massive brass chords, eerie electronic echoes to the vibraphone, and comedic warblings and quacks to punctuate the more traditional orchestral textures and add to the extensive range of percussion instruments. Perhaps the only slight criticism was that just occasionally, the volume felt too much under control; the last movement finished in a blaze of sound, when the brass were finally allowed to overpower the rest of the orchestra; somehow, though, it would have been just perfect if the same abandoned effect could have been allowed in the famously joyful fifth movement – ‘Joy of the Blood of the Stars’.