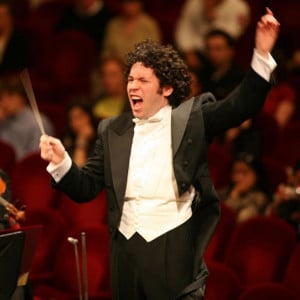 It may seem odd that an orchestra surely guaranteed to sell out the Royal Festival Hall regardless of its choice of programme should have focused on the most popular works of (arguably) the greatest composers of symphony and opera. The first of two appearances by the Simón Bolívar Symphony Orchestra of Venezuela at the South Bank Centre this week, however, would seem to represent the ultimate attempt to meet a European audience on its own ground. I do not believe that it should have to do so in every concert that it stages, but its execution of the works certainly proved interesting.

Gustavo Dudamel’s interpretation of Beethoven’s Symphony No. 5 in C minor presented the work both as a monumental and sprightly composition. The balance between these two disparate aspects to the piece was for the most part kept very well, although the performance was at its weakest when it let one element dominate over the other. The final Allegro was rendered with a great deal of passion and pace, but at other times tempi were slowed to a less palatable degree, even though the precision in playing remained uniformly strong throughout.

A parallel point could be extended to other areas of the performance. On some occasions, Dudamel’s ability to delineate different lines from the orchestra helped to maintain balance and integrity, but on others it felt as if our attention was being unduly drawn to the entrances and contributions of certain instruments, which was to the detriment to our feeling for the piece as a whole. Despite these criticisms, this was undoubtedly an excellent performance and the playing of the crucial quartet of wind instruments was outstanding.

If Dudamel was often successful in marrying drama with the considerable technical demands of what is a model symphony, his task in the second half of the concert was perhaps slightly easier. This is because, in crude terms at least, Der Ring des Nibelungen is more conducive to the single-minded pursuit of drama. The ‘Entry of the Gods into Vallhalla’ from Das Rheingold was the first of the five excerpts played and was highly successful in tempering the ethereal beauty and ultimate power of the music with the more sinister undertones of the scenario. The Rhinemaidens’ lament rendered in the wind (no singers featured at all over the evening) provided sufficient pathos, and even though the music began after Fasolt had been killed, there was still a real sense in which this superficially triumphant display was papering over rather uncomfortable truths.

‘Siegfried’s Rhine Journey’ from Götterdämmerung was powerfully done, with excellent texture and colour being brought to the various motifs contained with it. His ‘Death and Funeral Music’ was then suitably masterly with the surges in sound being followed by equally poignant (and skilfully managed) recessions. The excellent ‘Forest Murmurs’ from Siegfried featured beautiful birdsong from the woodwind, while the ‘Ride of the Valkyries’ suffered not one jot from a lack of onstage action. There can, after all, be few more thrilling sights than that of twelve double basses, and over a hundred other strings, really pushing for the ultimate.

It is a shame that the concert version of the ‘Ride’ has such an abrupt and anticlimactic ending, but happily this was not to become anyone’s final memory of the evening because the orchestra then delivered a beautiful encore in the shape of a radiant performance of the Liebestod from Tristan und Isolde.

This concert will be broadcast on Classic FM at 9.00pm on Wednesday, 14 January. The Simón Bolívar Symphony Orchestra of Venezuela’s second concert at the Royal Festival Hall featuring Orbón’s Tres versiones sinfónicas and Mahler’s Symphony No. 5 will be broadcast at the same time the following evening.