Music venues are due to close to live audiences in the latest lockdown. But, not before Benjamin Poore’s visit to the Wiggy. 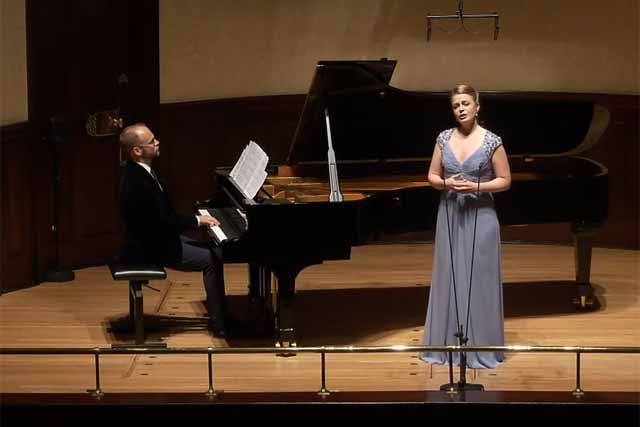 Travel restrictions across Europe have meant a fair few disruptions to the programming ambitions of concert halls like Wigmore who have reopened – though are at time of writing set to shut their doors to audiences once more.  On Friday soprano Siobhan Stagg and pianist Jonathan Ware had to step in for the scheduled Claron Mcfadden and Alexander Melnikov. Stagg is one of a number of outstanding Australian female vocalists making her name on international opera stages. This was her Wigmore Hall debut. Her programme was a potted history of European lieder, beginning with stage-setting songs by Beethoven before some of Schubert’s most famous and definitive contributions. A detour via France and Debussy’s hothouse settings of Paul Verlaine then swung back to the German tradition in four songs by Richard Strauss.

Stagg and Ware handled Beethoven with restraint, holding off the glimmers of a Romanticism to come; ‘Zärtliche Liebe’ had the lightness and sweetness of Die Zauberflöte rather than the determined passions of Leonora in Fidelio – though the raised emotional temperature of ‘Neue Liebe, neues leben’ certainly pulled us towards Beethoven’s later lyrical effusiveness. ‘Adelaide’, Beethoven’s famous early song, has an ambitious structure that can be hard to knit together, and wanted a little more contrast and contour to map its emotional journey.

Ware had his work cut out in the accompaniments to ‘Gretchen am Spinnrade’ and ‘Erlkönig’. Stagg was compelling in these dark settings of Goethe, offering striking narration in the latter and a restless, uneasy atmosphere in the former. In ‘Erlkönig’ we got a particularly vivid realisation of the poem’s characters in Stagg’s straight-toned sound for the son’s increasingly fevered interjections, a boy soprano timbre that grew artfully strained and distressed. ‘Du bist die Ruh’’, one of Schubert’s most radiant settings of Rückert, struggled to settle and called for greater stillness and bloom.

It was in Debussy’s 1886 Ariettes oubliées that Stagg shone most brightly. These six concise settings of Verlaine were written for Mary Garden, who would go on to create the role of Mélisande in Debussy’s eponymous sole opera – a role for which Stagg herself has been acclaimed. Ware clearly relished the dangling Tristan-like harmonies Debussy imported from Wagner, particularly in the haunting call of ‘Le rossignol qui, du haut d’une branche’; he showed similar delicacy in the glassy, glistening opening of ‘Il pleut doucement sur la ville’. Stagg balanced declamatory and descriptive passages of text in these songs with a rich legato, finding colours both luxurious and haunting in the lower reaches of ‘Le Rossignol’. There is nothing more exciting than quiet singing. The final song of the sequence, ‘Aquarelles II. Spleen’, began with a spectacular passage of hair-raising softness and intimacy.

Stagg has won awards for her Strauss, and her delivery of these final four songs – ‘Ich wollt’ ein Sträusslein binden’; ‘Du meines Herzens Krönelein’; ‘Schön sind, doch kalt die Himmelssterne’; and ‘An die Nacht’ – showed why. Her delivery eschewed emotional or expressive extremes that can sometimes distend these works, where singers try to condense Salome or Elektra into three-minute chunks of art song. Instead Stagg opted for a unfussy legato and decorous phrasing, hinting at Strauss’ fascination with the 18th century – all wit, artifice, and polite humour.  More operatic unfurling came in ‘Schön sind’, which had hints of Ariadne auf Naxos’ ‘Es gibt ein Reich’ in its lyrical expansiveness and breadth. ‘An die Nacht’, Strauss’ luminous setting of Brentano, began with a ghostly, dramatic exhalation that was a foretaste of Hallowe’en magic, before reaching in incantatory intensity in the final verse. Ware and Stagg sent us floating out into the night with one final song from Debussy, Nuit d’étoiles.