Audience attended performance begins to flourish. Benjamin Poore was happy to return to the Barbican. 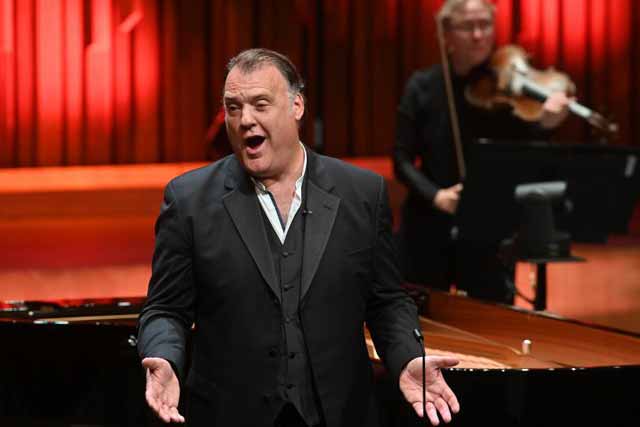 The Barbican is one of the first major concert halls to reopen its doors to an audience since music has crept back into our lives this autumn. Bass-baritone Sir Bryn Terfel was joined by the strings of the Britten Sinfonia as well as the oboes of Nicholas Daniel and Myfanwy Price for a Bach cantata and songs by Finzi and Ivor Novello.

“Like Montaigne”, John Eliot Gardiner writes in Music in the Castle of Heaven, “Bach sought to deprive death of its powers to terrify.” Ich habe Genug, BWV 82, must be one of the most conciliatory of Bach’s cantatas, led by solo bass and oboe. The oboe’s opening gesture evokes the pleading of the famous ‘Erbarme dich’ in the St. Matthew Passion – it is music that moves from a restless, quietly imploring opening to the peaceful acceptance of ‘Schlümmert ein, ihr matten Augen’ (‘Close in sleep, you weary eyes’), before a rushing, triumphant finale. Terfel’s voice sounds on finer form than ever, bravura in the last movement’s coloratura, incisive but never declamatory in the glowing recitatives. The warmth and richness of his voice in ‘Schlummert ein’ gave that lullaby a particularly valedictory character, matched by the cor anglais of Nicholas Daniel, who provided a dark cushion for Terfel’s timbre. In the first movement Daniel’s oboe afforded reflective, almost philosophical, interludes against the text’s unaffected keening. Terfel’s gently coloured vowels were particularly effective tender final caresses of the penultimate recitative: ‘Der Abschied ist gemacht, Welt, gute Nacht!’ I have made my farewells, world – good night. Terfel is hardly associated with Bach’s music, but one can image a breathtaking Christus in the Matthew or John Passions.

Gerald Finzi’s settings of verses from Twelfth Night followed, in an arrangement for strings and voice crafted by the composer. Written in 1942 in the midst of the war’s turmoil, Let us Garlands Bring has moments of uneasy melancholy, punctuated by ambiguous moments of repose. Here the Britten Sinfonia shimmered and glowed – particularly in ‘Who is Sylvia’? and ‘A Lover and his lass’ – demonstrating the ease with which they can slip in and out of stylistic clothing. Terfel’s understated delivery tapped into the work’s wistful, autumnal mood with his easy, avuncular manner; more effusive, excitable songs – his ‘Hey Nonny Noes’ in the last number – had the life-affirming vitality of the welshman’s famous characterisation of Falstaff.

“Terfel’s voice sounds on finer form than ever…”

Terfel’s charm makes him a carefree exponent of lighter song, which made up the rest of the programme. Traditional Welsh folk songs sat beside the work of his countryman Ivor Novello, many of them arranged by composer Iain Farrington, who joined the ensemble at the piano, providing some keyboard ripples of showtime glamour.’ I can give you the starlight ‘was pure charismatic Welshman, sung with gravitas and a little twinkle in the eye. Terfel is particularly good at singing to the whole audience – warming through even a sparsely populated hall.

Myfanwy Price joined Terfel for the Welsh song All through the Night (Ar hyd y nos). She is Nicholas Daniel’s partner in a new scheme for young musicians set up by soprano Barbara Hannigan, and called ‘Momentum,’ where performers with burgeoning careers are matched with a more experienced mentor to share programmes and performances. Her playing that night, also accompanying Terfel in one of two encores, was buoyant, agile, and delicately lyrical. Nicholas Daniel would also return to play alongside Terfel, whose creamy delivery of Novello’s music in particular was luxurious indeed. As is to be expected he sings beautifully in Welsh, finding great textures and variety in its various diphthongs and glottals, and makes one long for a recital of words set to music in that language on a smaller scale.

Clean orchestral textures meant balance and swiftness of execution (the Britten Sinfonia led that evening by Jacqueline Shave), and Terfel’s precise delivery stopped us from lapsing into cliche. This was gentle music making – nourishing and heartfelt, but never sentimental; Terfel’s final exhortation to keep the home fires burning, pace Novello, was cheering stuff indeed. The Barbican’s autumn season will be available to stream online too, until December.